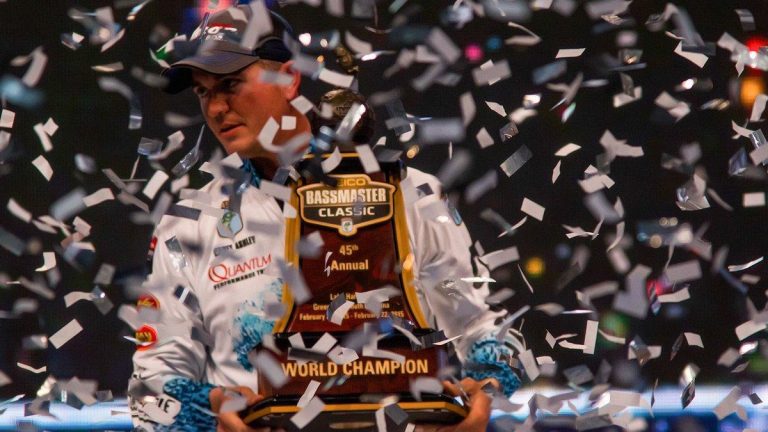 Casey Ashley of Donalds, S.C. weighed 20 pounds, 3 ounces on the final day to give him 50 pounds, 1 ounce for 3 days and the title of 2015 Basssmaster Classic Champion on Lake Hartwell near Anderson, S.C.

“This is a dream come true; it really is,” Ashley said. “I’ve wanted to be a bass fisherman since I can remember. To do it here, it’s hard to put into words. I caught my fish this week on baits my dad made for me and told me that I was going to win the Classic on.

“I’m a dock fisherman. I love to catch fish with jigs on docks. That wasn’t working this week. I spent too much time the first two days trying to catch fish on jigs on docks. I stayed deep all day today on the spots I had been starting on I was surprised to see how many fish were there today. I was catching them on a Blade Runner underspin. I love to start with that lure. I got there today and graphed over them and I saw the fish were suspended and moved up to the flat away from the timber and I could really get to them with the Blade Runner. They were deep in the timber in practice and they finally moved up where I could reach them.

“The bait my father rigged for me is nothing special. It’s a lure we fish all the time. It’s a pony head do-it mold with a Sampo Swivel. It’s got a 4/0 Mustad hook in it and then a small 3 1/2 willow nickel-finish blade. The key is the good high-quality swivel. I paired it with a Zoom Fluke Jr.

“A lot of guys fish those baits different than I do. I make long casts with it. And let it go down and fish it painfully slow. When the ice was in our rods the first day, I had to dip my rod in the water twice on each cast because it took me so long to retrieve it on a long retrieve.”

Today the fish really bit for a lot of anglers and came up schooling in a lot of areas of the lake. There were some good limits caught quickly on Sunday morning that accounted for a lot of the shakeup on the leaderboard today. Several anglers were able to catch them fast and furious for the first couple of hours with the warmer temperatures and overcast skies. Ashley caught them fast and furious on both of his key deep spots.

Here is how the rest of the field said their fishing went this week:

I thought I found the magic dock today. I skipped my jig up under and caught that 6-6 and she had 4 pounders with her. I left and let it rest and came back later. I skipped the jig up under there and hopped it once and a fish grabbed it and let it go. I swam my jig back in and 20 bass between 3 and 5 pounds followed it back. But I was able to catch a 6-6 and jump up to 19 pounds of bass. I stumbled a little bit that first day only catching 4 fish and that cost me.

I caught my fish this week on a Yozuri MidCrank, a Berkley Hand Poured worm, an undisclosed jig with a Havoc Craw Fatty green pumpkin trailer and a fish head spin. I used all four baits all three days and caught my big limit today on all 4 baits. I bounced around between deep and shallow all three days. I wished this was an Elite Series event and we had one more day because I’ve figured them out better every day.

I caught one of the biggest bass of the tournament in a dock in 2 feet of water today. I never went shallow the first day. I’d love to ask Casey Ashley why there are 30 bass under one dock that weigh more than 3 pounds.

I fished deep all week. I was fishing a road bed out in 40 feet of water. My two primary baits were a football jig and a drop shot with a Yamamoto Shad Shaped worm. I hated fishing deep before this tournament. But now I’m starting to like it a little bit.

I caught all my fish this week fishing a shaky head with a prototype Big Bite Baits shaky worm and a Cane Stick, jig with a watermelon candy trailer and 5” Keitech swimbait. That big fish I caught today came on the swimbait. I was fishing docks down near the dam with deep water and brush around them. I consider deep 40 feet on this lake. I cycled through a lot of the same docks because it seemed to pay off because I caught my biggest fish on a later trip each day to the same dock. I did what I thought I needed to do to win. It was a good solid week but it wasn’t a great fishing week.

I went back to the same places. I knew they were in there after I found them in practice. The first hour was really good in there today. I was on a morning deal. I was fishing pockets and drains and the shallow blueback deal the first couple hours of each morning. I fished two baits this week. I caught all of my fish on a Fish Head Spin with a pearl white V&M Shaky Shad and a Football head 6-Inch V&M Mag Finesse Worm. You had to do your damage in the first couple of hours. The first day they never really got going. But I knew they were in there because I caught 3 in practice and on the third one like 40 fish followed him out.

I was fishing a flat in the back of a pocket that dumped into deep water. I would fish the mud bottoms that were warmer away from all the hard structure. And then I was chasing the herring around in the mornings.

There were 2 lures that caught the bulk of my fish. I was fishing the Rapala Shadow Rap in Mossback Shiner in the drains fishing the blueback morning pattern. I would then go deep and fish deep brush with a Missile Baits Football jig.

I was running 30-50 spots each day. I was fishing the Shadow Rap in some shallow pockets in the mornings chasing herring and feeding bass. Then I moved out to fish manmade brush this week, and I would get my bait down in the brush as a contact point and then hop it in the brush. If I came through there and didn’t get bit, I was off to the next pile.

I caught my deep fish out around 30-35 feet where the bottom was still clear of standing timber. It seemed if you went deeper you got lost in the trees.

I caught the majority of my fish this week on a wacky-rigged 5-inch Yamamoto Senko on a drop shot. The rest came on a 6-inch straight tail Roboworm on a drop shot. My Roboworm was morning dawn and my Senko was an Electric Shad. I had a big one hooked up with 5 minutes to go today. I had 10 minutes to go and I see an arch on my graph in 38 feet of water. So I drop on it. I see it follow my bait down so I just leave the bail open. I click it shut. I pickup and it’s solid. So I set and start winding the fish up. I get it half way up and it comes off. So that really stung. You’re only getting 5-8 bites a day and you let that happen on the last day. It just can’t happen.

The biggest thing that I have taken away from fishing 6 straight days on this lake has been that I did not cover near enough water to give myself an opportunity to win. I spent entirely too much time trying to force fish to bite that in hindsight weren’t going to bite unless the herring were there. On average I would bounce around between 10-12 spots a day. But I think in order to be successful, you need to hit 25-30 spots a day and put your bait in front of as many active fish a day.

I caught my fish on a 3 1/2-inch Big Bite Baits Cane Thumper, Cabela’s Go-To Swim Minnow, a homemade under spin and the Spro McStick. When the fish would start schooling this morning I would straight reel the jerkbait and twitch it intermittently in the retrieve using my reel to retrieve to emulate the gliding action of the herring.

I caught most of my fish on a Berkley Havoc Bottom Hopper worm on a shaky head and on a drop shot below one dock this week. What made the dock so special was the back of the dock was in 18 feet and it came out over a drop to 33 feet with big boulders and rocks all over it. I found it on my side scan in December during pre-practice.

I weighed in every fish I caught off that single patch of docks. In hindsight, I wish I had stayed there longer on the first day until I had my limit.

My primary baits this week were a football jig, Rapala Shadow Rap, Gulp! Minnow and an under spin. My first two days it was primarily a bank-oriented deal for me. Today I decided to fish ditches today because of the low light conditions and the fact the herring were staying up higher in the water. I caught 8 or 9 fish this morning. The herring quit moving and the bite died for several hours and got really tough.