Most record fish have been caught by accident. By that we mean, most folks seek to catch fish, but they were NOT purposely trying to catch the biggest of that species in the state or the world when they go fishing. While some big bass fishermen have broken some big bass records across the country, few were purposely setting out to set a record.

That was until Lyal Held and Casey Ehlert both of Barnesville, Minn. set out to break the South Dakota smallmouth bass record. They have been planning to break the record for more than three years since it was set in 2013. They have been meticulously scanning, mapping, plotting, and studying lakes around their region with Humminbird electronics, LakeMaster mapping and plotting it on software. And then preparing equipment to document their quest to break the smallmouth bass record. But they didn’t actually put their plan into fishing action until Saturday, April 23, 2016.

The were fishing on Horseshoe Lake, near Webster, S.D. They have spent extensive time learning the lake, study moon phases, following water temperatures and focusing on getting the timing right to increase their odds of catching the biggest smallmouth in the state.

Their plan unfolded magically, and Held ended up breaking the South Dakota smallmouth bass record in their first hour of fishing with a bass weighing 7 pounds, 3 ounces, eclipsing the former record of 7 pounds set in 2013.

The fish were setting up in a classic prespawn pattern with big females moving up to feed in the rising water temperatures. The duo netted some nice smallmouths early on Rapala Shadow Raps, then Held picked up a Yumbrella rig with Kalins 3.8-inch Sizmic Shads on them (3 rigged swimbaits and 2 dummy swimbaits) on an Abu Garcia Veritas 2.0 Rod and caught the record breaking smallmouth bass.

“When the fished jumped and I saw it’s girth, I knew right then that this fish had the potential to be a state record,” Lyal said.

He was right; the fish was 19 1/2 inches long with an amazing 19-inch girth. They immediately contacted the DNR, and got a large tub to transport the fish to have it weighed. They got a the tub, aerator, and water from a local baitshop because it’s illegal to transport water from one place to another in South Dakota fisheries. So they transported the bass to a local grocery to have it weighed on a certified scale and a DNR official verified their weight to make it the new state record.

The trip was short, and their primary focus was getting the fish certified and released back to the lake alive.

They documented the entire quest and catch on film as you can see in the short teaser video, but they’re working on the full documentary of their quest and record-breaking catch to be released very soon on their YouTube channel. For now, check out the impressive pictures of the record fish as well as some other tub smallmouths they caught on their quest to break the smallmouth bass record. 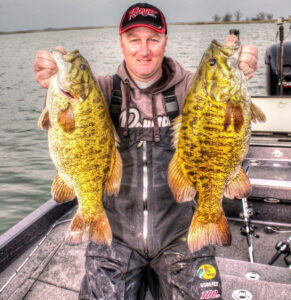