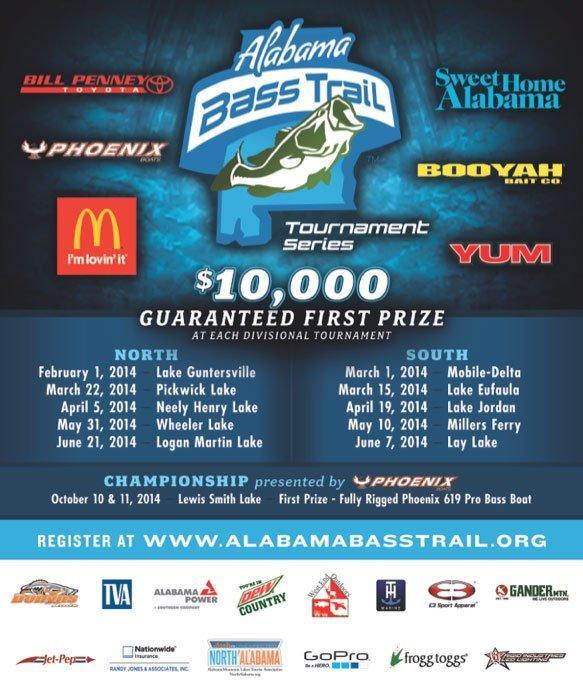 “Alabama is a great state for fishing,” Governor Robert Bentley said. “We have professional tournaments here on a regular basis. The goal of this amateur tournament is simple. We want to encourage more people to fish where the pros fish. The Alabama Bass Trail was established to help us share our lakes and rivers with more people. When more people come to our lakes and rivers that increases tourism. And when tourism increases, that benefits our local and state economies.”

Sanctioned by BASS (Bass Anglers Sportsman Society), the Alabama Bass Trail Tournament Series gets underway Feb. 1, 2014. The tournament trail will feature two divisions: Northern and Southern. Each division is made up of five tournaments on five different lakes. Each tournament will have a $10,000 guaranteed first-place prize and will pay 20 places. Maximum number of boats is 200.

Millers Ferry May 10, 2014 hosted by Wilcox County Chamber and the City of Monroeville

Hosted by Chamber of Commerce of Walker County, the championship tournament is set for October 10-11, 2014 on Lewis Smith Lake.

The championship is a no entry tournament and the first place prize is a fully-rigged 2015 Phoenix 619 Pro with a Mercury 150, trolling motor and electronics valued at $37,495 with an additional $40,000 in cash and prizes. Phoenix Bass boats will also offer the tier one First Flight incentive plan to tournament winners in a qualifying Phoenix boat.

A few select tournaments including the February 1 launch tournament will be filmed and aired at a later broadcast on Anglers Channel reaching a viewership of over 10 million households.

“We are all grateful for Governor Bentley’s vision and will work together to make the Tournament Series a success,” said Lee Sentell, director of the Alabama Tourism Department. Just two years ago, Sentell, Governor Bentley, and the staff of the Alabama Mountain Lakes Tourist Association began laying the groundwork for the Alabama Bass Trail. After its launch in the spring of 2012, its popularity quickly grew and Donaldson look for another opportunity to reach out to anglers.

Registration will be available online beginning at noon on September 30th at www.alabamabasstrail.org. Entry fee per tournament is $250 per team or from September 30-October 30 2013, teams can register for all five tournaments for $1150.

According to Donaldson, each tournament is expected to pump an estimated $500,000 into the local economy of the host city. “Anglers typically pre-fish, or scout a location, three or four days prior to a tournament, and during this time, they patronize restaurants, gas stations, and tackle shops. During a tournament, approximately $300 is spent each day on accommodations, gasoline, food and other supplies,” stated Donaldson.

For more information, call Donaldson at 855.934.7425 or visit www.alabamabasstrail.org.