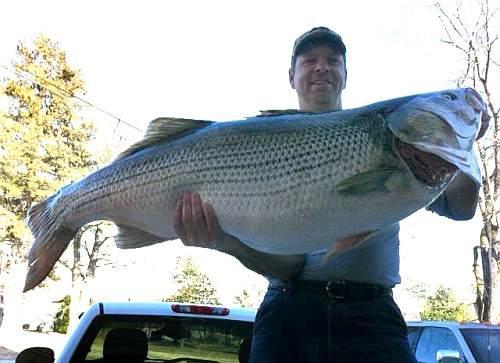 Several reports have surfaced in Arkansas about a record striped bass that was not granted record status because the anglers, according to the AGFC did not follow proper protocol to have the fish weight recorded and verified sufficiently. KATV has reported and done a lot of background checking on the fish, the events that unfolded, the Arkansas Game and Fish Commissions denial and several other instances of state records in Arkansas that were likely true record fish but measured in ways that contradict their denial of this record.

Rodney Ply of Diamond City, Ark. was fishing on Bull Shoals with a homemade umbrella rig he calls the Bass Tricker. He got a violent strike and landed a huge striper. He weighed it at the local boat dock at 68 pounds which would make it not only the Arkansas state record but also the World Record according to the IGFA records.

The plot thickened when AGFC officials were called to come to the dock but then ordered the anglers to meet them in a nearby town to weigh on a grocery scale which was not adequate to weigh such a large specimen. They looked at several different places in the town for suitable scales. The fish puked up pounds of shad and other forage during the ordeal. By the time the found a scale that the AGFC said would work the fish weighed 58 pounds. Even though it was weighed on a flat scale and not a hanging scale as it originally was and should be for a fish of this size.
What’s even better is Ply is the first angler who was smart enough to sign up for the Mustad Hook a Million promotion who has caught a potential state record or world record qualifying fish. Ply has already lost the $100,000 state record prize after the AGFC denied his state-record claim. Now he’s hoping the IGFA will believe the several witnesses that saw the catch, the weight and the events that unfolded on that memorable day. If the IGFA does certify the catch as a world record, Ply stands to pocket $1 million.
The IGFA is set to rule next week on the fish. We’ll keep you updated. Check out KATV.com for lots of good details on the catch, the interaction with the AGFC, the fish, the IGFA and more.
PreviousNext
Contact Us