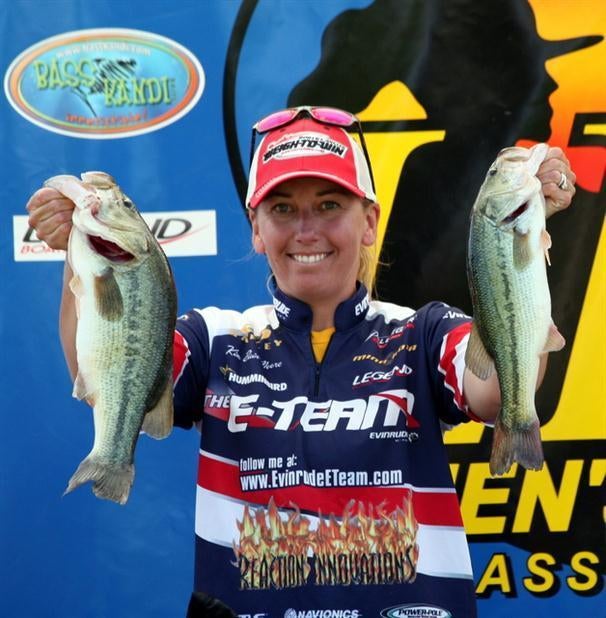 Alabama’s Kim Bain-Moore pulled a hard-earned, five-bass limit weighing 11.48 today from the waters of Arkansas’ Lake Dardanelle.   Combined with her day-one catch of 10.04, that gave her 21.52 pounds of bass earning her the Lady Bass Anglers Association (LBAA) 2012 Lake Dardanelle Title.

This was no easy victory for Aussie transplant Bain-Moore, not by any stretch of the imagination.

â€œIt is important to me to try and get a couple of fish in the livewell early to get some confidence,â€ she added, â€œand then run and try to get some big fish in the grass. However, the fish in the grass didn’t bite â€“ at least for me.   So, I had to rely on my deep spots, and I only had three of them. I’m thankful on two of the three, I was successful.â€

Even a veteran angler like Bain-Moore can get down and out during a tournament.

â€œIt is tough when it’s really hot out there and it’s a long time between bites and I was starting to get a little discouraged.   Even more discouraging, I saw some big fish being caught behind me,” Bain-Moore said.

â€œShe said â€“ stick with it, it’s good it’s good, you can do it, and her encouragement really helped me to rally like I needed.   At that point, I still had two and a half hours left and in about thirty minutes I caught one, and I immediately thought I only need two more â€“ that’s a fish an hour.   That’s totally achievable,â€ she stated.

This is Bain-Moore’s third win in two years on the LBAA tour.

â€œI think to be consistent on a tour of this caliber the key is being versatile.   I don’t know that there is one thing that I’m known for fishing as I am more of a jack of all trades type of angler.   What they are biting â€“ I just do it.   Another thing, like in this tournament, is to have different options.   I wanted something shallow and something deep so that if one is not working out I can to the other one.   Finally, do not be afraid to do something totally different than you are used to doing,â€ Bain-Moore concluded.

Vicki Henderson captured her first ever co-angler championship on Lake Dardanelle with two consistent days of fishing.   Henderson of Ashdown, Arkansas caught 12.01-pounds of bass over the two days as she outdistanced second place Brandi Frasier by nearly three pounds.

â€œYou know I had a good feeling before this tournament.   I told some friends prior to Dardanelle that I really felt good about this tournament,â€ a smiling Henderson stated.

â€œI caught some shallow and some deep,â€ an excited Henderson continued.   â€œIt was tough â€“ today I caught a couple of fish early and then I struggled as I don’t do well in deeper water.   Today I knew I had to do well quickly.â€

What is the key to winning from the back of the boat and having to adapt to a different pro angler and their respective styles each day?   â€œYou have to adapt with their speed, that is a big key,â€ Henderson added.   â€œSome fish at a very fast pace and others will take and area and go very slow through it.   So you have to be versatile and you must have a variety of baits with you.â€

The third regular season stop on the LBAA’s 2012 tour is Kentucky Lake South as the Larry Shaffer Memorial Tournament will be July 12-14 out of Paris Landing, Tennessee.   The tour then shifts to Alabama’s Lake Neely Henry September 6-8 and will finish up with the 2012 Lady Bass Classic at Alabama’s Lake Guntersville October 11-13.