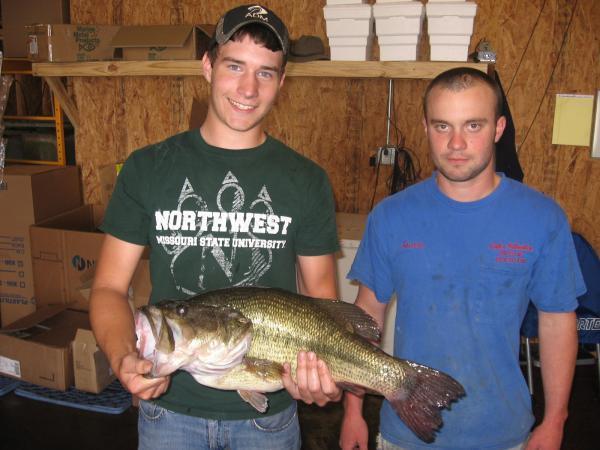 Dylan Gilmore of Perry. Gilmore and his friend, Austin Lake, had set their trotline on April 27 using goldfish as bait, hoping to catch some catfish at Ka-Tonka Lake, located in Ka-Tonka Game Preserve and Sporting Clays Club in Ralls County. When they returned the next day to check their line, Gilmore realized they had caught something. When pulling the line to their boat, what he assumed was a catfish instead turned into something a little more. “We knew something was on there,” Gilmore said. “I reached down and grabbed the fish and thought ‘oh my gosh, this thing is huge.’ It felt like a dream at first. I have never seen a bass that big in person.”

Gilmore was not quite sure what to do with the large fish, so he put it in a cooler with aerated water and headed to the Hobby Hut, a bait and tackle store, on Highway 19 in Perry.

“I shop at the Hobby Hut and figured they would know what to do with such a large fish,” Gilmore said. While at the store, Gilmore had the fish weighed. The scale read 9 pounds, 8 ounces. “Once I knew how much it weighed, I looked up the record online,” Gilmore said. “I found the web page on the Missouri Department of Conservation’s (MDC) website. At first, I didn’t think I had broken the record, but that’s when I saw the line for alternative methods.”

The owner of the store allowed Gilmore to keep his fish in a tank until he could contact MDC. On May 1, Gilmore phoned Fisheries Management Biologist Ross Dames and told him about his fish. Dames met

Gilmore at the Hobby Hut to get an official weight on the stores’ certified scale. At that point, Gilmore’s fish weighed in at 9 pounds, 2 ounces and was 23.5 inches long; big enough to nab him a new state largemouth bass record for alternative methods.

“When I saw I officially had the record, I was pretty excited,”
Gilmore said. “But it also made me think I should have called the Conservation Department sooner!

Gilmore was not sure what to do with his trophy fish. The owner of the Ka-Tonka club told Gilmore he could always release the fish and let it get bigger. Gilmore thought that was a good idea.

“I took a picture of me holding the fish and really, that satisfied me. So I turned it loose,” Gilmore said. “It made me happy to release it and it made the owner of Ka-Tonka Lake happy too. I hope someday to meet it again, and it will be even bigger. Then, maybe I’ll get a new record.”

It is still sinking in for Gilmore that he is now a record holder in Missouri. “It’s pretty exciting, something I know I can always have and be able to tell my son or grandson about,” Gilmore said. “I don’t know how long I will keep the record, but that doesn’t really matter. No matter what, I have the certificate that shows I held the record at one time, something I can always look back on.”

More information about Missouri fishing records is available at mdc.mo.gov/fishing/reports/records