Shortcuts are for the weak. The reward lies in the work not the result. I’ve long prided myself as a guy who will outwork folks. There will always be someone smarter, more athletic, better looking. The only thing I can control is how hard I work.

So when it comes to fishing, I have a very low tolerance for folks who fish tournaments but don’t want to put in the work it takes to find winning schools or areas holding winning fish. It’s one of the things that has left a bad taste in my mouth with tournament fishing. Way more information gathering and spot helping than actually practicing and dedication to fishing.

So I was refreshed when I got to catch up with Ben Dziwulski of NC State. He and his partner Ethan Cox recently won the Pickwick Lake BoatUS Collegiate Bass Fishing Championship in an impressive fashion catching limits of 20.33 and 25.67, the largest of the tournament for a combined weight of 46 pounds of Pickwick bass. Those also happened to be the first 20-pound limits Dziwulski had ever weighed in a college event.

Winning the tournament was not the refreshing part. The refreshing part was they did it with no information and a lot of hard work on and off the water. As Dziwulski recounted the entire week, it was apparent that what they did to win meant more to him than the win itself.

“We didn’t even find out we were able to fish until 7 days before the tournament started,” he said. “We were on the waiting list and finally got the call to come fish. Problem was it was inside of the off limits, no-information period so we were left to figure out a lake we’d never fished before online and with a few days of practice.”

Taking a “college student” approach to their fishing, Dziwulski and Cox started studying online. They studied not only maps of the lake but past tournaments on the lake. They studied tournaments from all the Tennessee River Lakes. They studied videos on YouTube on topics down to KVD cranking ledges on Kentucky Lake and talking about why he switches from a rattling Strike King 6XD to a silent 6XD. They basically were teaching themselves to ledge fish on the Tennessee River on the internet.

It sounded crazy to think it could be done, but the story got better from there.

When they got to the lake, they had talked a bunch before hand and really felt like they had the right mindset and game plan to have a chance.

“Getting our butt kicked in the Pepsi Open on Kentucky Lake last year really lit a fire for figuring out these ledges on Pickwick,” Dziwulski said. “I don’t think I caught a keeper bass last year. It was a sickening feeling leaving that tournament with my tail between my legs. But I think losing that tournament prepared us to win this one.”

What Cox and Dziwulski decided and agreed upon was that they were not going to stop scanning the ledges with their Lowrance HDS units until they were sure they were seeing a big school of bass. That meant they were going to spend a lot more time in the driver’s seat than on the front deck casting — a discipline lost by many anglers today.

The Monday of practice, they scanned for nearly 12 hours and managed to find only four schools of bass. One of the schools proved promising when on a single cast, they caught a 5 pounder and a 3 pounder. The other three schools had big numbers of bass but not nearly the size as the one cast they made on the other school.

By the time practice was over they had found several schools of bass but still kept thinking about that single cast.

They started scanning out deep on the ledges and after several hours of that without really finding any good schools, they decided to find something on their Navionics chips that led back to the spawning areas. What they found was a ditch or in this case a ditch that split in two with a high spot in the middle that intersected a large spawning flat going into a bay. They were a good distance from the main river and fishing much shallower than they had scanned.

But when they scanned over these two ditches, they found the motherlode of bass waiting for them.

The first day of the tournament they had a variety of crankbaits on the deck. Dziwulski was throwing a Strike King 5XD and Cox was throwing a Bomber Fat Free Shad, just trying to give the bass a lot of different looks. In almost no time they had a conservative 18 pounds in the livewell and made the decision to sit on their spot and not fish it anymore.

“That’s one of the hardest things I’ve ever done in my fishing career,” Dziwulski said. “We got out little bity shaky heads and moved off the primary spot but stayed close. At one point 4 and 5 pounders were coming out of the water killing shad and we were hoping no one would try to come in on them and beat up what we had found so we stayed and sort of hovered around it. It was nerve racking not to throw more at those fish, but we didn’t know if the school would hold up for two days of heavy fishing.”

They went to weigh in on day one and their conservative estimate actually weighed nearly 20 pounds.   They weren’t in first but they were well within striking range.

The next morning they got on their honey hole and started going to work. Dziwulski recalled that KVD video he watched on YouTube and decided to pull out the silent 6XD. They immediately went to hammering better quality bass in the 5 and 6 pound range. They would sit in the bigger ditch, cast across the high spot into the smaller ditch and then just grind the crankbaits over the high spot and when they deflected off one of the stumps on it, and paused the bait, the bass just killed the plugs.

They were making long casts with JB Custom Rods Missile and Missile Light rods and a Abu Garcia Revo S reel with Revo Winch gears installed in it and 12-pound Hi-Seas Fluorocarbon.

“That day will last a long time in my fishing memories,” Dziwulski said. “I wish now we had thrown more the first day because they were actually biting better that first day, and we might could have landed 30 pounds with what we saw busting that day. But it all worked out for the best I guess. God really blessed us that day.”

They went to the day two weigh-in and posted the biggest limit of the tournament, big bass for the day and earned the trophies and title of BoatUS Collegiate Bass Champions. 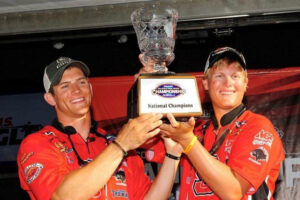 Ben and I talked at length about the information gathering that has become common place in college fishing and he said something that renewed my faith that there are still some anglers wanting to learn to fish the right way.

“Man we were in the no information period,” Dziwulski said. “It wouldn’t matter if I could get away with getting waypoints or not. It would weigh too heavily on my heart to do that. I try to do everything the right way because I don’t want to live my life the other way.”

As an aside, I had already heard some things that have been going on, even in this tournament with teams asking guides for waypoints the night before tournaments, teams calling other teams during events and telling them to come get fish out of their livewells and more. That’s not where this sport needs to go and winning college fishing events without any morals or work ethic should not be the focus of growing the sport of fishing.

So hearing stories like this gives us some hope that there are good ones in every generation who will focus more on becoming better at their craft than chasing trophies.

“Ethan and I would really like to thank Ethan’s dad, Darrell Cox for travelling with us and his support,” said Dziwulski. “It has been such a relief to have him there. He does everything from clean out the boat after practice and tournament days to making us lunches, charging the batteries, filling the boat up with oil, putting the cover on and taking it off before we leave each morning. When you have someone like that after you’ve exhausted yourself for days searching for bass, it just keeps you focused on the task at hand and not all the little problems that can get in the way. So we really wanted to recognize what a contribution he made to our championship.”

Our hats off to Ethan’s and Ben’s fathers for raising their sons the right way. We need a lot more young men like this coming out of college whether it be to pursue careers in fishing or the White House.