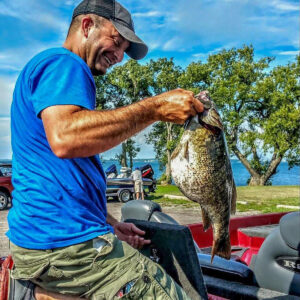 During spring and fall it can be some of the absolute best smallmouth bass fishing in the country. These seasons offer everything an angler could dream of—excellent weather, scenic views, nice people and of course, lots of big smallmouth bass. 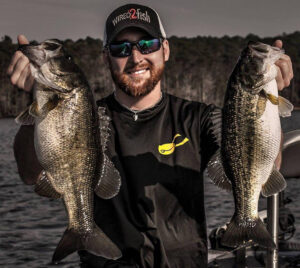 Lake Seminole is a beautiful and tranquil fishery located in the middle of nowhere near the Georgia/Florida state line. Whether you’re sneaking around its quiet backwater ponds in search of giant spawners or ripping a 1/2-ounce or 3/4-ounce lipless crankbait through flooded vegetation, you have a legitimate chance of catching a trophy-class largemouth. No matter how you like to fish, you’ll fish yourself in close quarters with plenty of 3 to 5-pound bass. 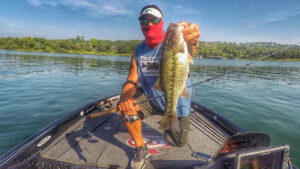 This lake made our list for the sheer numbers of bass you can catch here. There are very few places you can catch quality largemouth, smallmouth and spotted bass in the same fishery. It’s a very deep and clear lake, so it’s a great place to learn drop shots, topwater techniques and various swimbait applications. The winter is an excellent time of year to fish Table Rock as local tournaments often take 25 pounds to win. You may not catch any giants, but there’s a ridiculous number of 2-pound fish in this lake. 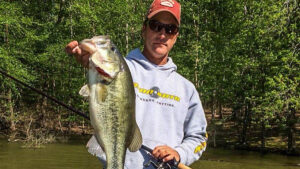 Kentucky Lake fished really well this year during the spring and early summer, but then it tapered off significantly because of the lack of current and the growing asian carp population. The carp problem has changed the bass’ feeding behavior, as it noticeably affects where the bass position and how long they stay in particular areas. It seems as if the bass are feeding a lot more after dark as a result. Barkley Lake was really good this year, especially for shallow anglers flipping wood and fishing shallow bars. 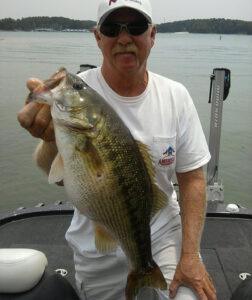 Whether you’re fishing topwaters in the summer months, jerkbaits in the spring or underspins in the winter, there’s a little something for everyone at Lake Lanier. It’s one of the premier spotted bass fisheries east of the Mississippi and this particular strain of spots pulls like a train. It’s close to Atlanta and can get absolutely swamped with recreational boat traffic, so unless you’re feeling brave, you may want to focus on the weekday fishing. 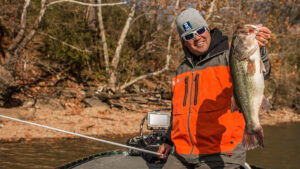 The shallow grass of Pickwick Lake has really taken off which has steadily improved the fishing over the last few years. It’s a great fishery for both shallow and deep anglers, although the offshore fishing hasn’t been as strong lately. Its notorious for fishing small, so be prepared to fish in a crowd if you’re out there during the summer ledge bite. 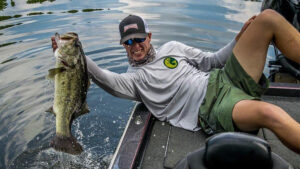 Despite monstrous catches over the years, this lake continues to be overlooked by anglers throughout the country. You’ll find plenty of 5 to 7-pound bass on Santee Cooper, but down be surprised if its clear waters requires you to downsize your gear to catch ‘em. Squarebill crankbaits are a big producer here as well as floating worms and stick worms—fished on 8-pound line, of course. 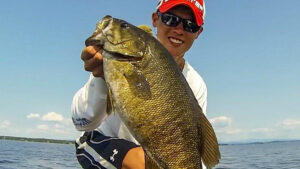 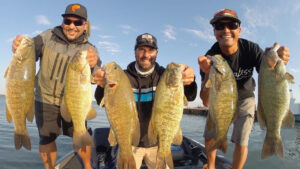 Sturgeon Bay has it all when it comes to smallmouth bass; anglers have the opportunity to catch both quantity and quality. 8-pound smallmouth aren’t unheard of in these waters and 25-pound limits are old news here. You’ll have to battle some big water, but it’s definitely one of the best smallmouth fisheries in the world. 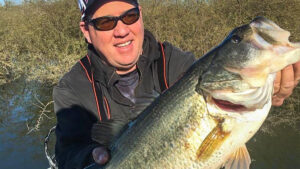 This fishery continues to climb on our list each year because it’s on a major rebound. Although it’s still not fishing like it was back in the hayday, the numbers are coming back strong and anglers are reporting a lot more 4 and 5-pound catches in recent years. Any cast can result in a 10-pounder and there are multiple ways to catch them. Flipping, pitching, deep crankbaits and Carolina rigs continuously produce and anglers can take their pick between fishing shallow or deep. 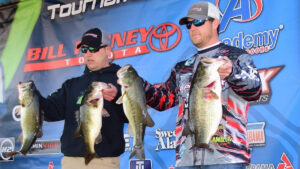 Ranked No. 1 in our 2015 Top 20 Largemouth Bass Lakes, “The Big G” has seen some decline as of late. Despite the fall in our rankings, it continues to produce quality fish, especially during the summer ledge season and fall grass bite. There seems to be a better quality of fish that lives in Guntersville compared to the rest of the TVA, but there haven’t been as many giants caught from its waters this year. Anglers will still have some chances to catch a 6 or 7-pound largemouth on each visit, however. 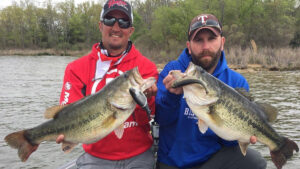 Despite the constant fishing pressure stemming from its famed reputation, Lake Fork continues to produce big fish. It’s an intensely managed fishery and a consistent producer for the Share Lunker program. Its tendency to kick out big bass each year is a true testament to the effectiveness of world-class fisheries management. 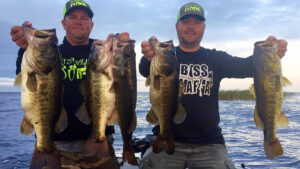 It’s a huge, shallow bowl that receives loads of fishing pressure, but again, Okeechobee shows no signs of slowing down. It’s a grass fisherman’s dream that produces giant bass all year long, especially in January. If you’re tired of the cold weather this winter, head down to Clewiston, Florida and pack your flip flops and flipping sticks—it’s a near-perfect remedy to cabin fever. 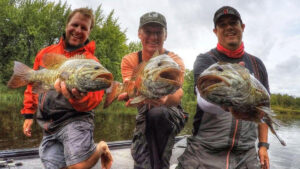 This section of the Mississippi River is completely different than what southern anglers are accustomed to. It’s much more narrow with drastic turns and log jams galore. The water is much clearer, so it offers awesome smallmouth fishing on the Minnesota side and excellent largemouth fishing on the Wisconsin side. You can catch ‘em just about any way you’d like, but the topwater bite can be unforgettable at times. Anglers probably won’t run across any record-class fish, but a 3-pound average is common and they’re very easy to catch. 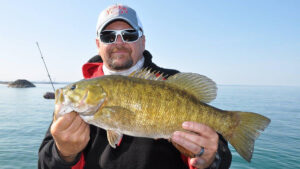 An absolutely massive fishery, Lake Erie fishes like a couple of different lakes depending on your launch location. It regularly takes weights all smallmouth in the mid 20s to win tournaments and a 5-pound average is surprisingly common on this lake. Some interesting trivia: Lake Erie boasts the thirteenth-largest surface area of any lake in the world. 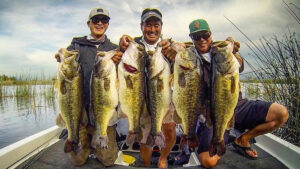 With its sprawling canals, it’s a lot of water to cover. But the “Dirty D” as locals call it is a flipper and frogger’s paradise. It’s an extremely fertile fishery with lots of forage, which is a large reason why 10-pounders are so common in its waters. If you plan on entering a tournament, make sure you wear your big boy pants because it’s not uncommon for 30-pound limits to be brought to the scales. 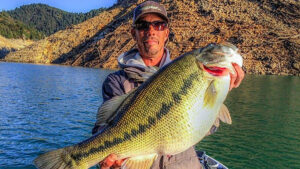 It was once a closely kept secret, but thanks to an astonishing number of world record-class fish caught from its waters, it’s safe to say that the secret is out. It’s commonly referred to as the top spotted bass fishery in the world and the numbers back it up: Tim Little caught broke the world record spotted bass title with a 10.38 monster. Not long after Little’s catch, Paul Bailey reportedly broke that record with an 11-pound, 4-ounce spotted bass—but the fish was weighed in a boat and not on solid ground, so it wasn’t certified. If enormous spotted bass sound like a good time to you, New Bullards Bar is the place to go. 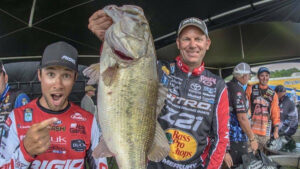 This lake has seen two years of high water conditions resulting in excellent spawns, which tells us Toledo Bend will be hanging out at the top of our list for years to come. Whether you’re flipping or casting a big plug, you have a definite chance of catching that bass of a life time. It’s another lake that sees a bunch of fishing pressure but it shows no signs of slowing down. It regularly takes 30 pounds to win tournaments with 10-pound kickers, especially in the spring months. 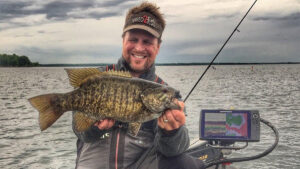 Although it’s been the center of controversy with its walleye stocks allegedly being depleted and smallmouth harvesting regulations, Mille Lacs is still kicking out gargantuan smallmouth on a routine basis. It’s easily the best smallmouth fishery in the country right now and anglers have a great chance of catching a 6 or 7-pound smallmouth on any fishing trip. If the giants don’t bite, you’ll have your hands full with plenty of 3 and 4-pounders.

The Elite Series anglers showed exactly what makes this lake such a powerhouse in September of 2016. Seth Feider won the 2016 Toyota Bassmaster Angler of the Year Championship on Mille Lacs with 76 pounds, 5 ounces of smallmouth for just a three-day tournament. A 20-pound per day average landed Brett Hite in 24th place; let that sink in for a while.

Mille Lacs is bound to become a major destination for hardcore smallmouth anglers, especially after the Elite Series smallmouth beatdown airs on television. 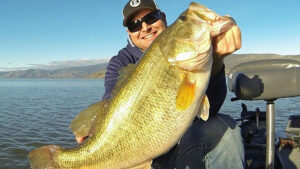 Clear Lake is the best big bass fishery in the country right now—it was a unanimous decision for our editorial team. The sheer numbers of largemouth weighing over 5 pounds is simply jaw dropping and anglers routinely catch 10-pounders from its waters. It sees a lot of angling pressure but like many great lakes on this year’s list, it still produces. It has docks, grass flats and rocky structure, so there’s a little of everything for most anglers. You can catch giant bass on several different techniques and you’d be shocked at the number of 5 to 8-pounders you’ll run across. This lake needs to be No. 1 on your 2016 bucket list, without a doubt.

Check out our 2015 rankings below: