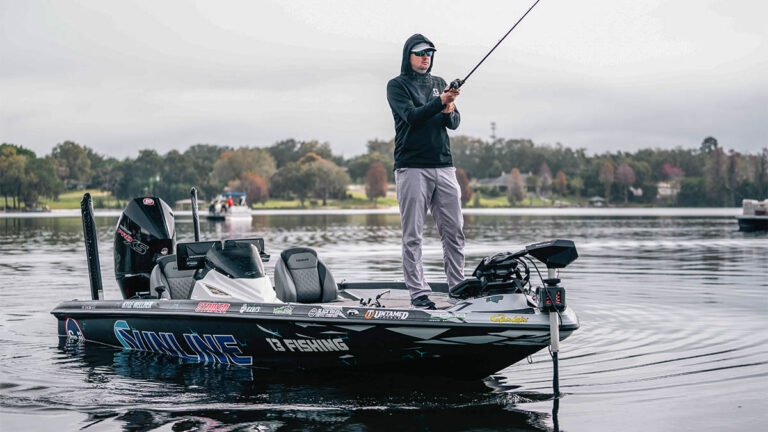 Kyle Welcher is the latest angler to join the ranks of the 13 Fishing Team. He will compete on the Bassmaster Elite Series exclusively with 13 Fishing rods, reels and soft baits.

Welcher’s road to the Elite Series has been anything but conventional. Before tournament fishing full time he made a living playing poker and credits a lot of his success to the parallels between the two.

“Trying to be a professional fisherman kind of goes against the grain of society — it’s not the safest route to a successful life,” Welcher says. “It’s the same way in poker, because 95% of the people that play are going to lose money.”

For Welcher success at both the poker table and on the water are all about a strategic mindset, time management and a sustainable pattern.

“It is exactly the same as a poker game,” he says. “The number one thing I’ve always wanted is consistency. You want something consistent and sustainable if you’re going to try to make a career out of it. Yeah, I’m going to try to swing and catch them as good as I can, but you have to be there on the final day. That’s the goal — get to the last day by any means necessary,” says Welcher.

“Kyle’s mindset when it comes to both competition and his tackle are the perfect embodiment of the Make Your Own Luck ethos,” says Ben Alcocer, Marketing Director of 13 Fishing. “He is an extremely detail oriented when it comes to his gear and does not leave anything up to chance on tournament day.”

Welcher has been digging in with the 13 Fishing product team on the next generation of gear right from the start.

“He isn’t your standard pro-staffer. He has elite level tournament knowledge of tackle and understands the small details that make products great. His addition to the 13 Fishing team has already had a great impact that will show in our upcoming product line,” says Matt Baldwin, 13 Fishing’s Head of Reel Design.

Kyle also brings a lot of experience when it comes to rod development. “I’ve been building my own rods for years,” says Welcher. “What most people don’t understand is that it’s not about taking an existing blank and mixing and matching the componentry. What we’re doing here is starting from the ground up by designing the blanks which makes for a better product.”

“He gets it,” says Ricky Teschendorf, 13’s Head of Rod Design. “From the moment he started giving feedback it was off to the races and the rods have gotten legitimately better. He’s really good at focusing on balance and the big picture.”