There are so many options now when selecting a jerkbait. Different brands, sizes, weights, colors, bills and the list goes on. So for an angler unfamiliar with the technique, it can be a little daunting. We decided to sit down with professional angler and jerkbait expert Chris Zaldain to get his take on one of the main differentiating characteristics. When do you want your jerkbait to suspend, float or sink?

In certain situations, Zaldain wants his jerkbait to float. But he says he never fishes a sinking jerkbait.

“If I want the bait to get deeper, I’ll go with a Vision 110+1 or a Vision 110+2, which just means plus one meter or plus two meters, so roughly three or six feet. A spybait is a hard bait that sinks that kind of replaces a sinking jerkbait for me now. You can count it down and there’s more control with a spybait. A sinking jerkbait for me now is one that’s essentially broken and has water in it.”

When to rely on a suspending jerkbait

Zaldain primarily sticks with a suspending jerkbait all year, in all water temps, for all species of bass because it does the one thing you want a jerkbait to do the best- mimic a dying baitfish.

“A lot of times when you look at a dying baitfish in a tank or an aquarium, they just sit still in the water column. That’s why an original suspending Megabass Ito Vision 110 works so well. It just sits there.”

However, that suspending characteristic is largely dependent on one other aspect of your gear: your line. A line that sinks too fast will pull the jerkbait down. A line that floats or sinks too slow will effect the suspension of the bait as well. Zaldain has tinkered with several brands, types of line and pound tests over the years and found one line that does the job perfectly.

“The best line size to get an original 110 jerkbait to suspend freely is 12-pound test Seaguar InvizX. Not 15, not 10, but 12-pound. Right out of the package the 110 will suspend great throughout all the temperatures with that 12-pound Seaguar.”

Although Zaldain will throw a jerkbait year round, he says that the prespawn and post-spawn windows are when it really shines. But what about that other 15 to 20 percent of the time when Zaldain isn’t throwing a suspending jerkbait?

When to rely on a floating jerkbait 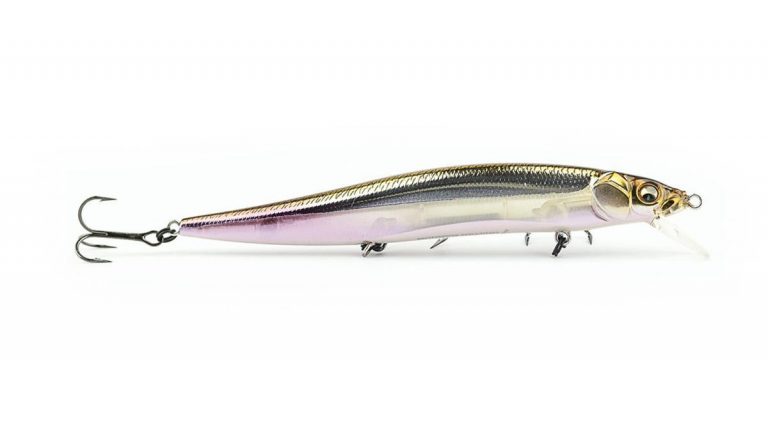 “For the floating-style jerkbait, I’ll go with a Vision 110 Magnum and there are a couple of modifications I’ll do to get the bait to float even faster when I want it to.”

For starters, Zaldain will go with a lighter wire hook, which naturally takes a little weight off the bait. But when he really wants to bait to pop back up between jerks, he’ll go with a large diameter monofilament line.

“I like to go with the big, heavy, nasty 20-pound monofilament which floats like crazy. Same rod and same reel. I simply change from that 12-pound fluorocarbon that sinks to that real big diameter monofilament.”

This is a technique that Zaldain primarily uses when fishing around isolated hard cover like docks, rocks and wood and around dense cover like flats with vegetation.

“I strictly do that in four feet or less. I use that floating characteristic of the monofilament as a measure of control. So I go ahead and jerk that jerkbait into that piece of cover and then let the bait float over it.

“Say it’s a lay down log; I’ll jerk, jerk, jerk into it but just before it hits the log and snags, I’ll let the bait float over like you would a balsa crankbait or a squarebill and continue to jerk it around. That heavy mono helps me manipulate the cast and maneuver around cover. Whereas a suspending jerkbait doesn’t do that. If you jerk a suspending jerkbait into a rock pile, it’s just going to sit there.”

Zaldain mainly wants his jerkbait to float when fishing around the spawn and post spawn, and then also in the fall when the shad push to the backs of creeks.

“If I cast over a shallow flat with grass, I’ll use that floating characteristic to work the bait up high and tight to the surface and then when I see the bait get to a hole in the vegetation, I’ll give it a couple of violent strikes down into the hole, knowing that it will pop right back up out of that depression in the grass.” 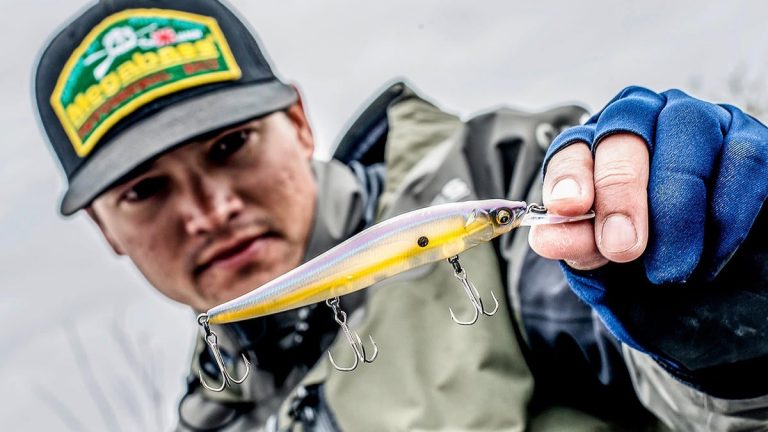 “I like foil finishes, something real flashy. Ozark Shad is my favorite which is just black back with chrome sides. Or gold. Just anything flashy. And that’s because anytime I’m fishing shallow like that I’m typically fishing in more stained water. Every time I jerk the bait I want it to be sending a big, giant ray of light through the water column.”

With all his jerkbaits, Zaldain goes with the same rod and reel combo. The rod is a 6-foot, 11-inch Megabass Destroyer Oneten Special. An obvious choice since it was literally made for the 110 jerkbait, but his reel selection is a little unique.

“I like a reel that I can palm for fishing jerkbaits. So I like for it to have a full side to it. I use an older Shimano Core in 6.3:1. It has kind of a higher profile. It just has a nice grip to it which helps with fatigue.”

So if you’re like me and you’ve ever found yourself standing in a tackle store staring blankly at a $10,000 wall of jerkbaits, now you’ll have a few bread crumbs to follow from one of the greatest breadwinners with a jerkbait to have ever slung it around. Nine times out of 10 or thereabouts, stick with a suspending jerkbait in a more natural color. When the cover and water clarity dictate it, go with a floating-style jerkbait in a flashy finish. Simple enough. Now time to go catch a bass.