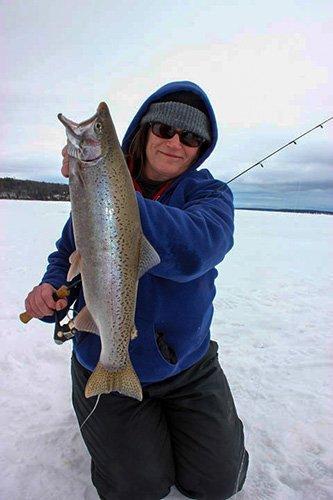 Steelhead staging outside Great Lakes river mouths create some of the most intense sporting opportunities of the winter season. The average specimen is 8 pounds of sleek, well-conditioned muscle.

They come from the vast expanses of the Great Lakes, following temperature clines, currents, and finally mud lines to the mouths of the rivers that gave them birth. Steelhead stage there, milling nervously in and out of river mouths all winter long, waiting for a change in water levels and temperatures to signal the race upriver to spawning riffles.

Steelhead swim shallow under the cover of ice in harbors and bays, often into water 4 feet deep or less. Large schools of the big, lake-run ‘bows make periodic visits to those shallow flats several times each day, and savvy anglers are there, waiting, with traps set.

Anglers arrive early, before sunup, to drill holes on those shallow flats as close to the river mouth as safety allows. Small rivers and creeks that draw steelhead often have very shallow sand flats surrounding the mouth area. The key there is to find grooves and trenches formed by wave action in the 4- to 7-foot range. Around larger river mouths, steelhead often suspend over deeper water, sometimes in depths of 20 feet or more. In that case, one spot might be as good as any other for drilling holes, as rainbows cruise endlessly through these areas.

Systems for catching steelhead are quite simple. Limber ice rods 3- to 4- feet long or light-action jigging sticks in the 5- to 6-foot range are equally effective. The real trick is anchoring the rod in a proper holder so it can’t be ripped down the hole. Rod holders that attach to portable shelters or weighted buckets work fine, and some anglers build a small rod-holder base that sits flat on the ice. The drag on the reel should be smooth and set relatively light so that a fish capable of 35mph runs don’t take the rod with them. Solid drag systems and tough lines are a must.

When the water is stained or cloudy, fill the spool with a tough, limp, soft-green 6- to 8-lb mono or copolymer line like Silver Thread. In clear water, spool up with 6- to 8-lb Silver Thread Fluorocarbon, or use a swivel to attach a 3-foot fluorocarbon leader.

A float is added as a strike indicator. Many styles of float apply depending on the conditions, but the best floats for use outside a shelter are tall so they can be seen inside the hole from 15 feet away or more. The Thill Smooth Stream Float is a stick float that can be rigged as a slip float or a fixed float. In deep water, slide a bobber stop onto the line first and use it as a slip float that connects at the bottom so it won’t freeze to the line above the surface.

In shallow water, use the silicone sleeves that come with the float. Slide them onto the line, then slip the Smooth Stream Float into them using one sleeve at each end.

In a shelter, the Thill Pro Series works perfectly. For better sensitivity with light biters, or for sitting outside near the hole, opt for a Thill Gold Medal Supreme Super Shy Bite. Outside a shelter and in shallow water, Thill Shy Bite and Super Shy Bite Floats rigged as fixed floats are best. The long, slim shapes offer very little resistance. Use enough split shot bulked at least 3 feet above the bait to stand the float. The float should be weighted and balanced perfectly, so the addition of one more 1/128-ounce split shot sinks it. That way, steelhead can’t feel the full weight of the rig until it’s too late, allowing more time to reach the rod.

Baits can be small spawn bags tied with salmon, trout, or steelhead eggs, but often wax worms or maggots work equally well. Any of these baits can be presented on a size #10 to size #6 baitholder-style hook or with a jig, depending on conditions and the mood of the fish. One of the most effective jigs ever designed for presenting wax worms and maggots to steelhead is the 1/64-ounce Lindy Little Nipper, a feather jig that adds color and profile. The feathers move easily, accentuating the movements of live bait, and the stout hook won’t straighten on a big rainbow.

Another effective method involves pegging a 6mm or 8mm Lindy Bead to the line with a toothpick or strand of silicone about 2 inches above a bare hook. Orange, red, pink, glow, and metallic beads look like single salmon or trout eggs, or so we assume. Whatever they think it is, when milling steelhead see a hovering bead, they consistently slide over to inhale it. Tandem rigs can be deployed, using a blood knot to create a dropper line, so two beads can be presented at once. The great thing about beads is the confidence in knowing the “bait” always looks good. No need to reel up and check it, potentially spooking a big, skittish rainbow circling nearby.

In shallow water, jigs or hooks can be suspended anywhere from 6 inches to a foot off bottom. In deeper water, use the “halfway rule” on some rigs, placing the bait midway between the ice and bottom, and put other baits about a foot off bottom. In most areas of the Great Lakes, each angler can set 2 or 3 lines and we suggest using as many as the law allows to cover all the potential “fly ways.”

Once the “traps” are set, sit quietly and wait, or stand 15 to 20 feet away from the rods if you can’t sit still.  Rods should have solid backbones but slow, limber tips that give to the fish and protect light line because staging steelhead can be extremely line shy. Nothing tests knots and line like a 12-pound steelhead blasting around like a panicked canary under the ice. Tie your shoes on tight, hang on, and enjoy one of the toughest battles found anywhere in fresh water.