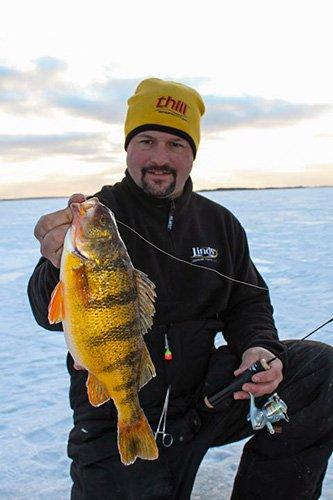 Looking at the genuine jumbo perch in my hand, all I could do was grin. In truth, we had caught several perch that were equally large. Still, there’s something about each ridiculously huge yellow perch that simply brings a smile. Of course, it didn’t hurt that we had also caught a huge number of fish – nor that we were about to go catch a mess of Devils Lake walleyes.

Devils Lake, which spreads across more than 220,000 acres in North Dakota’s prairie country, is legendary among ice anglers for its giant yellow perch. Arguably, no major lake provides a better opportunity to catch 2-pound-plus perch through the ice. Devils is not an all-or-nothing destination, though. Extremely fertile and offering diverse and plentiful habitat for the fish, this lake also supports tremendous populations of perch, walleyes and northern pike, so fast action is common for anglers who understand how to find the fish.

Devils Lake also offers a long — very long — ice season. Jason Feldner of Perch-Eyes Guide Service pulled his first limit of walleyes through the ice before Thanksgiving this year, and he wasn’t being overly eager. He was set up on more than 7 inches of good ice.

And the ice won’t go away until well into spring – long after anglers have been forced to abandon hard-water efforts through much of ice country.  Feldner said he normally ice-fishes about a week and a half into April.

Devils Lake is massive and exceptionally complex, with waters spreading over dozens of bays, potholes and backwaters, and wrapping around endless-seeming points and islands. Fed by a vast watershed and lacking any real outlet, Devils Lake changes in size from season-to-season, so sometimes-isolated backwaters can get recaptured by the rest of the lake.

The lake’s most western primary basin is mostly shallow with plentiful flooded timber. Central and eastern sections of the lake offer far more deep water. Extreme fertility causes the fish to grow quickly and get chunky throughout Devils Lake.

Because of the lake’s size, complexity and the fish’s fondness for structure, Feldner considers a good lake map critical. He believes Lakemaster offers the most useful Devils Lake map because it has 1-foot contours, which paint a detailed picture of bottom breaks. He also considers electronics crucial for finding fish and gauging their behavior as he plays with different lure presentations.

Feldner commonly employs a split-day strategy, targeting walleyes or pike first thing in the morning and/or late in the afternoon and focusing on yellow perch through the middle of the day. That typically involves a location change or two. Perch schools avoid the structure and the shallow areas that hold the most walleyes and pike.

Feldner usually begins his ice season focusing on the shallower western part of the lake, and the “deep” perch areas that he fishes in the middle of the day might only be 15 or 20 feet deep. As winter progresses, he typically works his way east and into deeper water. Through mid-winter, he commonly targets perch in 30 to 50 feet of water. Late in the season the fish start moving shallower again, so he starts spending more time in the western part of the lake.

Feldner does virtually all of his targeted walleye fishing from just before first light until an hour or so after daybreak and during the last couple of hours of daylight. In the evening he might fish another half an hour or so after dark, but he noted that there is not normally much of a night bite.

He points toward humps as good walleye-holding structure and stresses the importance of setting up right on the top of the structure. He likes a noisy, aggressive bait for Devils Lake walleyes and normally fishes with a Lindy Darter or a Rattl’N Flyer Spoon tipped with a minnow head. His favorite Darter colors are Natural Perch and Red Glow. For Rattl’N Flyer Spoons, he likes Techni-Glo Firetiger and Perch.

When Feldner moves into perch mode, he often begins near the outside edge of a point or rock hump, focusing on the transition area where the rock gives way to mud.

“Perch are usually just off the structure. They really like that mud bottom,” he said. “Sometimes you have to drill a lot of holes to find them.”

He also focuses on old, submerged wood cover when looking for jumbo perch. The submerged trees attract shrimp, and the shrimp attract the perch.

“It can be aggravating trying to fish around the trees, and you will get hung up, but they can hold a lot of perch,” he said.

Feldner usually begins aggressive, using a small Rattl’N Flyer Spoon or 360 Jig and kicking the bottom in hopes of attracting fish. He tips both lures with a minnow head. If the fish come in but won’t quite commit to the aggressive baits, he downsizes to a Lindy Toad tipped with larvae or waxworm.

He keeps the baits very close to the bottom and watches his electronics to gauge the mood of the fish. He likes to keep a bait moving virtually all the time, but often uses very slight motions.

Devils Lake also supports a good northern pike population. Feldner mostly targets pike with tip-ups, fishing close to the shore and spreading his holes between 2 and 8 feet of water.