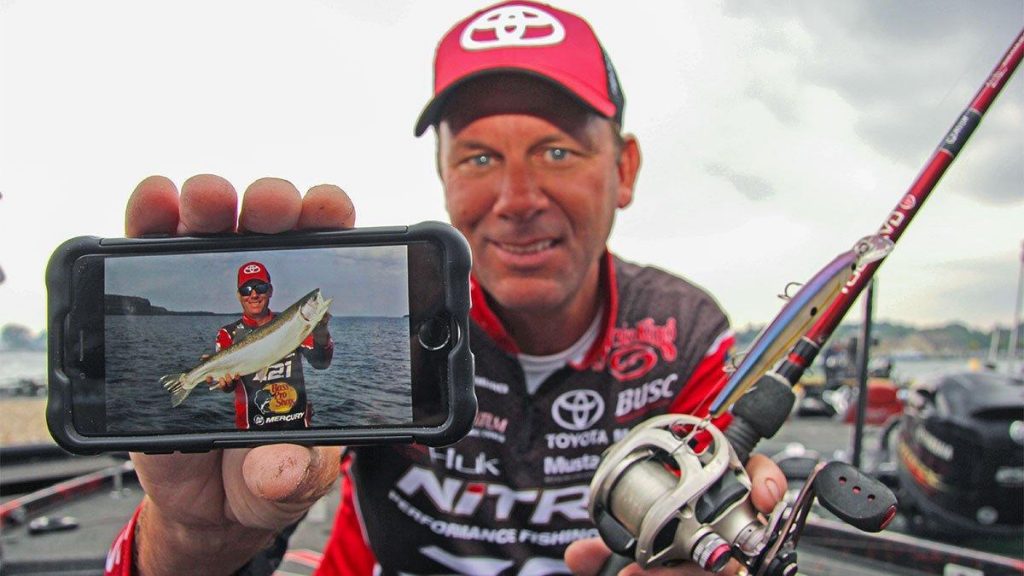 Kevin VanDam is the greatest bass angler of the past two decades and the all-time leader in B.A.S.S. prize money, but based on the healthy abundance of species swimming in Lake Michigan, even KVD can’t predict what he’s going to catch on any given cast here at the Toyota Angler of the Year tournament out of Sturgeon Bay.

“In the four days I’ve been on the water, I’ve caught king salmon, steelhead, smallmouth bass, northern pike, perch and walleye,” grinned VanDam, a proud Michigan native. “That’s the cool thing about fishing around the Great Lakes, you never know what you’re gonna catch, and there’s a good chance it will be big.

“This steelhead I caught today probably weighed 10 pounds and it came from the same exact rocky shoal where I caught a legitimate 6-pound smallmouth in practice,” added VanDam, showing a photo on his cell phone of the steelhead after day one weigh-in as a storm pushed toward Centerpointe Marina.

Better yet, VanDam says you don’t need a ton of tackle to catch the wide variety of species that swim here.

“All those species came on one lure, with one rod and reel—a Deep Diving Strike King KVD jerkbait, on a 6-foot, 10-inch medium-heavy Quantum TourKVD rod and a Quantum EXO spooled with 12-pound Bass Pro Shops XPS Fluorocarbon.”

VanDam says the lure’s color is called “Crystal Shad”, but that its ability to get around 10 feet deep helps put it in the neighborhood where so many different species swim.

“The Great Lakes have always been abundant with a variety of species, and that variety has been made even greater due to the stocking efforts of state agencies,” says Gilliland. “For example, the steelhead Kevin caught is basically a sea-run rainbow trout and rainbows are native to the Western U.S., so those fish are here directly as a result of being stocked.

“As great as the smallmouth fishing can be around Door County, they actually play second fiddle in popularity to salmon, and even walleye and perch—it’s just a great and diverse fishery.”