We had a unique privilege to visit with someone that all of us at Wired2Fish consider one of maybe five of the top innovators ever in fishing, Ed Chambers, owner of Zoom Bait Company. Alongside Chambers were Chris Baxter and his first and longest employed right-hand man, Ed Wortham. Chamber’s son Ed Jr. was away on vacation, but we were in for a real treat we could tell when we walked through the front door.

The factory floor is visible from the front offices and hallways through glass walls that overlook the shipping and packaging areas of the plant. Further into the plant was the actual injection molding area, and beyond that was where the plastic is formulated, something Chambers has always done in house.

“We formulate our own plastic, make our own colors, mold it, package it and ship it all from this location,” Wortham said.

“A lot of people just think we’re a little country company out in the woods,” Chambers said.

It was obvious they were not. Some of the facts and figures about Zoom are absolutely mind-blowing and a huge testament to how effective their baits are and how well received they are by fishermen all over the world.

While touring on the injection-molding floor, we kept hearing a recognizable sound of air pressure being released. I leaned over to Chris Baxter and said, “That sounds like a dump truck releasing its brakes.” In fact, it was very similar parts. 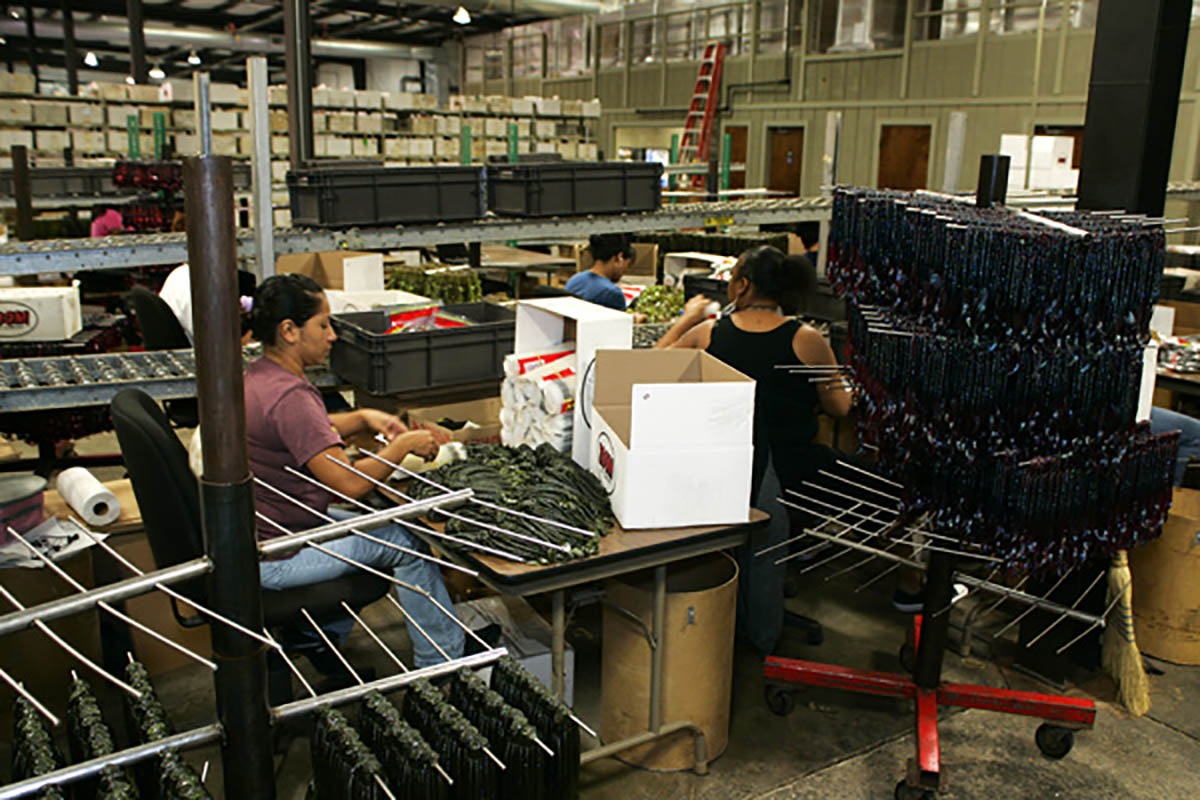 “Ed built the original machines, and we build, strip apart and rebuild every machine every 6 months,” Baxter said. “We use a lot of familiar equipment that’s maybe not familiar in injection molding.”

<p”>There are more than 30 stations that can inject plastic into the hundreds of molds Zoom has on hand, and each station gets assigned a certain bait and color or series of baits and colors depending on the orders received.

Hearing the hissing and pressing, it was amazing to see the precision of the operation. Each station can crank out as many as 40 worms a minute. That’s what they call two runners. A runner is basically a mold full of baits that come out of the mold with a runner attached so that you can easily handle multiple baits at once.

The baits then are hung on racks. Once the volume is met, the racks of runners are taken to the packaging area. There the runners are pulled loose from the worms and packaged. The folks packaging don’t count worms. They’ve been doing it so long; they can literally tell when a trick worm is missing from a run just by how it feels in their hands. Depending on the size of the baits a pack might be two runners or just one runner.

It was absolutely fascinating to see the machine that is Zoom manufacturing in motion. But more fascinating was talking to Ed Chambers about how this all came about.

The name for the company actually had an interesting story as did the branding and colors for the packaging. 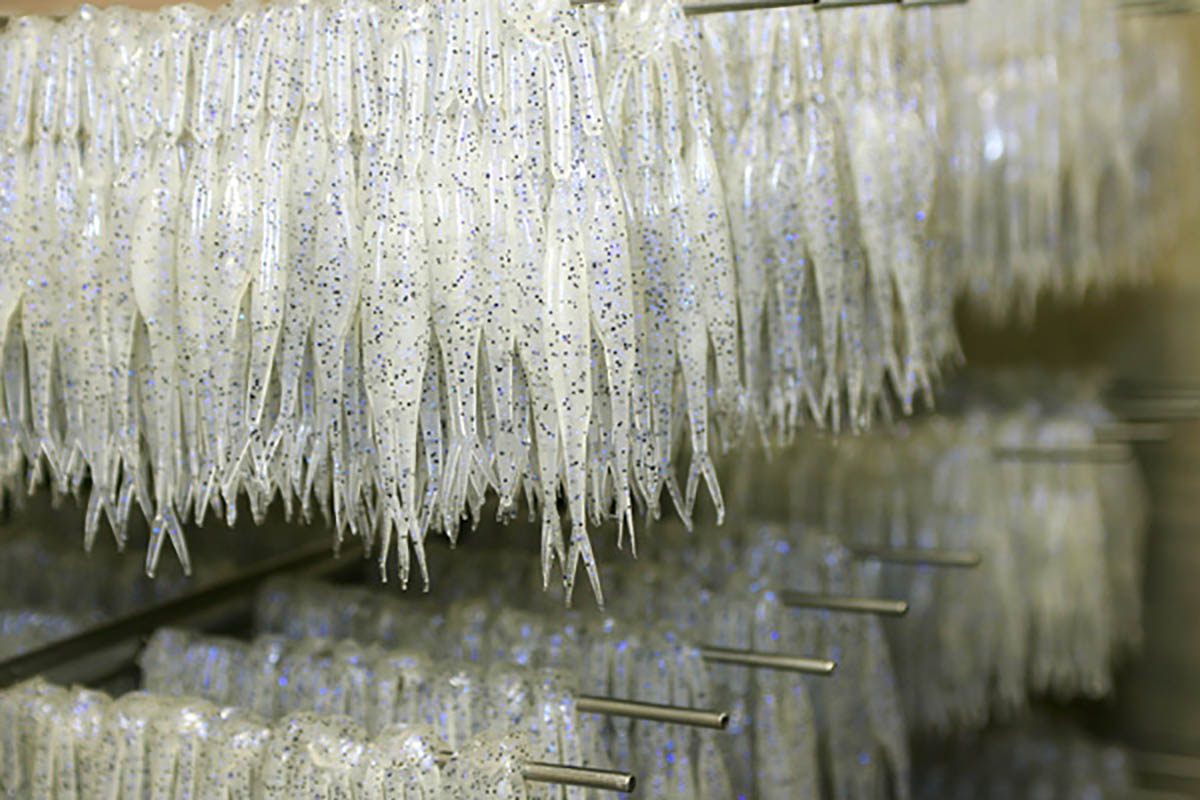 “The boy who made the molds for us, his last name was Zimmerman,” Chambers said, “but everyone around here just called him Zoom. After the first worms were poured, someone asked who made those, and they said, ‘those are those worms from Zoom.’ Of course they meant the guy that made the molds, but we liked it and kept it.”

As for the branding, that was even better.

“We were studying all the packaging out at the time,” Chambers said. “Everything was black and white, blue and white or green and white. So I wanted something that stood out, but there were some limitations on colors with the local printers. So I had to keep it somewhat simple. What I noticed was when it was 50 or 100 yards up the road, you could always recognize a McDonald’s fry cup lying on the side of the road, just from its colors. It really stood out.”

And the rest, as they say, is history.

Back to the manufacturing, Zoom is in its busy season September through April. Some colors are only run once a year because there is only a demand for certain colors once a year. So they anticipate the demand and meet orders from their major distributors, retail chains and tackle shops early in the process, and that color might not be run again for another year. 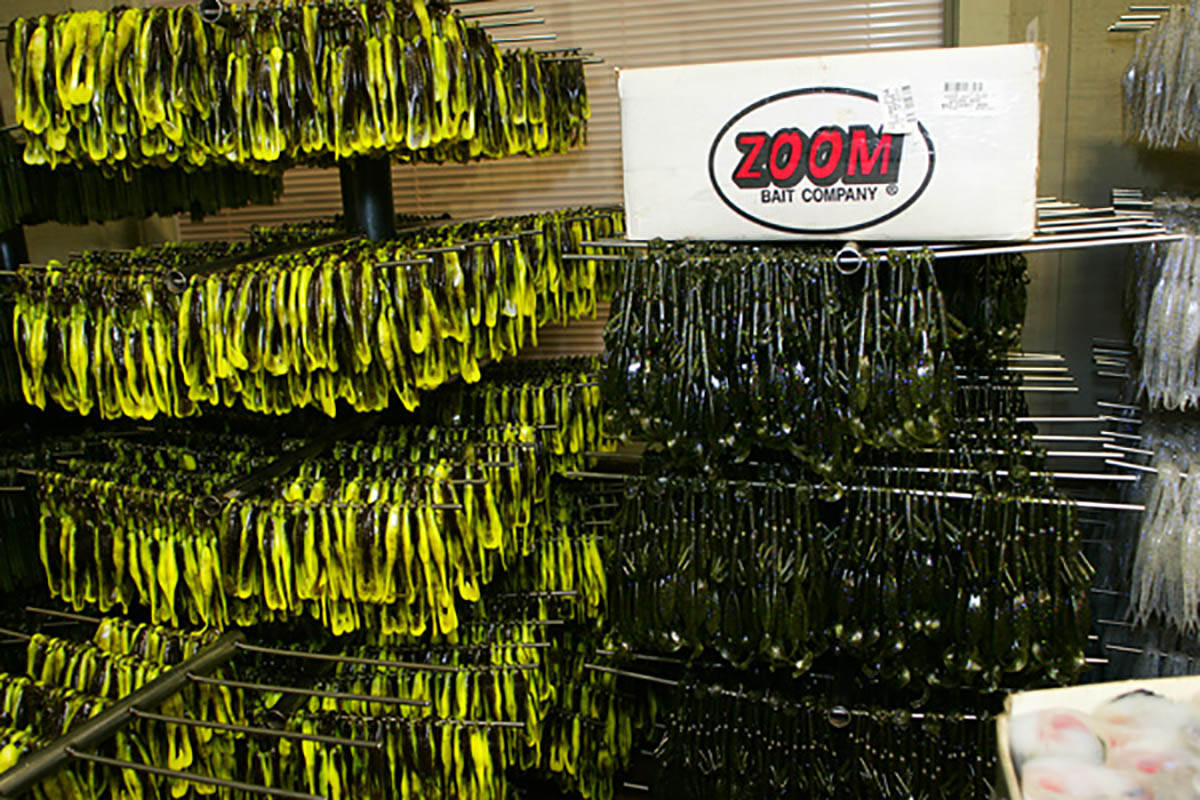 The runners we spoke of earlier don’t go to waste. All the left over injected plastic is sent off to be recycled where the pigment is removed and then used to make soles of shoes, rubber boots and those orange cones you see along the roadside. That enables Zoom to only use fresh new plastic in their worms where some  manufacturers might regrind and mix new plastic with old plastic.

Zoom started in 1977 with Ed still working his other full-time business selling and repairing gaming machines. In fact, Ed Chambers was the first person to bring poker machines into the state of Georgia. While working that business, he started pouring worms that he couldn’t find anywhere else.

“I made things that I couldn’t buy,” Chambers said. “I’d know what I wanted and couldn’t find it anywhere, so I’d just make it myself.”

He hired Ed Wortham while Wortham was still in high school, and Chambers would work his full-time job all day, come home and eat dinner, and then the two of them would pour and package worms until midnight. Their first plastic mixer was a Mercury Thruster trolling motor in a 55-gallon barrel hooked up to a car battery that was hooked up to a battery charger that was plugged into the wall. My how things have changed. 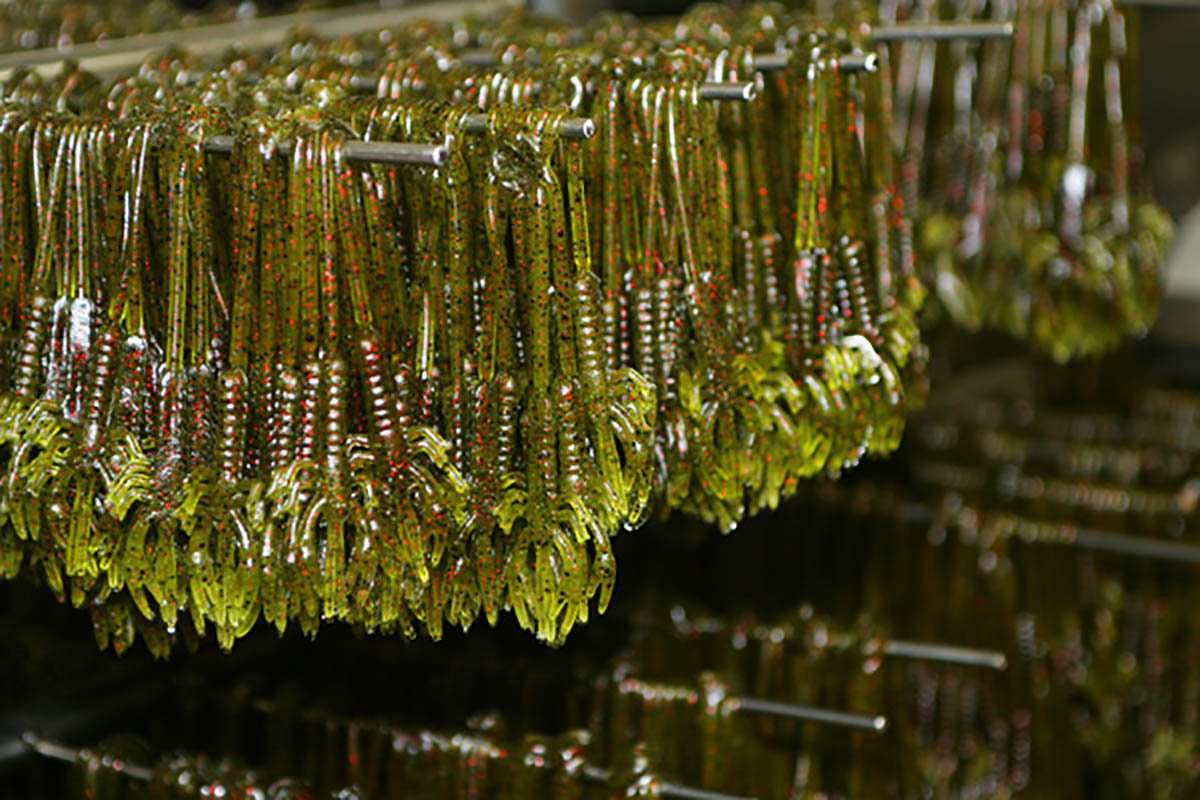 Along the way, Ed has been able to help other companies develop some very unique and influential products. He assisted in developing the bill and bait shape to make the Mann’s 30-plus crankbait. He came up with the idea and talked with Lew Childress about making a v-spool on a reel to manage the line better on a baitcaster.  Weeks later he was testing a prototype Lew’s baitcaster with his spool in it.

Several other baits and ideas came from the brain of Chambers that he never got credit or money for, all because he was just exceptionally gifted at seeing a problem and figuring out how to solve it.

Now the “Zoom Empire” is ran by several down-to-earth, unassuming guys that absolutely love bass fishing. Wortham was preparing for an upcoming night tournament this Saturday; Baxter had his boat up at the shop getting it gassed up on the way to work for running a camera boat at the Forrest Wood Cup. Chambers was headed back to his WEC shop (article on that coming soon) to paint and work on crankbaits.

When you buy a Zoom bait, you are buying a product that has been a labor of love for more than 33 years for Ed Chambers and Ed Wortham and now the folks working alongside those two. The enthusiasm Chambers has for creating a new shape of plastic or carving a new crankbait or even changing the line pull on a lip of a bait is tangible. You can feel it when he speaks.