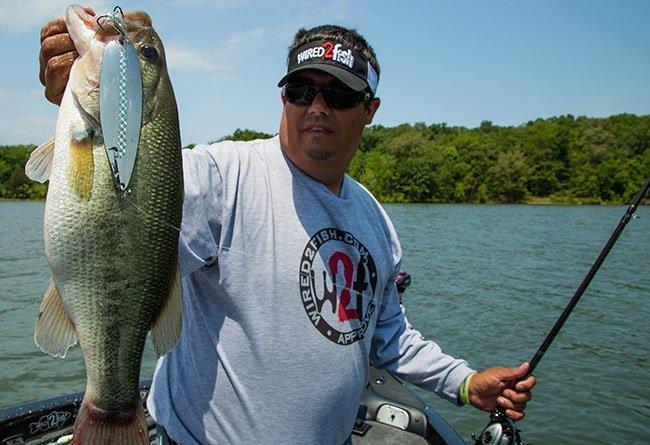 I like big baits and I cannot lie. Yeah I borrowed that from my one of my favorite rap songs of the 90s. But I have learned a lot about big lures for bass fishing in recent years from other anglers and my own experiences and applied it to my fishing.

So I thought I would share what I’ve found over the last 3-4 years of experimenting and the recent advances in lures to give us more options as anglers for that one big bite we might be needing.

There are several things to consider when talking about big baits for larger bass and when to throw them, but here are a few to think about:

I have fooled a lot of bass over the years on big baits but it took me a long time to convince myself to pull out the larger than average lures for bass.

I think anglers overlook the effectiveness of a big profile in a lure and the effect it can have on a bass that a much smaller lure won’t have on the same big bass. I also think anglers narrow “big baits” down to just swimbaits. I love to throw swimbaits now. It took me several years to get to where I understood what situations called for it and where to intersect bass with them. But now they are always in my boat in one fashion or another.

However, I’m probably throwing other big baits as much or more for big bass. I’ve fished a bunch of lakes in California with some big swimbait guys. I’ve fished most of the famed fisheries in Florida and Texas and all the lakes on the TVA chain. And spending time on those big fisheries, I’ve had the opportunity to see a lot of bass eat a lot of big live baits. Bluegills struggling on the surface, big gizzard shad fleeing away, snakes … I even saw a bass eat a baby duck as a kid on my grandmothers lake in Winter Haven, Fla. I ran up on a 6 or 7-pound bass with a 1-pound Tilapia stuck in its mouth on Falcon Lake.

The undeniable fact is big bass are opportunists. Something big, struggling, acting erratic, cruising along in an unsuspecting manner, looks like an easy filling meal for a bass that needs a lot of protein to sustain it’s fat and healthy lifestyle during the warmer months or maybe that once a week meal in the colder months. Witnessing several big bass on many different fisheries across the nation convinced me there are big bait opportunities in a lot more places than California, Texas and Florida. 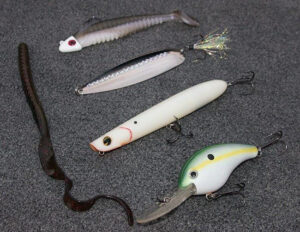 When to go big

Obviously where you fish can dictate when you will throw big baits, but we’ll save that for our next thought. But when can be related to weather, time of year, the mood of the bass and the available forage.

Typically I’m reaching for bigger baits when the water is warm and the fish’s metabolisms are revved up. They eat multiple times a day or maybe one big time. If they are chomping on a bunch of 2-inch baitfish and suddenly one comes swimming by that looks like a better meal that is 6 or 7 inches, those bigger bass seem to get seriously defensive about a big prey being in their feeding zone.

A big bait can be a trigger for pressured fish at times too. Not always but I’ve seen where you pull up to an area that had been producing fish but they don’t seem to be biting anymore and pickup a bigger bait and catch a big fish that was still in the area but conditioned to all the smaller baits that have been bombarding it.

Times I’ve found that really excel for big baits start in the prespawn when the bass are feeding up before going on the bed. They eat a lot and will eat a larger than average lure. Then in the summer during late post spawn, the bass are recuperated, they group up and really eat big lures for several weeks pretty strong. Then they will get off them en masse and you can still pick them off one at a time or in small little packs here and there throughout the summer. Then again in the fall. The baitfish are large. And the bass feed on big profiles again. This is that time of year where you can go catch 50 and your best 5 will weigh 10 pounds on schooling fish. Or you can go throw at targets and points with big baits and maybe only get 5 bites, but they will weigh 25 pounds. 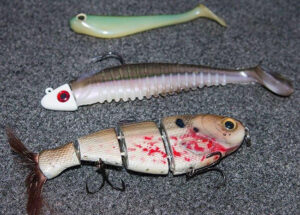 Where to throw em

This will be the part that you’re going to have to learn yourself. Are big baits applicable on your fishery? I can’t say for sure. It might produce the biggest bass of your life. But it also might lead to a lot of fishless days. That’s one of the things I learned slinging big baits with guys out west. They are looking for the biggest bass in their lakes. And many of them fish smaller lakes. They know that throwing that big bait might not appeal to 98% of the bass on the lake. But that 2% is what they are after.

However knowing that, you have to expect that 98% of the time you’re not going to catch anything either. Now there will be days and times in a day where the fish are feeding, gorging and you’re going to catch them like you’ve never caught them before.

As far as where to throw them on your fishery, start on major feeding zones like main lake points, long big secondary points in creeks and bays, major flats (probably my favorite) that can be either deep or shallow, and channel swing banks. 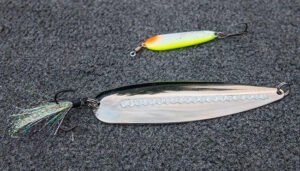 These 5 baits are more than a handful

I have used the following five lures in their more recent larger sizes in the last few years with good success:

Of all the big baits, I probably have a big swimbait in my rod locker or on the deck year round. You can get a big bite in cold water on it just as well as in the dog days of summer. Some of my favorites for big swimbaits are the Huddleston, Rago 999 Line Thru, Berkley Slim Shad and Berkley Swim Shad. In hard baits I like a Bull Shad and a Spro BBZ-1.

A big flutter spoon may be more than 6-inches long and weigh more than an ounce. It’s a big profile but it catches 1-pounders as well as it does 7-pounders. When the fish are first grouping up in the late post spawn period is when I find this bait really excels. But I’ve caught them around deep trees and brush although you have to be patient because they are snaggy. Most incidents are resolve with a pop on your slack while directly over the lure and knocking the spoon against the tree to get it loose.

I’ve been throwing topwater baits like Heddon Chug’n Spooks, Ima Big Stick, Big Smithwick Redfins for bass all over the country. It’s amazing to me how savagely a big bass will attack a big bait on the top. It’s not really a numbers bait with these big lures. You’re really trying to agitate the alpha bass in the area.

A 10-inch worm might seem big. Until you put a much larger, thicker 12- or 14-inch worm next to it. And I’ve found when you use those big worms, you don’t have to always just drag them along. A lift and drop and even stroking the worm way off the bottom and letting it swim back works great. Sometimes swimming those big worms around grass or slowly over a deep point has worked wonders.

A 6XD seemed like a big deep diving crankbait when it came out. But you put a swimbait next to it and crankbait doesn’t seem that big anymore. Enter the Strike King 10XD and the Lucky Craft SKT Magnum crankbaits. These baits are massive, dive deep, and can be harder to throw than a swimbait because of their weight. But they catch big bass. I’ve found these baits also excel in the late post-spawn and early summer periods. 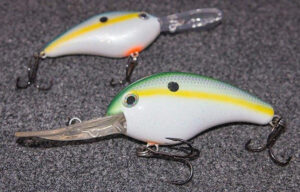 Not easy and requires precautions

The biggest thing you’re going to need to know when trying out larger than average baits is they require some beefed up tackle. Heavier pound test on line, more power and backbone in your rod and a reel that can handle the torque of the larger lures. The heavier rod is critical. One it will keep you from injuring yourself trying to heave big  plugs around. The heavier line will keep you from snapping the heavy lure off if something goes wrong on the cast and will help give you control of the lure and the big bass that will eat it.

The other caution is I have also seen where a big lure actually offended the bass. I’ve seen where you mark a big school of fish, throw a big plug or a big spoon in there and suddenly you can’t get them to bite. It’s like they got turned off by the bigger baits. I’ve especially seen this in really clear water. I still have caught them on big swimbaits when it gets like this, but it also tells me that a big bait can be the wrong choice at times.

You have to condition yourself and dedicate yourself to throwing the bigger baits for the sake of learning when they work and don’t work. Some people will pick a big swimbait up and throw it for 20 minutes and then talk about how they just can’t get them to eat a big swimbait on their lake. The fact is you probably threw other lures for hundreds of hours before you got good with them on those same bodies of water. So you’re not going to unlock the big bait windows in 20 minutes of trying.

The reward for the dedication is often that you’ll catch big bass you didn’t know even existed or thought you could catch on your fishery. You might catch the biggest limit of your life when the stars align.

We think our lures are big. Yet I see countless stories and pictures of guys pulling out baitfish that are still larger than our biggest lures of fish they caught. 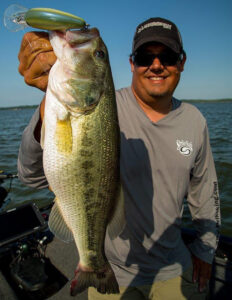