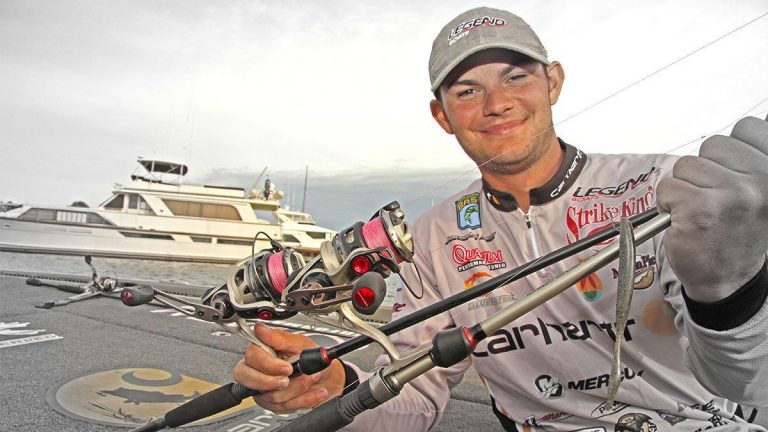 Much the same goes for the pink braided fishing line that blares like a navigational light on the bow of the young Alabaman’s boat. Asked why he spools his Quantum spinning reels with uniquely colored pink braid, the 24 year-old responded with an honest grin, “Because they were out of fluorescent yellow.”

While most naturally obsessive bass anglers would fret over a retailer’s lack of fluorescent yellow, Lee somewhat mindlessly chose the next best thing—fluorescent pink. And based on his remarkable Top 10 finish in this season’s Toyota Bassmaster Angler of the Year standings, apparently the bass aren’t as picky as most of us think they are.

“Whether it’s yellow or pink, I just want to be able to see it,” Lee said. “It’s something I figured out early last spring at the Bassmaster Central Open on Lake Amistad. We were drop-shotting really finicky bass in that deep, clear, water, and I could hardly see the green braid I was using, and that’s a problem because you can’t tell nearly as well if your line moves when a bass grabs your Dream Shot as it’s falling.”

Lee soon switched to fluorescent colored braid and it has increased the number of finesse bites he’s connected with ever since.

“I was letting my drop shot fall next to a big buoy out on Green Bay, and by watching the pink line, I noticed it kinda stopped falling way sooner that it should have. I set the hook, and sure enough, a keeper smallmouth had my bait. That’s a fish I might have never seen bite with green braid or clear fluorocarbon.”

Speaking of fluorocarbon, Lee ties a fluorocarbon leader between his hook and the pink braid.

“I’ll use a pretty long fluorocarbon leader, up to 12 feet or so when we’re targeting Smallmouth in 20 or 30 feet of water, but I’m still always able to see exactly what my line is doing near the surface with the pink braid.

“I don’t think pink or fluorescent yellow gets you any more bites. There’s no magic to it as far as increasing the number of fish that eat your lure, but I definitely think you’re able to see the bites you do get that you might not have noticed with green braid or fluorocarbon.

“The other thing I really like about fluorescent braid on a spinning reel is that I can tell where a bass is headed once I’ve set the hook. That helps a lot as they’re coming out of deep water, and you’re fighting them on light line.”

Jordan’s beloved bass pro of a brother, Matt, once joked that Jordan might forget to tie his shoes and brush his teeth before leaving the house, but only because he’s too focused on the how to catch the next bass.

Such is the life of Jordan Lee—don’t overthink it—as long as it will help you catch the next bass. And that includes pink braided line.