Anglers often find fall bass to be finicky and spring bass to be spry. A lot of truth comes from that colloquialism. If you think about it, anglers generally do not bother winter bass much, so when spring comes, they are ready to chomp anything that moves. Fall bass have been beat on by anglers for months, and they’ve been educated on artificials. Not to mention the numbers of available natural forage are at their highest in the fall.

For these reasons, anglers employing techniques like swimming a worm in grass for bass will be more productive.

Swimming a worm in grass probably means different things to different fishermen. Some think buzzing a Speed Worm on the surface, while others think of hopping a Texas-rigged ribbon-tail worm up and down through deep submerged grass. But somewhere in between is where a lot of bass can be found and caught. 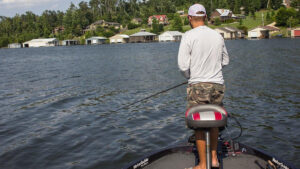 Best grass for swimming a worm

Many types of grass will produce bass on a swimming worm. We talked with professional angler and Lake Guntersville guide Jon Henry who has had lots of success around the country swimming worms in grass.

“Swimming a worm catches bass whether it’s Florida or Alabama, Minnesota or California,” Henry said. “But I do look for more scattered grass, and not heavy matted grass.”

Henry considers the technique a finesse approach and more of a subtle spinnerbait or even more subtle than a regular swimbait. 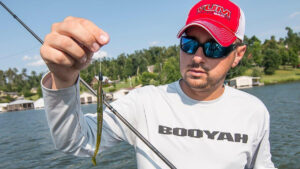 Cover water with a swimming worm

“I like two different worms depending on the water clarity and even mood of the fish,” Henry said. “If I want a more subtle presentation where the bass are feeding more visually than by feel then I will use a YUM Swimmin’ Dinger. If the water has a little stain or the water chops in the wind, I will reach for the YUM Thumpin’ Dinger.”

Henry fishes his swimming worms much like a spinnerbait or a chatterbait. If he’s searching for bass on big flats, he fan casts the area. If a cold front or fishing pressure has put bass in a negative mood, the swimming worm will still identify whether or not bass are still in the area.

A straight steady retrieve will generally produce bites. But Henry changes speed to the mood of the bass. When they get more aggressive or as he gets more bites, he will increase his speed. When the fishing is real tough, he slows his retrieve to a crawl but still gets action out of the tails. 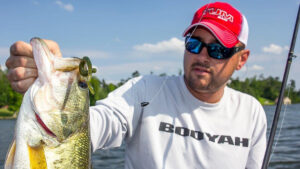 While spawn often produces the best catches on the swimming worm in grass lakes, fall is where the technique can really shine. Fishing is generally tougher in the fall than in the spring for a variety of reasons, one of the main reasons being the water is often clearer on many reservoirs than it usually is. Sometimes that more subtle approach to an area produces when fish can see an artificial a lot more clearly.

The fish tend to scatter and regroup during the fall. If you catch them grouped up and schooling, you can catch them fast and furious on power techniques like spinnerbaits and Rat-L-Traps. But when they spread back out, they can be tough to pinpoint and very leery of other presentations. That’s when a swimming worm can save a fishing day around grass.

During the spawn, fish really relate to plastics a lot better than hard baits. A swimming worm produces big catches all across the country when bass are about to nest or just coming off the nest.

Tackle suggestions for swimming a worm in grass

Henry keeps his tackle simple for swimming a worm around grass. Because he considers it a finesse technique and is looking for very specific scattered grass situations, he sticks with 15 to 17-pound fluorocarbon. He’ll thread a 1/8 to 3/16 ounce bullet sinker on the line and tie it to a 4/0 Gamakatsu Superline EWG hook.

He will fish it on a 7-foot, 3-inch Falcon Amistad medium-heavy power rod. But the key comes from rigging the worm properly.

“You have to be a stickler about the worm being straight,” Henry said. “I use that 4/0 Superline hook because it keels better and the worm will rig perfectly straight on that hook. If it’s not straight it will not swim straight and the fish just don’t react to the swimming worm if it’s swimming crooked or inconsistently.”

He sticks with greens for worms. He’ll either fish a watermelon or a watermelon red. He acknowledged that green pumpkin works too, but in those clearer waters where you often find grass, something about the bait being translucent seems more natural to the fish and he gets more bites.

Swimming a worm for bass around grass works great on lakes like Okeechobee and Guntersville, as well as expansive fisheries like the Lousiana Delta, the California Delta, and many other lakes with sporadic submerged grass in large areas where bass have a tendency to spread out more. 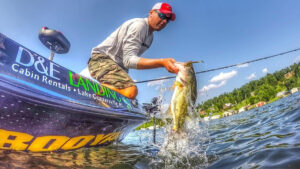