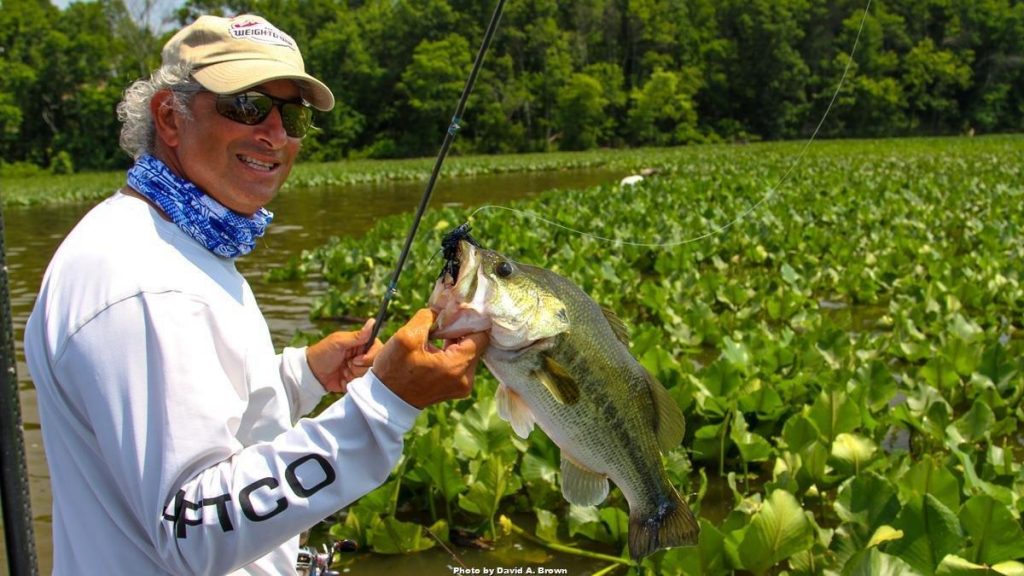 Roof, refrigerator and A/C – that’s what the southern freshwater habitat generically termed pads means to a largemouth bass. Herein, the fish find cover, they can ambush all sorts of forage and they enjoy temperature moderation – warmer in the winter, cooler in the summer.

If you want to go a step farther, you can add the part about oxygen production. That’s what plants of terrestrial and aquatic species do – they take in carbon dioxide and “exhale” O2. Basically, life’s pretty good in the pads.

Laying flat on the water’s surface, lily pads get most of the attention and the round tops connected to durable stems are absolute bass magnets. But so is spatterdock. This plant sprouts more of a heart-shaped pad that typically rises several inches above the water’s surface at maturity.

Referring to either, or both, of these plant species as “pads” will earn you no scorn. The generic works fine, whether you’re fishing true lily pads in Florida’s Lake Kissimmee or spatterdock fields in a Potomac River tributary.

In any case, bass opportunity likely abounds under just about any canopy of pads. Here’s a rundown of points to help keep you on track. 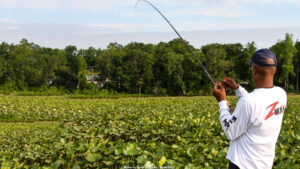 Few instances will find a healthy pad field devoid of bass, but there are certainly peak periods. Heavy fishing pressure will always drive fish into hiding, but so will sunny skies. Overcast days allow fish the comfort to roam at their pleasure, but when you’re shading your eyes, consider that bass have no eyelids, so it’s not hard to figure out why they like stuff over their heads.

This point intensifies when a passing cold front leaves the dreaded bluebird skies in its wake. Crisp, clear conditions mean super-intense sunlight and that’s something that’ll send a bass deep into cover every time.

FLW pro Jim Dillard said this requires a patient, stealthy approach to avoid spooking bass that are already suffering a bad-hair day. In such circumstances, he’s a big fan of swapping the trolling motor for a push pole.

“That’s a good (strategy) on a high-pressure day. Sometimes, there’ll be more fish there and you don’t want to spook them. You want to take advantage of the situation because you need every bite in these conditions.”

Pads are great at providing cover for bass, but lousy and keeping secrets. Think about it: under a weed mat comprising mostly floating vegetation, bass can traverse the shadows virtually undetected in the cavernous underworld.

Even in bottom-rooted grass such as hydrilla, a stealthy fish can part the strands with little topside evidence.
In the pads, they’re not so lucky.

Any field of pads dense enough to consistently attract bass will make it hard for a fish worth catching to move an inch without bumping, bending or otherwise wiggling a stem. Move the stem and you move the pad.

Suffice it to say, if all the pads are standing still, or leaning to one direction and one of them suddenly easy the other way, somebody’s moving around below.

And then there’s the audible stuff. Next time you visit a big field of pads, stop first on the perimeter and just listen. If it’s healthy habitat, there will be lots of aquatic bugs and this insect forage won’t escape the ever watchful eye of the south’s most gluttonous panfish.

“If you’ve ever been around an active bunch of pads, you’ll hear those bluegill grabbing bugs off the surface,” said reigning Bassmaster Elite Series champion Greg Hackney. 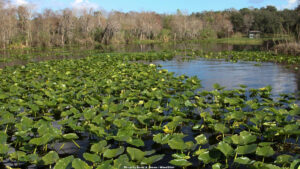 Troy Garrison, who competes in the FLW Rayovac Series, often targets Potomac spatterdock. He’ll follow a rising tide into the inner reaches and stake out the edges on falling water to pick off fish escorted out by diminishing depths.

With or without tidal fluctuations, Garrison notes the wisdom in seeking travel lanes and points of greater vision/access for the fish.

“On tidal waters, such as the Potomac, I really focus on looking for any type of slight channel that bass may use,” Garrison said. “On non-tidal water, I look for heavy pad cover with occasional openings where the bass can see the bait.

“Also, I try to get as far back in the pads as I can. If you think you’re shallow, get shallower. I’ve caught big bass in 8-10 inches of water.”

FLW Tour pro Larry Nixon makes a few key observations about his pad targeting. First, while massive pad fields might hold lots of fish, the search for spread-out bass could consume lots of time. On the other hand, Nixon favors isolated patches of pads because they’re easier to probe and assess and they’re often overlooked by other anglers, so their potential can be proportionately higher.

“When you get a bite, stop and focus on that spot,” Nixon said. “Often times, the fish will be very concentrated around a particular spot, maybe there’s something on the bottom they like. They’ll be packed in there pretty tight so if you get them going, you can catch a bunch in a hurry.”

Other sweet spots include points in pad growth, transitional lines between pads and other prominent vegetation, rafts of hyacinth or other floating vegetation lodged in a pad field and, of course, additional structure like stumps and laydowns.

Nixon notes that, while the outside perimeter and the inside edge of a pad field may hold significant potential, a few considerations merit pondering. First, fish are generally easier to extract from the outside edge, but windy days can make it tough to work efficiently.

The inside edge, Nixon said, is often an overlooked deal, but he knows that the shallow preference of most southern baitfish, along with seasonal bream beds may attract serious bass attention. And when those windy days hinder efforts on the outside edge, the wave activity will stir up more oxygen in the shallows and stimulate more activity.

In the year’s first quarter, it’s wise to embrace the value of pad stems – those barren stalks that’ll soon sprout new umbrellas with spring’s approaching warmth. Even in my home state of Florida, where assumptions of year-round balminess aren’t too far off base, some of the pads remain dormant with only skinny fingertips breaking the surface.

FLW pro J.T. Kenney reminds us that prespawn bass often stage in the stems because even without the tops, there’s enough structure for the fish to feel comfortable until it’s time to move up. Where pad fields retain some of their fullness, or when new openings coincide with the spawning movement, the fish may have to go far to find adequate bedding areas. 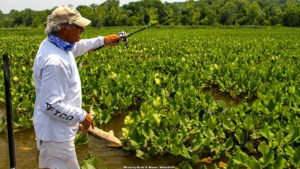 Bait options for pad fishing are many, but think about search baits and targeting baits. Garrison and Nixon agree that a topwater frog does a great job of probing the pads and stimulating reaction bites with an image to which bass are instinctively endeared. Although a popping frog can be effective in sparse pads and around those isolated clumps Nixon likes the narrow nose of a walking frog in thicker pads because it tends to push through better with fewer hang-ups.

For tracing through the lanes, cuts and ditches that randomly appear in larger pad fields, rig a soft body swimbait like a Reaction Innovations Skinny Dipper or YUM Lil Suzee on an extra wide gap hook. For a more subtle look Garrison goes with a weightless stick worm and occasionally transitions from swimming the bait to making targeted pitches into holes.

Bassmaster Elite Series pro Kevin Hawk’s a big Senko fan and when he’s fishing deeper pads, adding a bullet weight to his Texas-rigged bait enables him to fish it deeper in the water column. 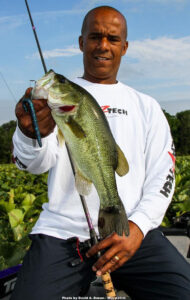 Whatever you throw for pad fish, you’ll appreciate the negotiating strength of a beefy outfit. Garrison uses a heavy-action Abu Garcia Veritas rod and a Revo SX reel loaded with 65-pound braided line.

It’s not only the density of the pads that can cause you headaches, but also the design of individual leaves. Lily pads and spatterdock both grow outward from the stem in two lobes that meet with a notch at the back. Get a bait caught in this tenacious wedge and you’re gonna have a struggle on your hands.

Pads claim plenty of baits cast from inferior string, but those who load up with braid know that even tough aquatic fibers are no match for the wet scalpel.

On the other hand, Garrison points to the wisdom of measure aggression when fighting a fish hooked in the pads.

“The best advice I can give for pad fishing is this: If you have a bass on and it gets caught in the pads, stick it with applied pressure and use the trolling to get to the fish,” he said. “You bull it, you lose it.”