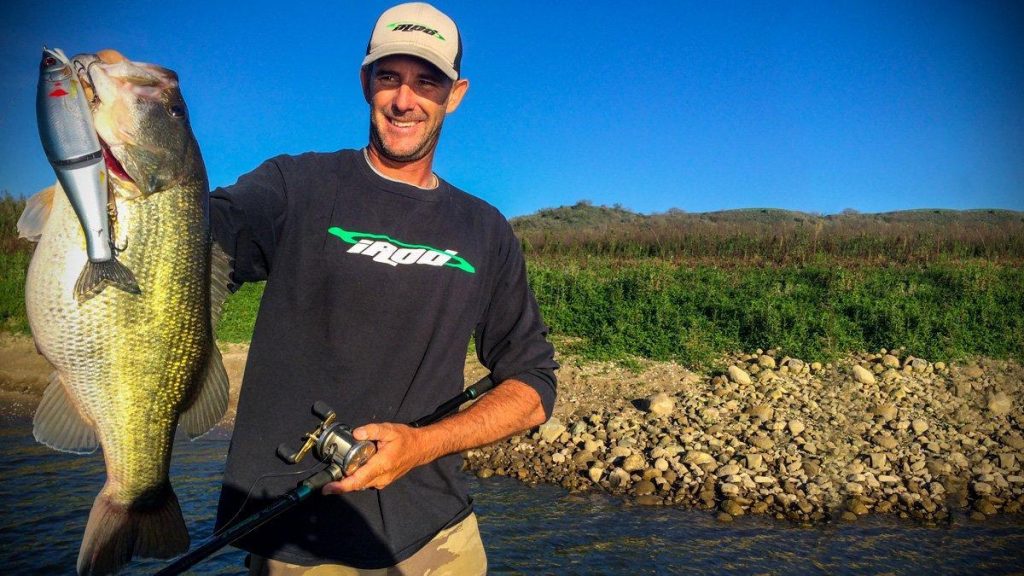 In part one of our glide bait series for big bass , we discussed some basics of glide baits with Butch Brown and talked specifically about one glide bait, the Deps Slide Swimmer. For part two, we wanted to hear about other glide baits and the behavior bass exhibit related to glide baits as opposed to other large swimbaits with another noted big bass angler, Matt Newman of Los Angeles, Calif.

Newman has been in the industry designing baits, fishing pro tournament circuits and now owns iRods, makers of some of the best swimbait rods on the market. Not only is Newman a wealth of knowledge on swimbait fishing but also the whole scene that began around big bait fishing out west and now is morphing around glide baits.

But he also has a wealth of experience with how bass relate to swimbaits and now with glide baits. That might be the most integral part of catching fish on glide baits.

Here are few of the things you’ll want to know about glide baits to help you use them effectively to catch bigger bass:

Get them to move

One of the first things Newman observed was how bass related to glide baits as opposed to traditional big swimbaits. A glide bait has a much wider S track with a lot more range of motion. On most big swimbaits, the move mostly linear. The bait moves on a straight path with a subtle tail kick and sometimes a body roll. Or if on jointed hard baits the bait will undulate but still keeps its linear path.

“The fish will track a standard swimbait for 50 yards without ever moving off their path,” Newman said. “But I found with a glide bait, the bass have to physically turn left and right to track the lure. This side to side movement seems to make them more susceptible to being triggered.”

So as the glide bait meanders left and right and then you pause it to let it glide off to one side, the bass generally react to this change in motion. Bass that track a swimbait in a linear path often don’t trigger. Instead they simply just fade out of site as the bait nears the boat.

Obviously there are times when a glide bait really shines and others where it won’t be effective at all.

“If it’s cold, I’m going to be throwing a Hudd,” Newman said. “Prespawn fish are so methodical and will track and follow for days, expending the least amount of energy they can. Post spawn fish however are jumpy fish. They are on crack. They will dart and dash and respond to a glide bait much better.”

So Newman starts reaching for his glide baits in April when the fish move up shallow and he’ll keep them on the deck until late fall.

Newman noticed when he was fishing Triple Trouts that they could pull fish up out of their zones and get them to come a long ways to inspect a bait. Adding twitches and pauses they could draw bass and get them to react. Glide baits have that same drawing power. Maybe even more so.

The drawing power also clues Newman into where to employ glide baits. Because he’s looking to draw bass, he needs bigger areas. He wants to be somewhat shallow as well so his favorite places to fish big glide baits are flats. Flats leading into and out of spawning areas are prime. There are times where main lake grass flats or stump flats are also deadly. 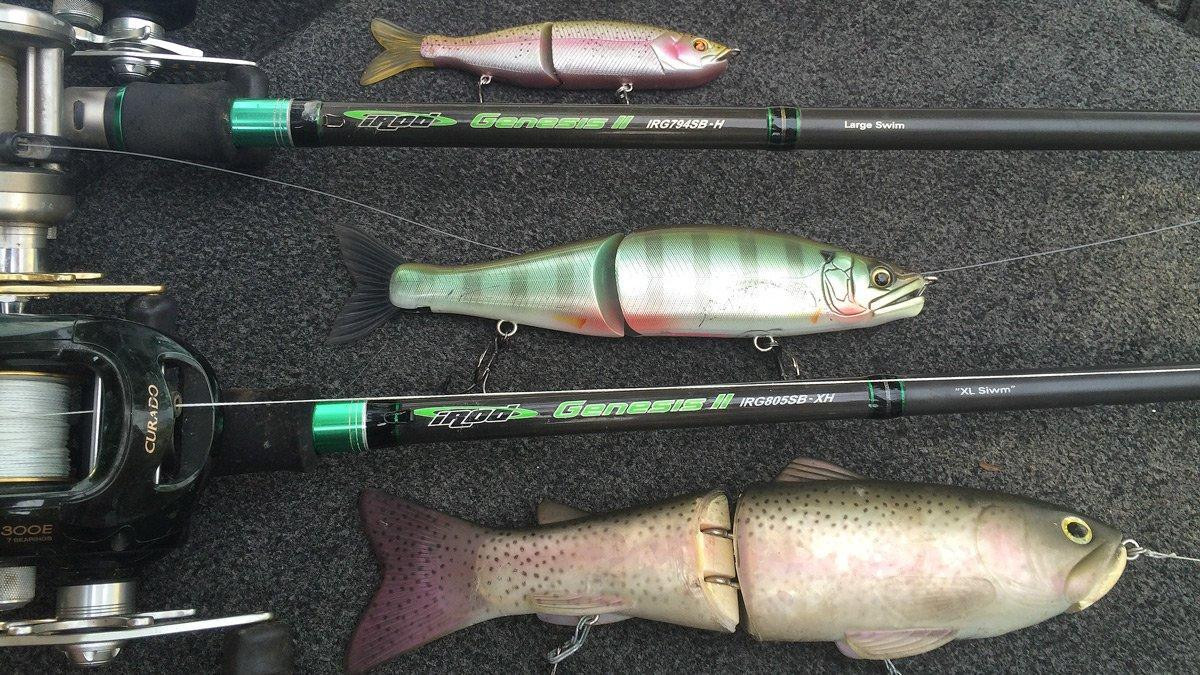 We all think bass will bite if our lure just gets near them. But with big swimbaits, you are coaxing them into biting. Sometimes just being in their space is enough to make them aggressive. But often it’s a move that closes the deal.

“I treat bass like cats,” Newman said. “You take a piece of string and just drag it by a cat and he just watches it. But if it catches and stops and starts or you jerk it real quick, they pounce on it. I think of bass the same way. I’m trying to get that bass that is just a watcher riled up to pounce.”

Newman admits he didn’t always think this way. But decades of watching giant bass follow large swimbaits has given him an invaluable education on bass behavior.

“I used to watch for bass following my swimbait, then I would start trying to make them bite onceI saw them. I would handcuff myself a lot because I would run out of room before I got the bass to commit, and I didn’t realize they were already getting skittish because of their proximity to the boat.”

Now Newman starts with a slow-rolled retrieve and envisions the bass is following about 8-10 cranks into his slow retrieve. That’s when he imparts a 3-step move that he said works almost like clockwork when a bass is following his glide bait.

After 8 to 10 slow reel turns he convinces himself one is following. He then gives his reel two sharp reel turns then pushes his rod to one side and feeds the bait back slack to let it glide off to one side. So you’re slow cranking, then zip-zip, push and give the rod back to the bait to feed slack and watch it glide.

The bass has to turn his head left and right. Then you make him make two quick aggressive turns to maintain his tracking and then the lure fades off like it’s dying. That combination of forcing the bass to make two aggressive moves and then the bait just gliding off away from them is usually more than a big fish can stand.

“Me and my partners only fish one lure at a time because multiple big splashes I think will confuse and draw fish that are following away to the other splash. So when you’re in the back of the boat and you hear the zip-zip sound, you stop what you’re doing and then you feel the boat rock. It’s crazy how many times that works.”

Those that would question the big splash these oversized glide baits produce should fear not. Newman thinks it actually helps the cause.

“I don’t care about the splash at all,” Newman said. “It’s a dinner bell to the bass. They hear the splash and are immediately curious. If I’m casting targets, I want to cast way past them. But that’s only because I want them to have time to see it coming and get agitated before it gets to them.” 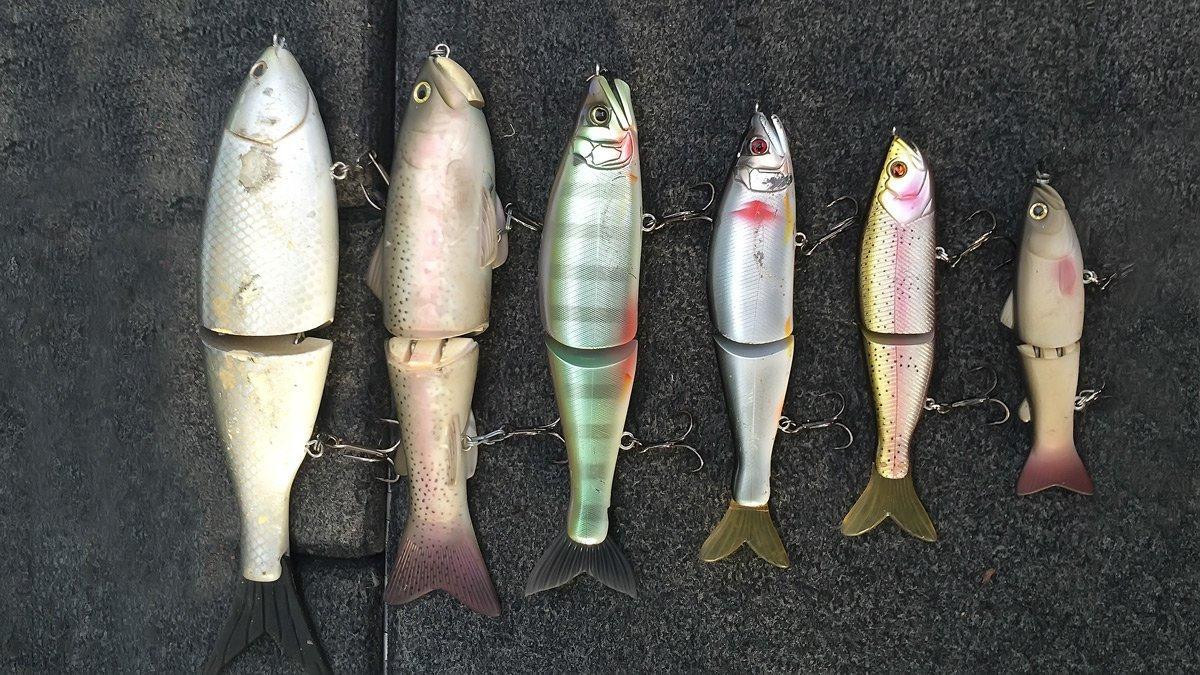 Newman has fished a variety of glide baits. He started throwing a hand-made glide bait made out of soft plastic many years ago. A friend helped him mold a large swimbait body to fit on a hard Castaic swimbait head. He immediately fell in love with the bait, telling his fishing buddies he had a Zara Spook he could work under the surface.

“The River2Sea S-Waver was the first glide bait I remember using that was production ready and caught fish,” Newman said.

Nowadays, Newman uses a lot of different glide baits. But his favorite is the Gan Craft Jointed Claw 230 glide bait. The bait has a good hookup ratio and it’s big enough to draw.

“I think size has a lot to do with drawing power so I never throw little glide baits anymore. I want the biggest ones I can find.”

But he fishes many different baits and colors in an effort to keep the fish guessing and because quite frankly it’s addictive throwing glide baits for giant bass. 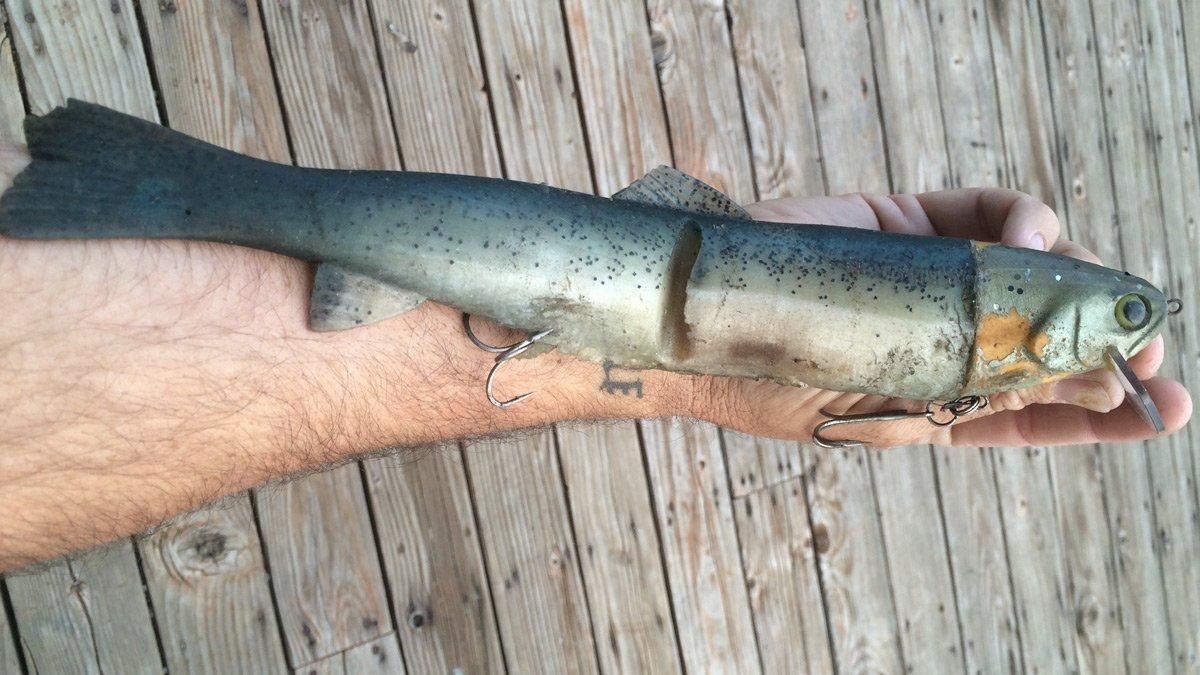 “Back in 1999, I was gluing plastic baits together to try to convert an 8-inch bait into a 12-inch lure with a bigger action,” Newman said. “Greg from Roboworm helped me make some 12-inch bodies with a single joint, and I caught so many fish on that crude bait and had it to myself for a while. I played with musky baits but they were somewhat crude for what I was trying to get the baits to do under the surface. Then I got the Deps Slide Swimmer and the first day I took it to the lake, I got 20 fish on it. It was insane that first year.”

Newman has seen the whole swimbait scene evolve through the years. Now when he goes to the lake, he’s not the only guy slinging big hard swimbaits. Now every guy on the lake has a boat with a single rod on the deck and one giant glide bait. Rain, shine or snow, they are chucking the big baits with reckless abandon.

These days, a large part of his life is dedicated to his iRods, specifically the popularity of his line of swimbait rods. Quite frankly some of these glide baits weigh 4 and 5 ounces. Most rods on the market can’t even begin to handle that sort of weight. So he’s spent a lot of time developing light rods that can handle big baits and bigger fights.

He likes his 805 XL for lobbing the bigger glide baits. It’s an 8-foot rod with a moderate action and a ton of backbone. And he’s a braid purist and a monofilament despiser after having that stretch cost him some big fish. With braid he gets a great hookset, and controls the fight the entire time.

“Eighty percent of it is triggering the strike,” Newman said. “Glide baits excel at forcing the bass to move more than he wants to and react to quick moves by forcing him into quick movements when he’s tracking. But you learn so much about bass behavior with these baits. It has carried over to how I fish all my lures now. I’m constantly thinking that a bass is looking at my lure and now I need to do something to make him want to bite.” 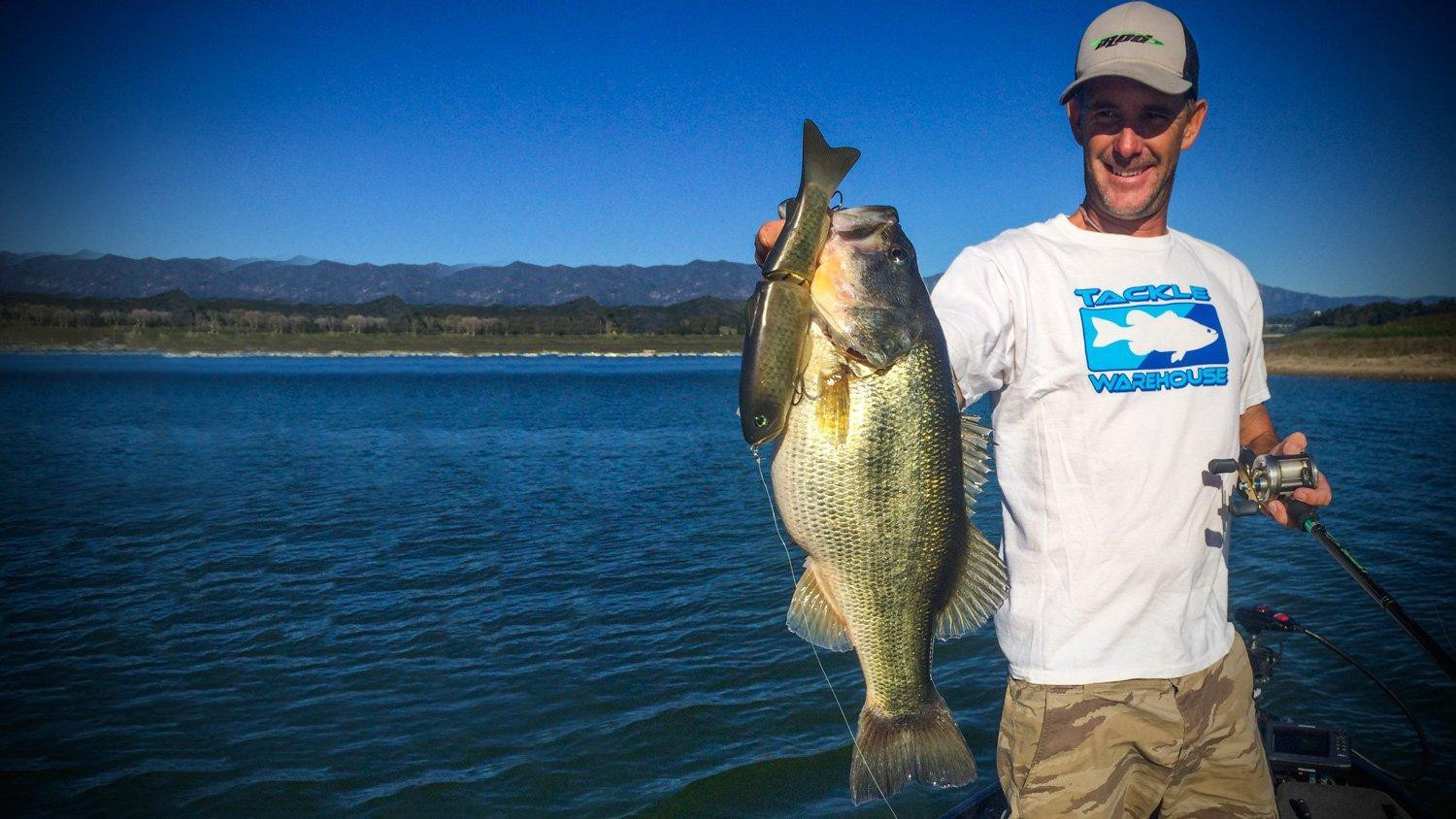