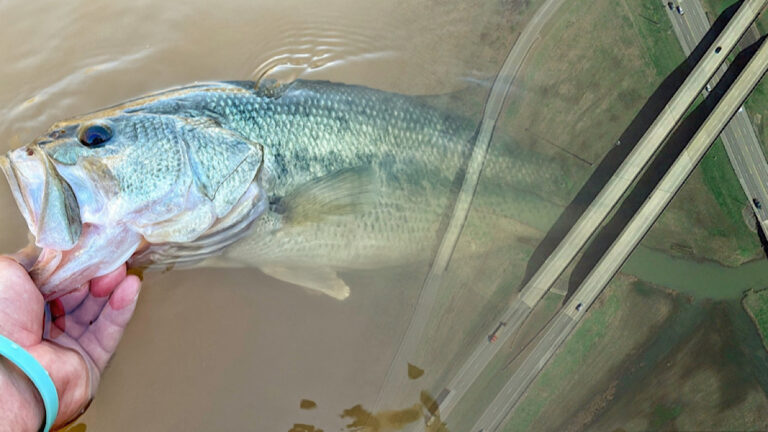 While I don’t necessarily recommend anyone doing that, I do recall one of the things I was the most fond of at the time and that was exploring new fisheries. I was traveling around a lot back then, fishing college and semi-pro tournaments to begin with. Then, I’d dump my boat in whatever water hole I could find later on between covering tournaments, as I transitioned to a career working in the fishing industry.

Regardless of how I got there, I often found myself on new fisheries that I had never seen before. At least, I hadn’t seen ‘em with the naked eye. But what I had done almost every time, is looked at the lake, river or even pond on satellite imagery. Using Google Earth or something similar, I’d spend hours sometimes scouring a fishery before ever putting the boat in. It was an extremely effective way to gain the upper hand on competitors, as well as just have some idea of what I was getting myself into when I was simply fun fishing.

So today, we’re going to look at just a few of the ways you can use this technology to get a bird’s eye view of the fishery you’re headed to next.

Looking at a lake for the first time 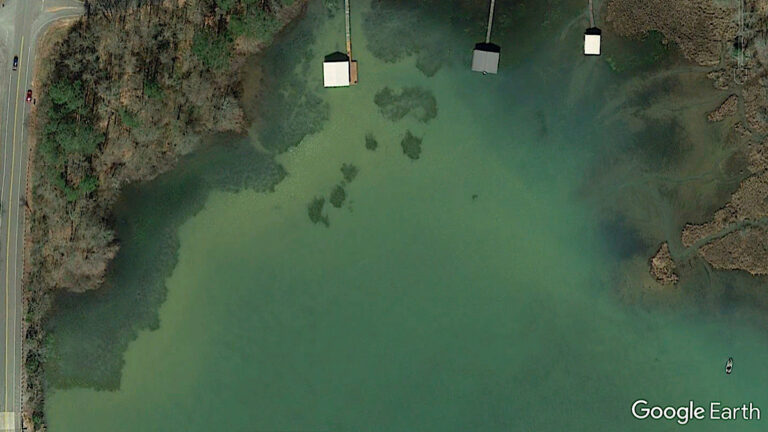 I remember I was covering an Elite Series event on Kentucky Lake several years ago and I had a couple days to go fishing before I had to be wherever I had to be next. I got on Google and started scanning the satellite images of the surrounding area trying to find something worth fishing. I found a little lake that was a pretty good drive away and I set out for it. But what was it about this lake that made me pick it?

Lily pads…dollar lilies, to be exact. I could tell from the satellite imagery that the lake was small but that it was full of vegetation on the top end. We were also in the post-spawn period.To me, that meant frog fishing. I made my way to the lake and had an absolute ball catching some good ones and losing a really good one on a frog. I even made a video about breaking down new water while on that fishing trip and show some of the images I had found of the lake at the time.

Looking at lakes to which you’ve never been or perhaps go to regularly, can help you find all sorts of stuff. By simply looking at satellite images of the lake, river or pond, you can locate docks, bluffs, laydowns, creek channels, vegetation, standing timber, cypress trees, areas that frequently see muddier water and a whole lot more. 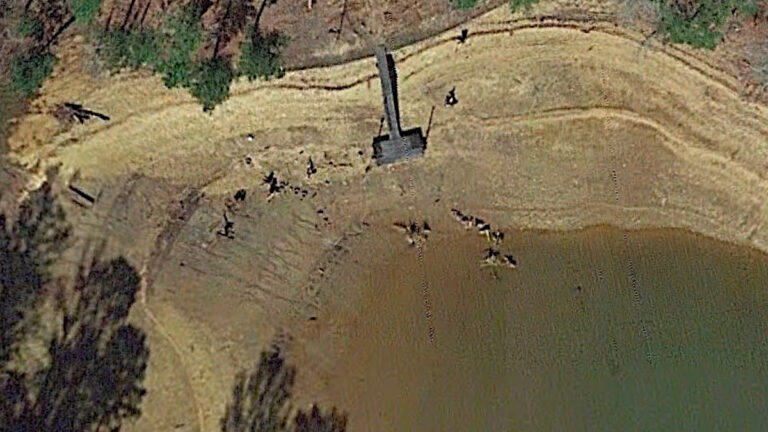 I also really like to use satellite images to look at lakes with winter pools. Some lakes, like Lake Martin for instance that’s close to where I live, have winter pools where the governing organization over the lake will drop the water to help control flooding during the winter months when the rains are often heavier.

If you can find images taken during those months when the water is down, they can be very helpful. You can find brush, rock piles and even other features like points, creek channels and ledges. Being able to see what a lake looks like when the water is down 10 feet is also extremely helpful when learning to navigate it for the first time. It also helps when looking for areas where fish will migrate using channels back into and out of spawning flats.

Sometimes, the most up-to-date images are a few years old. But still, they are very useful with hard contour like rock piles and channels that typically don’t change a whole lot year to year. But even with brush that rots away, don’t discount the older images. Anglers and homeowners typically replenish the same piles year after year. The best thing to do is mark the piles and then go and look at them on the lake to see if they’re really there.

Google Earth Pro actually has an option where you can scan through multiple images of an area, spanning back decades in some cases. This will almost always ensure availability of at least one low-water image if you’re looking at a lake with a winter pool. 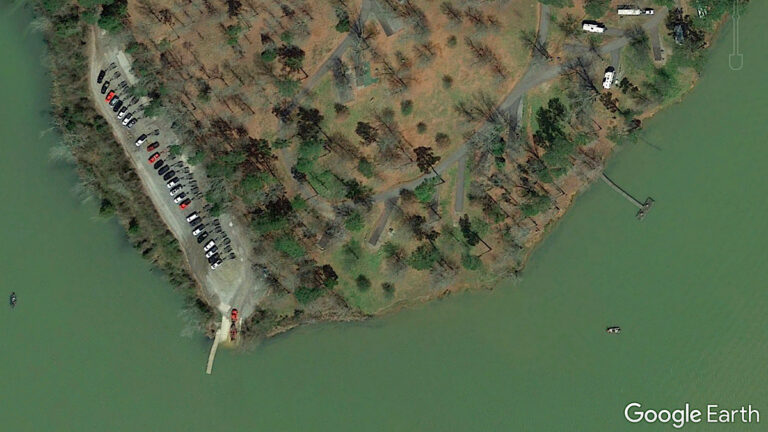 Satellite images are also really helpful when looking for things like boat ramps. If you identify an area of the lake that you want to try, you can scan around pretty quickly using Google Earth or something similar and find a boat ramp. Often times too you’ll also see a small body of water separated from a larger body of water by a causeway. Using traditional topographic paper maps or looking at electronics on your boat even, you won’t necessarily be able to tell how big the opening is that connects the two. With satellite images you can usually tell if there’s an opening big enough to squeeze a boat through, or you may even see a boat back in there on the image and then you’ll know you can get in.

I especially like to use satellite images to research fisheries with no topo lines, whether that’s a particular stretch of a big body of water that simply hasn’t been plotted yet or a small pond or creek I’m thinking about checking out. You can usually tell a lot about how to make your way around or if a small fishery is fishable from the bank simply by looking at it from the vantage point provided by a satellite.

There are loads of advantages to doing a little research of a body of water using satellite images before heading out on the water. Just remember, the images are rarely current. So things like mud-lines, water levels and vegetation may not look exactly the same when you get there. But the advantages greatly outweigh any pitfalls in my opinion and being able to scout before a trip gives you a whole new outlet to scratch that fishing itch in the meantime.