The Strike King 10XD created a huge buzz upon its release and has continued to capture the attention of anglers across the country. This deep-diving crankbait is responsible for several top-level tournament wins and has helped anglers dredge depths previously unheard of.

According to 2016 College BASS champion John Garrett, there’s a key modification that will help you get even more from this popular lure: Silence its internal rattles. 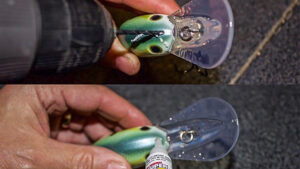 Due to its size and loud rattling sound, schools of offshore bass can quickly become conditioned to the Strike King 10XD. A silent model is not currently available, so Garrett makes a few of his 10XDs silent with a drill, some superglue and a dab of epoxy.

“The process is really simple,” Garrett said. “Start with drilling a hole on top of the bill where it meets the body of the bait. If you look from underneath the lure, you’ll see the chamber in which the rattle sits. Squirt superglue into that chamber to lock the rattle in place. Let the glue dry for two or three minutes and add a small amount of epoxy to cover your hole and make the bait watertight.

“The second rattle is in the weight-transfer system of the bait. Here, I make a small hole on the underside of the lure and superglue the metal BB in place with the bill facing downward. I just hang the bait by its back hook and let the glue dry, which keeps the rattle in the front of the bait. Then I’ll epoxy the hole so the lure stays watertight.”

Ensure the rattle is glued at the bottom of the weight-transfer system with the bill facing downward, where you drill your hole; this way there won’t be any issues with the castability of the lure. This will preserve the excellent castability of this nearly 2-ounce lure.

Garrett’s experience the past two summers on the infamous ledges of Kentucky Lake have made him a big believer in this modification.

?“More than anything, it’s something the deep fish haven’t seen,” Garrett said. “If I know the fish are offshore, I’ll have one rod with a 10XD and another identical setup with a silent 10XD. As KVD says, it’s essential to have both a silent and a rattling version of a crankbait to show to a school of fish.” 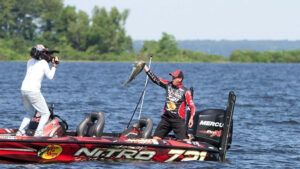 Legendary Elite Series pro Kevin VanDam has long preached the importance of throwing both a rattling and a silent Strike King 5XD or 6XD to a school of fish before leaving.  He “never leaves a school” before offering the bass both options as they respond differently to the baits depending on the conditions and their mood.

“The five minutes this process takes proved its worth to me this summer,” Garrett said. “On Kentucky Lake I could pull up to a community hole, where the bass had been pounded for weeks, throw my silent 10XD to them and usually I’d fire up a few fish. “

Garrett’s 10XD tips are one example of a simple, but hugely effective, lure modification you can do in your garage that will result in more bass on the water.