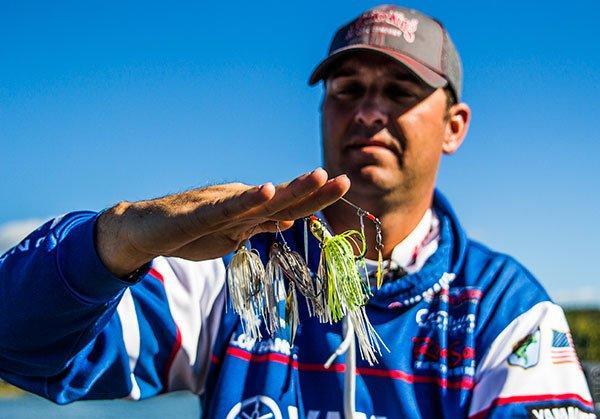 As the fall shad migration reaches full-swing, spinnerbait fishing gives you an excellent chance of catching big bass. With so many lures and techniques flooding the bass fishing world, it’s easy to overlook this classic lure in favor of trendier offerings, but keeping one handy can increase both the quantity and quality of your catch.

Elite Series pro Todd Faircloth turns to a spinnerbait for a large portion of his fall fishing. While other anglers cover water with noisy reaction baits, he’s able to make the most of shad-oriented bass with a more old school approach.

According to Faircloth, there are five things you can do in order to become a better fall spinnerbait angler.

If you can find a concentration of baitfish in the fall, it’s a safe bet bass will be nearby. For this reason, Faircloth makes a concerted effort to search for areas shad will use as natural stopping points on their fall migration routes.

With a seemingly infinite number of color and blade combinations, selecting the correct spinnerbait to match the current conditions can quickly become overwhelming. Faircloth, however, manages to keep his selection process relatively simple by trusting in three specific spinnerbaits throughout the fall.

Experiment with your retrieve speed and cadence

Faircloth pays close attention to his retrieve cadence when he gets a bite so he can duplicate it on subsequent casts.

While you can certainly catch bass by chunking and winding a spinnerbait, Faircloth suggests catering your retrieve cadence and speed to the conditions. Along with his “standard” retrieve, he experiments with two additional retrieves until the bass “tell” him what they want.

Regardless of his retrieve speed or cadence, Faircloth believes that attention to detail is paramount. The bass’ preference can change throughout the day in accordance to environmental variables, so he stresses the importance of experimentation. If he experiences a lull in the action, he begins changing his retrieves until the bites start picking up.

“To be a great spinnerbait angler, you have to pay close attention,” Faircloth said. “When you get a bite, you need to understand that the bass bit for a reason and make an effort to duplicate exactly what you were doing.”

In order to get the most out of your spinnerbait fishing, it’s important to pay close attention to your surrounding environment. Both water temperature and clarity play primary roles in Faircloth’s decision to throw a spinnerbait.

“When the water temperature hits the low-70s, I’m going to start throwing a spinnerbait a lot more than usual,” Faircloth said. “The bite is at its best in the 60-degree range and it slowly begins to fade when the water dips into the 50s and the bass become more lethargic.”

In clear water, Faircloth prefers sunny conditions due to the extra flash the blades will emit. When the sun reflects off of silver bladesâ€”his primary blade color throughout the fallâ€”bass mistake them for shad and will cover several feet of water in order to attack it. Because spinnerbait fishing in dirty water is much more vibration-oriented, cloudy weather is preferable as the bass won’t position as tightly to cover and are more apt to chase forage

When many of us fish with spinnerbaits, we’re hard-wired to target visible shallow cover. It’s a load of fun when it works out, but what happens when the fish aren’t there? Instead of giving up on the big fish possibilities of a spinnerbait, Faircloth heads to open water and targets two specific areas.

Although spinnerbaits are overlooked by many, don’t lose faith in them. The fall is a great time to build confidence in them and more than likely, you’ll be surprised by the quality of fish they produce.

How often do you throw a spinnerbait in the fall? When do you think they out-produce other reaction baits?