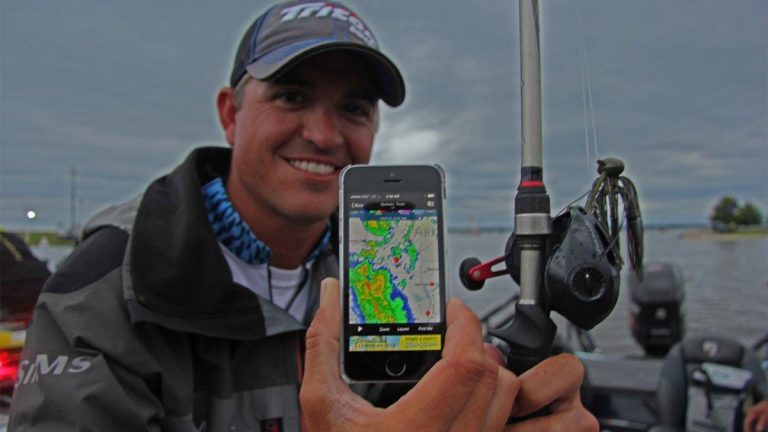 Reigning Bassmaster Classic champion Casey Ashley is a guitar playin’ singer of country music songs, who loves to put his toes in the sand and soak up the sun—but that’s not gonna happen this weekend at the Toyota Texas Bass Classic.

Instead, Ashley began Day two with half-cup of “black but weak” coffee, as he described it, and an in-depth study of his smartphone’s weather radar at the cozy cabin he’s sharing with Terry “Big Show” Scroggins.

Ashley was still looking at the radar just prior to strapping down a Quantum Speed Freak reel to his boat’s front deck moments before takeoff. And while the youthful Classic champ had never been to Lake Fork prior to this week, he’s fast learned the huge numbers of fat bass this place is famous for prefer sunshine too.

“These fish are post-spawn and they’re living out there in 15 to 40 feet of water,” said Ashley, who weighed 26 pounds yesterday to sit in 10th place after day one. “When there’s sunshine, they tend stay on one specific piece of structure and eat, but this rain and heavy cloud cover seems to cause them to roam and make them harder to catch.”

Rarely is there a weather delay in professional bass fishing and while day two launch was only cloudy with spitting rain—it was the many greens, yellows and orange colors barely west of Lake Fork on Ashley’s radar that caused TTBC officials to cancel concerts and other Sunday festivities just after the pros began their fishing day.

“I don’t study radar on my phone while I’m competing and when it’s as dark and cloudy as it is today, you can’t see what’s coming at you,” Ashley said.

He didn’t know what was coming at him last month during a Bassmaster Southern Open on the Alabama River, but the lighting bolt that struck nearby left a lasting impression.

“There were very few storms that day, and that was the only lightning strike around me all day, but I’m tellin’ you it wasn’t 50 yards from me where it hit on the shoreline,” said Ashley, obviously still scarred by its memory.

Hopefully, the only lasting impression left on him today will be another large limit of bass.

“I weighed a limit of 5-pounders yesterday,” Ashley said. “They were all in about 21 feet of water, it’s a great spot but I don’t think there’s anything much bigger than 5 pounds living there. And it takes more than that to do well here. If nothing else, this deep structure fishing on Lake Fork is good practice for all the ledge fishing we’ll be doing at BassFest on Kentucky Lake in a few days.”