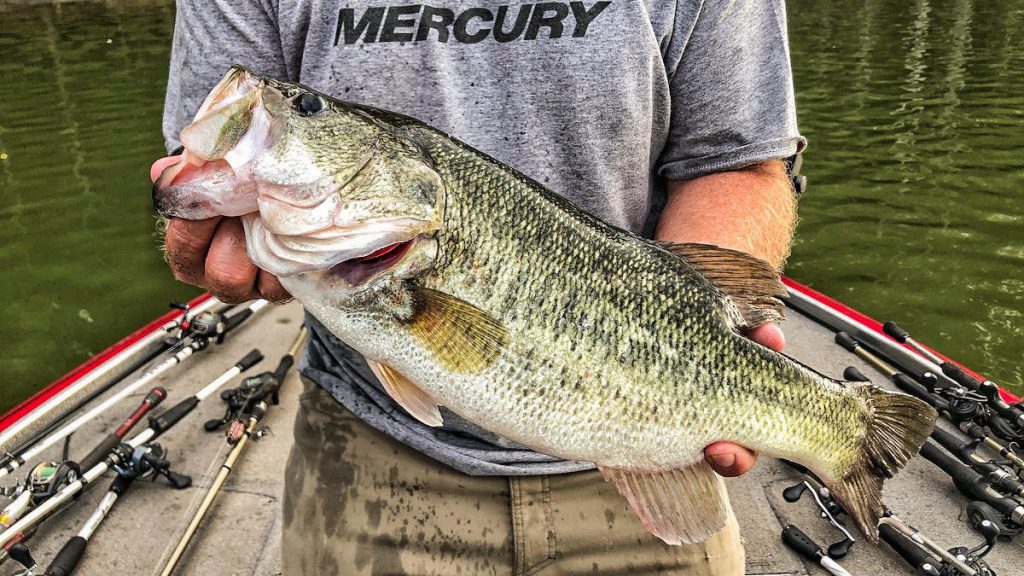 It’s pretty tough trying to come up with different stuff to talk about in bass fishing. And I don’t mean difficult in the grand scheme of things, as life could be much worse. But I mean difficult like trying to tell the difference between the “eggshell” and “off-white” paint swatches your wife brought home. So it’s still difficult. Just in a different way.

A recent brainstorming session got me to thinking about some of the weird little tricks that my dad has taught me over the years. Stuff we don’t use all the time, but when we do use it, it’s extremely effective and helpful.

Several of these little tweaks actually involve treble hooks. If you stick with me through this piece, I really think you’ll catch some more fish this year. So let’s dive in. 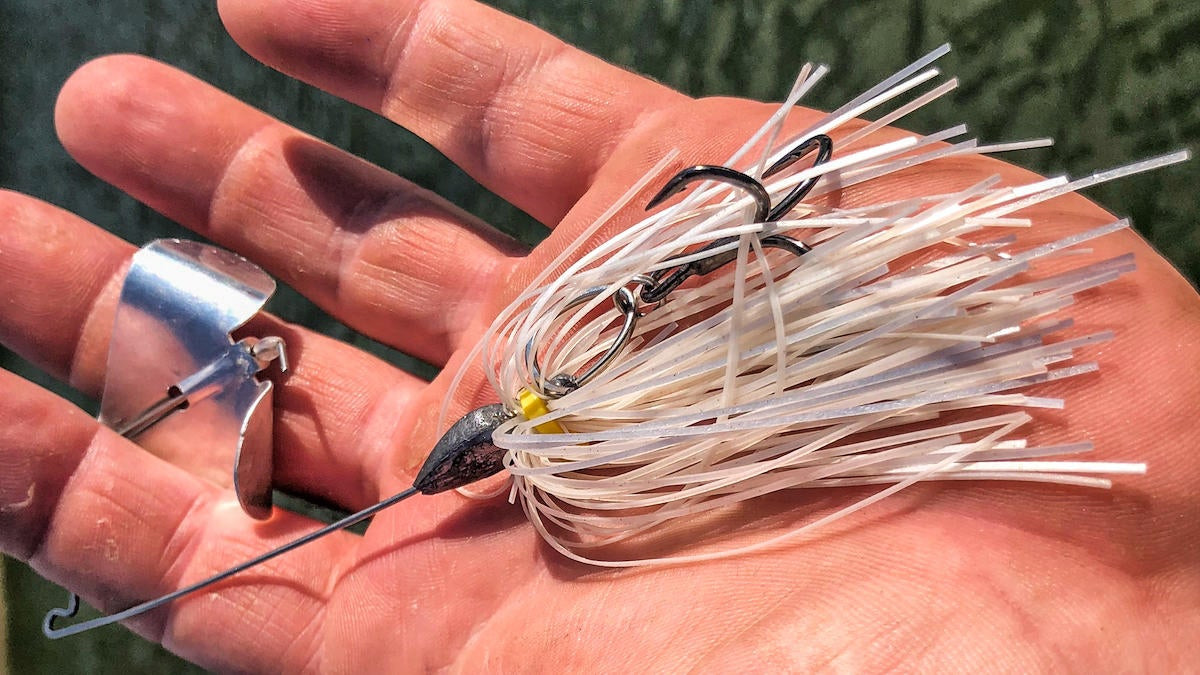 A few years ago, dad was missing a lot of fish on a buzzbait. The fish would short-strike the bait, barely miss the hook or at times even get skin-hooked but then come off during the fight. To remedy that, he cut the hook off of his buzzbait and rolled the shaft over on itself to create an eye. Then he added a big split ring and an oversized treble hook.

While this limits some of the weedlessness of the lure, it also nearly guarantees a hook up if a fish rolls on the bait. And not just a hookup but a solid hookup. Dozens of times since we’ve started fishing it this way, we’ll get a fish to the boat and its lips will actually be pinned shut.

Orienting the treble hook with one prong straight up and the other two down but more out to the sides will help the bait come through cover a little better. The skirt kind of acts as a low-grade weed guard all around the hook and actually allows you to fish the bait through some thinner cover like the edges of water willow where the grass is sparser.

Having a hinged hook like this also aides in converting hookups to catches. The lack of rigidity takes away a lot of the leverage a fish has when it comes up to try to throw the bait. Instead, the weight of the bait just flops around loosely. 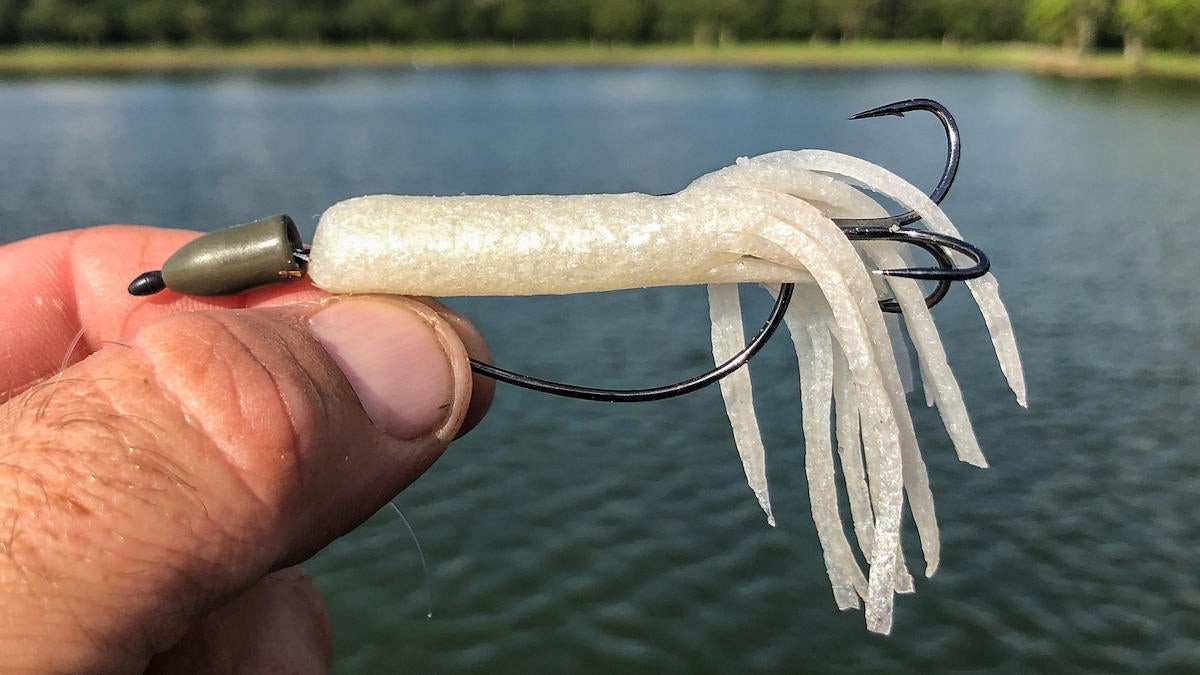 Now here’s one weird way to use a treble hook that will admittedly limit the places you can present the bait even more so than the buzzbait. But, adding a treble hook as a sort of trailer hook or stinger hook to a tube when fishing open water with a clean bottom will make it nearly impossible to miss a fish. That being said, you also have to be careful at times.

I’ve never used this on northern smallmouth, but have to assume there would be some situations where it would work wonders. We’ve used it instead to bed fish. And that’s why I said you’ve got to be careful.

The first time we tried this, we were in a tournament and I had a 3-pounder driving me nuts. It picked my tube up by the tentacles and toted it out of the bed a half dozen times but never did make it all the way to the hook point. Out of pure frustration, we added a treble hook to the EWG hook that was in the tube like you would a trailer hook to a spinnerbait or buzzbait. The next time the fish smacked down on it, his lips were pinned shut and he was headed to weigh-in. Worked like a charm.

But I’ve also had this go wrong before. I had a bass behaving the same way in a tournament once in college and tried the treble hook trick. The fished picked the bait up, turned to tote it out of the bed and when I set the hook and got the fish to the boat, I realized I had hooked it outside the mouth, which is obviously against the rules while sight fishing.

While this rule was put into place to prevent anglers from snagging fish off of beds, it was a mere technicality that tripped me up that day. The fish was actively biting my bait and I had actually hooked the fish in the lip. But because the hook point entered from the outside of the fish’s lip, I had technically hooked it outside the mouth and had to throw it back. It wouldn’t bite again and that’s my cautionary tale about using a treble hook with a tube, for sight fishing at least. I want to make it crystal clear that we do not condone any snagging of the fish, whatsoever. 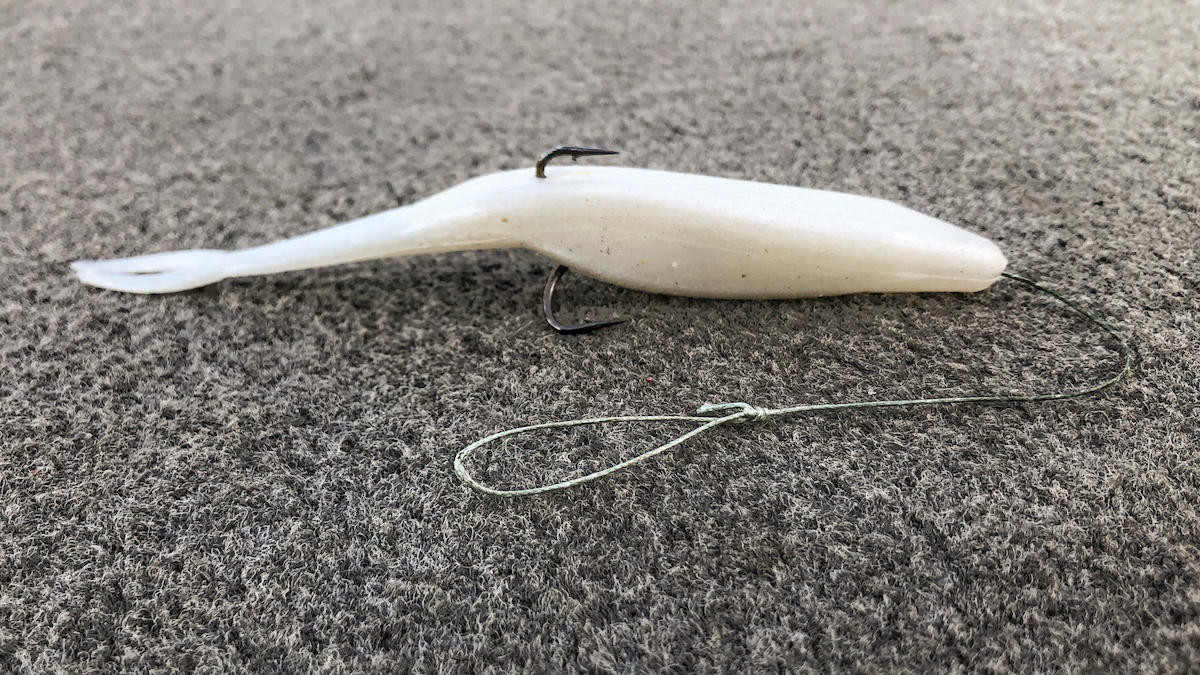 Now this one I’ve seen other people talk about before, but it’s another weird way to use a treble hook and we do it a little different so it’s worth noting. We’ll take a No. 4 treble hook, tie a 12- to 15-inch leader line to it and then run that line up through the nose of the bait from the slit in the belly.

We’ll orient the treble hook so that the eye will lay flat against the belly of the bait and have two hook points off to each side while the third hook point secures the treble to the bait by going up and through the tail end of the body of the bait. We’ll actually build several of these rigs at the time so the next one will be ready to tie on when one inevitably tears up.

There’s a reason we make these little pre-rigs instead of just running the line through the nose of the bait and then tying a treble hook on in the moment. We like to use a soldering iron or super glue to close the belly of the bait around the line. This helps the action of the bait and keeps the rigs from tearing up as quickly.

Now using a treble hook this way is again something that we do for short-striking fish or fish that are sucking the bait in and blowing it back out before we can set the hook. But what we’ve also found is that moving the weight of the hook to the tail end of the bait actually makes the bait walk a little better and gives it the ability to coast backwards into a trailing fish’s face, sort of like using a nail weight on a floating worm does.

Since the rigs are a little time consuming to put together, we don’t fish a Fluke this way often. This is something we primarily do when fishing for big bass that are cruising the banks before and after the spawn. It’s a interactive deal where we’ll typically either see the fish before the cast or draw the fish out of a piece of cover and see it on its approach to the bait.

I still remember the first fish dad and I ever caught on this rig. It was a 5-pounder and part of a 19-pound bag we had on Lake Martin some 20 years ago now. I can close my eyes and see the fish as it just materialized from nowhere and stalked the bait.

Meanwhile both our hearts were pounding out of our chests and the fish was getting closer and closer to the boat, where we were doing our best not to alert our prey. After what seemed like two dozen twitches but what was in reality only four or five, the bass had closed the distance and we watched from 20 feet away as she flared her gills and engulfed the bait. The treble hook pinned her mouth shut just like dad had hoped it would and after a tough battle we had her in the boat.

You just don’t forget stuff like that. And in all likelihood, it might have turned out much less satisfying had he not found a weird way to use a treble hook.