Article and photos by Shaye Baker

Imagine chasing your dream 2,357 miles away from home at the ripe old age of 23. That’s exactly what National Guard pro Justin Lucas did a couple short years ago. He packed up and headed east, leaving his home of Folsom, Calif. for the Mecca of all bass fishing, Guntersville, Ala. One thing Lucas didn’t leave behind, however, was his swimbait box.

California is known for big swimbaits like Huddlestons and Triple Trouts, but a swimbait of the hollow belly variety is what Lucas has found particular success with here in Alabama. Earlier this summer, he nearly won the EverStart Series event held on his newly claimed home lake while dropping two bags averaging more than 30 pounds on the scales on days one and three, all on a Berkley Hollow Belly swimbait.

There are still suspended fish eating a Hollow Belly on Lake Guntersville and around the country. After the spawn winds down, fish move to their summer homes and often suspend while feeding on shad that are relating to the thermocline. These fish are prime candidates for a single swimbait. But as anyone knows, catching suspended fish isn’t the easiest task.

“The most important thing to remember when you are throwing a swimbait is that a bass’s eyes are on top of its head,” Lucas said. “So if your swimbait is below where the fish are in the water column, you’re not going to catch them. You use a swimbait to catch suspended fish, and suspended fish don’t eat down, they eat up.”

Since a swimbait doesn’t make any noise and gives off very little vibration, it makes sense that a bass’s primary tool for stalking and ambushing a swimbait is its sense of sight.

“I want my bait as close to the fish as possible without being below them, so if the fish are 15 feet deep, I try to keep my bait in 12 or 13 feet,” Lucas said.

Clear water is a must when throwing a Hollow Belly style swimbait. Lucas looks to employ the technique only if he has at least 2 feet of visibility. The clearer the better with the exception of gin clear water which makes the fish too finicky. With a bass’s sight being so important, it makes since that any improvement in visibility helps.

That is why it is also important to have sunny skies. Suspended fish can still be caught on a swimbait in overcast conditions, but the numbers drastically improve the brighter the day. The only thing that does cut down on visibility a bit but still seems to help the bite is wind.

“A steady breeze always seems to be best,” said Lucas. “You don’t want a lot of wind but a constant 5 mph wind always helps.”

Lucas uses anywhere from 3/8 to a 3/4-ounce jighead with a 4/0 or 5/0 hook and a 5-inch Berkley Hollow Belly. He has a friend pour his jigheads, but he admits there are several on the market that are just as good, Buckeye J-Will swimbait heads being his favorite. Lucas uses his Lowrance HDS electronics to find schools of fish. Once he locates an area with multiple fish and determines the depth that most are suspended, he’ll pick the appropriate weight jighead for the task.

Counting down your swimbait is a vital part of making the most of your cast. Instead of allowing the bait to pendulum down to the appropriate depth throughout the cast, Lucas will count the bait down before he starts his retrieve. The rate of fall to be used for the countdown depends on the size of the jighead. 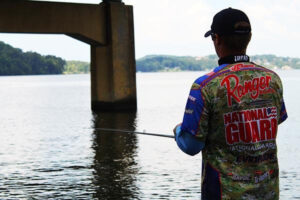 When looking for where to fish, it’s really all about graphing as much as possible. Fish may be in an area one year and vacate it the next. They may hold on a point outside of a spawning area in early summer or on a deep hump or ledge. Bridge pilings offer great vertical cover and hold suspended fish year round. It’s all about using your electronics to locate where the fish are at the time of year that you are fishing. But Lucas does have a suggestion on how to find the big ones.

“If you want to catch the real big ones, I don’t look for huge schools of fish,” said Lucas. “I look for just a few arches on the graph. Instead of fifty, I look for 8 or 9 bass. For the most part, the bigger fish stay more secluded and avoid the real big schools like a 3-or-4-pounder frequents. You don’t get nearly as many bites, but when you do they are good ones.”

The retrieve should be kept simple. A slow, steady retrieve on a 6.4:1 geared reel gives the bait the perfect amount of action while keeping it in the strike zone for the optimal amount of time. Most strikes come during an intermediate pause that Lucas suggests you make 3 or 4 times each cast

“A swimbait is a very attractive bait. It has a lot of action and looks very natural, so bass are going to be curious right off the bat and they are going to follow it,” said Lucas. “You have to always imagine that there is a fish behind your bait and you have to pop your rod to give it that half a second of different action.”

Lucas only adjusts his line size based on two factors: water clarity and the size of fish he is targeting. He uses 12- to 17-pound Berkley 100 Percent Fluorocarbon for all applications. Naturally the clearer the water and the smaller the fish, the lighter the line. However on a lake like Guntersville where he is targeting 4- to 6-pound fish in slightly stained water, he’ll use 17-pound test.

“I always throw a 6.4:1 Abu Garcia Revo SX on a Powell 765. The 765 is a 7-foot, 6-inch rod with a parabolic action,” said Lucas. “The parabolic action is really important for making long casts and still hooking fish.”

“If it’s not perfect as soon as I put it on the hook, I take it off and put on another one,” said Lucas. “You typically don’t get a ton of bites on a swimbait so you want to make sure that it swimming true every time.”

Lucas always adds a drop of super glue on the collar behind the head before sliding the swimbait up onto the hook. Once you’ve tweaked your swimbait, this drop of glue will hold it in place, typically through multiple fish.

The biggest bag of Lucas’s life came on a single swimbait, weighing in at 31-10, so it’s safe to say he knows a thing or two about the technique. Once you locate a school of suspended fish try putting these tips to good use. Hopefully they’ll help you catch more and bigger fish. 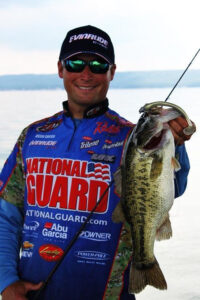