The quickest way to a bass’s heart is through his mouth. Okay that might be a stretch, but one thing is for sure, when a bass has feeding on the brain he gets predictable and patternable. Fall brings a binge impulse for the bass, largely because forage has spent the spring and summer spawning and growing and they gang up in massive schools. The grouping of the forage in late summer is like a magnet drawing bass out of their deep summer haunts and into the creeks.

James Niggemeyer travels the country fishing Elite Series events but has also spent most falls chasing bass on Texas fisheries like Lake Fork, Sam Rayburn and Cedar Creek. He loves fall fishing for one reason â€“ he can just pick up a bait like a Red Eye Shad and go!

“I just love the change of pace that comes when you can pick up a lipless bait in the late summer and fall when the bass are moving with the bait and just cover water,” Niggemeyer said. “It’s such a good relief after you’ve been out there fishing deep, throwing marker buoys and fishing ledges to come shallow and just pick a rod and burn it up. I love this time of year. I just grab a few rods with spinnerbaits, square bills, lipless baits and topwaters and run and gun.”

“I’ve caught bass fishing lipless baits from the end of the summer all the way up to prespawn the next year,” he said. “It’s so effective at just covering water. You can move fast, target schooling fish and follow them around as they migrate to the backs of the creeks in fall and then back out again going into winter. It’s effective out on creek channels and in inches of water in the backs of bays. In fact I’m always surprised just how shallow a bass will get and react to a lipless bait.”

Niggemeyer starts seeking out bass about halfway back into the major creeks, especially ones that have feeder creeks coming out of the backs of them. He’s found more success going up into the bays than starting way out in the mouth.

“I used to fish all the creeks from the mouth to the back,” he said. “Now I’ve found that most of the time I’m really finding and targeting those shad chasing bass in the back third of most major creeks.”

The presence of structural elements like secondary points, channel swings, ditches running through major flats, even road beds or humps toward the backs of the creeks can be good. Fort Gibson was a good example for him recently. He finished 2 ounces out of the top 12 cut and was on the right pattern to win, but came up one good bite short of making the final day cut. But what he found in that event was the bass were already following the shad in the back third of some of the major creeks and he was able to pinpoint them and catch them around those structural elements with cover nearby.

Another thing he likes to see in a quality area is above average shad. A lot of the shad in late summer and fall can be small. Waves of 1 inch and 2 inch shad undulating through pockets and coves. Then he’ll round a corner and find schools of bigger 3 and 4 inch shad or maybe some active gizzards in the area and he starts catching bass and often better quality bass.

“I always like the presence of bait and a defined creek channel around,” he said. “As you get to the back third of a creek it will be flatter and more silted in but those hard edges of a channel can attract better bait and better bass. The change in depth may only be a few inches but the bottom composition may change drastically. That hard edge means a lot to the bait and the bass. And if you have the presence of grass or wood mixed in, you’re going to find the bass.”

Once he’s found a promising area, he’ll take the deck with a 7-foot, 4-inch St. Croix Mojo Crankster rod with 12 to 14-pound Gamma Fluorocarbon and a 6.4:1 Ardent Edge reel. He likes to cover water quickly at first with straight medium to fast retrieve. As he moves around in the area and targets cover like standing timber, stumps, dock posts and vegetation he’ll add a lift and drop retrieve with his Red Eye Shad. And when he reaches the backs of the creek and coves, he’ll burn the bait over shallow inches of water to entice those extremely shallow fish.

“Those three retrieves will cover all the bases for me with lipless crankbaits,” Niggemeyer said. “Of course I will snatch it out of grass when fishing around vegetation, but for the most part it’s a steady retrieve most of the time, followed by a lift and drop retrieve. That Red Eye Shad falls perfectly straight with a nice shimmy. I can use that to my advantage. So I can wind the bait around the cover then as I get next to something vertical like a dock post or stump, just kill it and let it fall and catch a lot of ambushing bass that way.

“I love throwing it around docks too. So often it’s an overlooked technique in the fall. You can hear the bait all the way back to the boat echoing under the dock and you’ll actually hear the rattle stop before you feel the strike a lot of the time.”

Niggemeyer keeps his color selection very simple. Chrome Sexy Shad has become his go-to color but he also really likes gold when he’s fishing tannic waters like he often finds in Texas. If it’s overcast, or the water is a little dirty, regular Sexy Shad with that more white side can be dynamite. He keeps other colors on hand but really feels like with chrome, gold and white he can cover all his shad-mimicking bases.

Most of the time he’s throwing a 1/2 ounce in the fall. He can cover water, throw it far and still pull it through cover easily. Some of the time when the bass get dirt shallow in inches of water he’ll burn a 1/4 ounce Red Eye. He hardly ever employs the 3/4 ounce model in the fall as he’s wanting to fish more horizontally fast and cover water as fast as possible to find active feeders.

So as the shad move into the creeks on your local lakes, start moving with them with a fast moving bait like a lipless crankbait. Work from 1/2 way in to the back to the back of the creek fishing pockets, points, flats with defined channels and other structure, especially those with cover like grass, wood and manmade docks.

As the water cools this pattern actually gets stronger and according to Niggemeyer, the bass get a lot better.

“I love finding this pattern early in late August and September, but some of my best days with a lipless crankbait have come in November,” Niggemeyer said. “It’s just a fun refreshing way to catch them and it seems like the you get more dialed in to where they are headed and you often just keep at it until you stumble on a good group of bass that are the right ones. I love catching big bass when they are so aggressive like this and the fall lipless bite is a great time in fishing.” 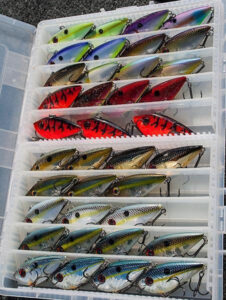