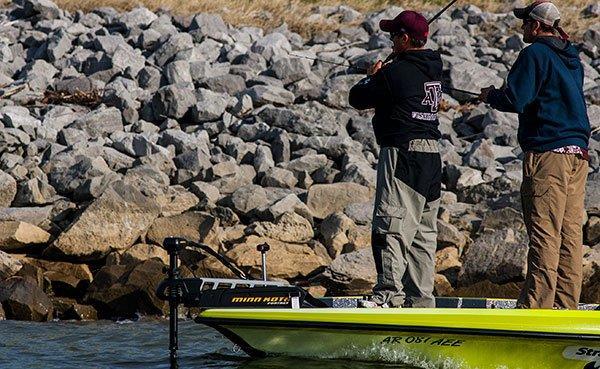 There’s no question about itâ€”fishing rivers in the fall can be quite challenging. Gone are the simple spring fishing days of multiple kickers in the livewell and plenty of 2-pounders to boot. By the time autumn rolls around, bass are skittish, leaving many fishermen scratching their heads. Rest easy, fellow anglersâ€”cranking rip rap is a great way to combat this age-old conundrum.

Forrest Wood Cup champion Jacob Wheeler has spent his entire life perfecting his fishing skills in river systems throughout the Midwest. He recently shared some of his favorite tactics and crankbaits for tackling fall’s notoriously tough river fishing.

More: How did Jacob win the FWC?

The difficulty of fall river fishing

In order to increase your river fishing success in the fall, it is necessary to understand the correlating biological aspects. As the unforgiving heat of summer fades and the days begin to shorten,  shad instinctively embark on annual migrations towards shallow water. Many of the country’s river systems lack adequate backwaters and feeder creeks.  Without an abundance of creeks to draw migrating shad, effectively locating large concentrations of bait can prove to be quite a challenge.

In addition to the lack of feeder creeks, many river systems experience dramatic drawdowns throughout the fall months. With the dropping water, both shad and bass have a very limited amount of cover and structure.

“Low water levels can make fall river fishing even more difficult,” said Wheeler. “Bass can’t set up on their accustomed cover, and it takes a lot of the visual element out of fishing. That can be tough to overcome at times.”

Another difficulty of fall river fishing can be attributed to the fishing pressure that the bass have been exposed to throughout the year. Bass are smart creatures and become weary of the traditional baits that we use to fool them.

“A lot of the bass that we pursue during the fall have been caught once, maybe even twice before,” Wheeler said. “Every weekend these bass get bombarded with worms, jigs and crankbaits, and by this time of year, they are able to tell the difference between the real deal and something artificial.”

With the days getting shorter, it is important to maximize your fishing time, and keying in on specific areas will produce more out of your limited time on the water. Due to the lack of migration options for shad and a decrease in river current, “pinch-points” within the river are essential to fall fishing success. If you can locate an area where the river becomes increasingly narrow, a solid mixture of shad and bass are sure to be in the area.

“I have caught a ton of fish over the years locating these key pinch-points,” Wheeler said. “The corners of bridges are solid starting points, as they are primary travel routes for shad, bottlenecking the fish into a smaller, more confined area. If bridges are few-and-far between in your area, spend some time locating shallow sandbars and small current eddies around rip rap.”

When Wheeler locates rip rap on the river, he focuses solely on any irregularities in the rip rap. Irregularities are considered to be anything that is different from the surrounding rip rapâ€”such as transition areas leading from small-to-big rocks or vice versa, grass patches or anything that may block even the smallest amount of current.

“David Fritts won the FLW Tour Guntersville event in 2009 by focusing on very small, seemingly unimportant irregularities on rip rap banks,” Wheeler said. “He caught the majority of his fish slamming his crankbait into just one rock. If his cast missed by just an inch, he wouldn’t get bit. That is the epitome of fall river fishing.”

While Wheeler occasionally uses his electronics to locate key areas in rip rap banks, expensive electronics are not a necessity. Obvious areas that many anglers overlook include outside river bends, steep channel-swing sections in the bank and large, visible boulders that may block current.

Deep crankbaits definitely have their place when fishing rip rap in the fall, but in the river systems where fish tend to stay shallower throughout the fall, Wheeler opts for a more shallow, power fishing-friendly approach.

“When I’m cranking river rip rap, I only target fish in the 3- to 5-foot range,” Wheeler said. “I feel like I can get a lot more reaction bites doing so. I like to slam my crankbait against shallow rocks as hard as I can, and then pause it for about a second. Most of the time they will hammer it while it’s sitting still.”

Wheeler heavily stresses the importance of finding the proper cadence when power fishing rip rap banks. The fish’s preference can change daily, so it is essential to experiment throughout the day until you discover an effective way to draw strikes.

“Most of the time, I will burn my crankbait through the area, stopping it every time it collides with something,” Wheeler said. “Even though that’s where my confidence is, I still make it a point to periodically change my retrieve. Being very mindful of your cadence can be the difference between a good day and an awesome day.”

Perhaps the most important element to Wheeler’s fall rip rap success is his castingâ€”not necessarily making circus casts into hard-to-reach areas, but paying close attention to the location of his bites. As David Fritts demonstrated in the 2009 Guntersville event, rip rap fish can get very keyed-in on specific pieces of cover. When Wheeler forces a reaction strike from a bass, his first objective is to see exactly where the fish bit. If the fish bit in front of a small grass patch for instance, Wheeler will make several repeated casts to that particular grass bed, while searching for additional areas to duplicate the pattern. 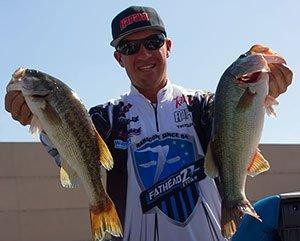 “Don’t be discouraged if you don’t catch a fish in your first few casts,” Wheeler said. “I’ve caught some really big fish after 30 casts to the same exact area. You just have to pay attention to when and how you’re getting bites. Did you stop it? Deflect it? Run it up a little shallower? You have to figure out why it bit and why it was in that specific location.”

Targeting gnarly rocks when fishing river rip rap is a great way to mangle your line in a hurry. After every five casts, it is important to inspect your line for any nicks, abrasions or rough spots. In the days of $10, $15 and sometimes $20 crankbaits, proper line care is a must.

“You have to check your line constantly when you’re fishing like this,” Wheeler said. “I’ve recently upsized to 12- or 14-pound line because the rocks can be really nasty. When I’m targeting such shallow depths, I don’t really care what my line diameter isâ€”as long as my line holds up. Whatever you do, don’t be lazy about re-tying.”

Rod angle is an often-overlooked element to rip rap fishing. Chunking and winding will work at times, but again, successful river rip rap fishing in the fall is a very detail-oriented technique.

“I like to hold my rod tip down and to the outside of the boat as much as possible,” Wheeler said. “I don’t like to simply skim my crankbait across the top of the rocks. I want my rod tip down in order to feel everything that my bait is doing. On occasion, I’ll hold my rod tip up in extremely shallow situations, but down and to-the-outside is definitely my preference.”

Not only does the proper rod angle let you feel the bait betterâ€”it also helps control the depth of your crankbait. While a Rapala DT Flat 3 will run approximately 2 feet deep with a high rod tip, the same bait will run 4-feet deep with a low rod tip. In this game, two feet can make a world of difference.

If you drive over the bridge of almost any river during a busy Saturday, you are likely to see several bass boats lined up on the rip rap throwing perpendicular to the bank. While it may be easier than throwing parallel to the rip rap, fishing perpendicular is the quickest way to minimize your success.

While fishing closely to the bank will produce more fish, it requires some special attention to detail. Wheeler prefers to set up his cast in a manner that allows him to execute a sweeping hookset to the outside of the boat. Doing so will not only protect your rod from the rocks, but will also help minimize the chances of the fish breaking you off in the rip rap. 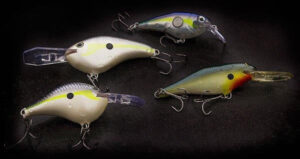 “It’s hard to beat a Shad Rap,” Wheeler said. “I throw it a ton in the fall, because its tight wiggle will draw strikes when absolutely nothing else will.”

“The DT Flat has a killer action that has helped me catch a lot of big fish,” Wheeler said. “Its coffin lip deflects off the rip rap really well and drastically reduces my hang-ups.”

“The DT6 is unique because it dives deep, yet maintains a tight wobble,” Wheeler said. “It will run a little over 5-feet deep on 14-pound fluorocarbon, and that’s about as deep as I like to get when I fish river rip rap in the fall.”

“The Clackin Crank is one of the most underrated baits on the market,” Wheeler said. “They have a very different sound than other baits, and it gets down there and shows the fish something a lot different than they’re used to seeing.”

Although fishing rivers throughout the fall can be tricky, don’t let it discourage you from giving it a shot. If you get your hands on the right baits, find the proper areas and concentrate on the critical depths while ensuring a proper presentation through correct boat positioningâ€”you just might have a day to remember. 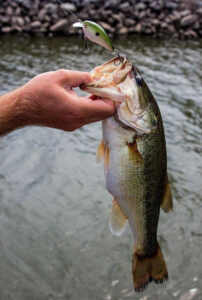