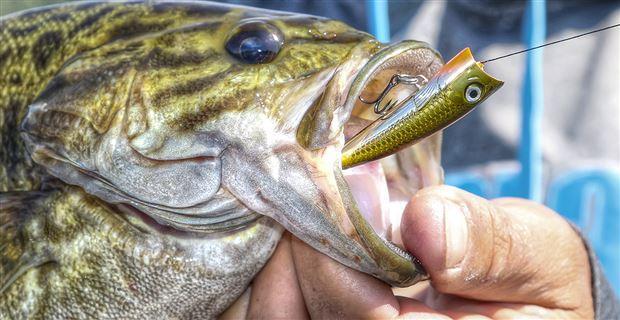 Buzzbaits, crankbaits, swimbaits, topwaters; we often think of these as big, bold, reaction style baits. No doubt, the full-sized versions certainly are, but a subset of miniaturized versions can produce good bass fishing when weather changes, heavy fishing pressure disrupts or forage dictates the size that attracts bass. When they are feeding on tiny shad, minnows or other forage, they get real keyed in on one size and you often can’t get their attention with bigger lures.

Adding shallow water to the list of tiny bait criteria, FLW Tour pro Mark Rose’s selection of smaller-profile baits afford him a diverse palette of presentations. His top three scaled down baits include:

“I can fish skinny water, maybe the bite is tough; but I can hit targets like brush piles, stumps, or whatever and catch fish.”

Rose appreciates the 1.0’s ability to accommodate No. 5 treble hooks. That’s big enough for him to feel comfortable with the bait’s ability to keep a big fish buttoned up.

The choice when Rose thinks the fish are in the mood for feeding up, this 1/8-ounce bait has a low profile so it casts well, even on 17-pound fluorocarbon line. Tracking true, the Mini Pro Buzz offers optimal control on a windy day.

Even with the shorter profile, Rose always adds a trailer hook to his buzzbait.

Kind of a sleeper, blade baits like the Rage Blade Blaster, comprises a metal blade with a lead head and a feathered treble in the rear. Favoring the 1/4-ounce size in tough conditions, Rose employs this bait when he finds schooling fish.

“You just cast it a mile and wind it like a lipless crankbait or a vibrating jig,” Rose said. “It has a good flash with that willow blade body, so I’ll cast it into schooling fish and pull it right through them.” 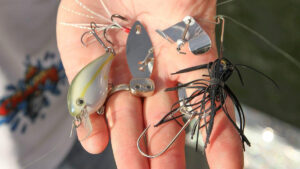 Getting back to the forage distractions, one of the biggest challenges of the fall is competing with young-of-the-year baitfish. This is a vexation well suited for tiny lures like minnows, or the cranks, poppers and shad baits in Rapala’s Ultra Light series

“The shad that were fry in early summer have now grown to 2-3 inches long and the bass get really keyed in on those baitfish,” Dunkin said. “It can be a really frustrating time if you throw a bait that’s too big, so you have to go to that small stuff to get bit.” 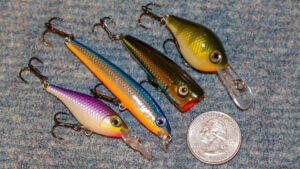 This time of year, Dunkin expects to find those small baitfish over shallow flats, usually near deep water.

“Sometimes it’ll be in the back of a creek or the back of a pocket, but a lot of times it can just be a main river flat,” he said.

Within that larger scope, the schooling activity he seeks might occur in open water, but docks, points and even laydowns are fair game.

Dunkin points out that bass will actually use bait schools as cover, like a mat with a heartbeat.

“They’ll swim under those minnows for hundreds and hundreds of yards,” he said. “All of a sudden, you’ll see them come up to feed.” 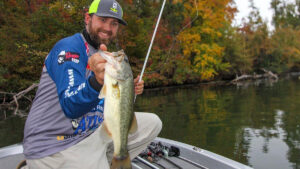 Birds are your allies when looking for the yearling shad buffet. Watch for gulls and terns circling an area and remember, they do this for a living, so trust their signals.

Birds covering water are looking, but those that circle an area, criss cross a particular spot or make frequent downward glances have spotted something they like. It’s usually a pod of bite-sized minnows and the sky rats are waiting for bass to push the groceries within reach.

In deeper water, side-scanning sonar can help you spot these opportunities before the craziness breaks the surface. However, in shallower areas, it’s mostly a visual game.

“I’ll ride and look for the schools of small baitfish; I’ll watch for the sun to glimmer on them,” Dunkin said. “You can catch a glimpse of those little baitfish moving around on top.

“They’ll all push at the same time and make like a spray when the bass are close. You can tell the ones that are nervous.” 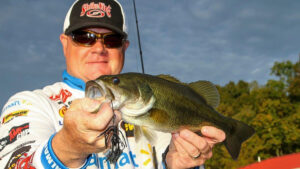 “The biggest thing is take your time when you get one hooked and realize you’re not horsing it on a flipping stick and 25-pound line,” he said. “You just have to play them down.

“With smaller hooks, if you take your time, you’ll land more than you do on the bigger stuff. I think that’s because the fish can’t get as much leverage against that hook or lure to throw it.”

Dunkin likes to fish those smaller baits really erratic — as fast as you can stand to fish it. That’s because you’re competing with hundreds of other baits that look just like what you’re throwing.

“Something that makes your bait stand out will get you bit.”