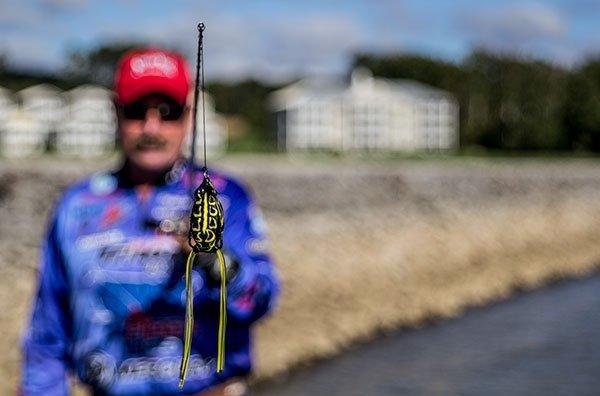 When many of us begin our dissection of riprap, we instinctively reach for our hard reaction baits such as crankbaits, jerkbaits and topwater plugs. While we may enjoy moderate success with these traditional approaches, one professional angler thinks we may be severely limiting our potential.

Elite Series pro Shaw Grigsby is well renowned for using topwater frogs for bass fishing. Although it may be tempting to chunk a frog into heavy vegetation, he suggests targeting riprap for some heart stopping topwater action.

Why choose a topwater frog?

It’s no secret that bass love to hang out around riprap banksâ€”especially throughout the fall months. As the submerged rocks grow algae, millions of shad will feed on them for nutrients. Of course, wherever the shad are, the bass won’t be far behind.
When shallow riprap bass are pressured, Grigsby uses a Strike King KVD Sexy Frog to fool the big ones

“Riprap banks offer an outstanding food source for bass,” Grigsby said. “Not only does the algae growth attract shad, but bluegills are also big suckers for rocky banks. Bass are also attracted to riprap due to the warmth it retains. As the weather gets cooler in the autumn months, big bass will come from all around to soak up the warmth to stay comfortable and active.”

Grigsby understands the effectiveness of hard reaction baits in these areas, but he keeps a frog nearby for two primary reasons.

Finding the most productive riprap

Every body of water is different, but the majority of available riprap is located around bridges. You may be able to find riprap that landowners use to support seawalls, but Grigsby starts his dissection the old fashioned wayâ€”with a simple lake map.

“If you want to find some good starting points for this technique, grab a map and look for anywhere a road crosses over the lake,” Grigsby said. “In the fall, it’s ideal to find riprap in creeks in order to capitalize on the shad migration. If you can find a road bed crossing the middle of a creek, you’ve got a good chance at having a lot of success.”

Grigsby targets corner pockets where nearby roads connect with the bank.

It’s almost impossible to point to a section of riprap and call your shots with a frog, but there are a few key characteristics Grigsby looks for when he locates a stretch of riprap.

Casting angles make all the difference 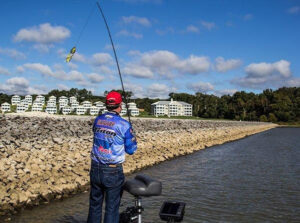 Grigsby parallels the riprap to keep his bait in the strike zone longer.

When fishing riprap with topwater frogs, it’s important to utilize the correct casting angles. Similar to any other bass fishing technique, keeping your bait in the most productive strike zones is paramount.

“It’s essential to make parallel casts to riprap,” Grigsby said. “You’re probably not going to pull fish from 15 or 20 feet away to eat your frog, so keeping the frog within a few feet of the rocks will draw a lot more blowups. The large majority of your bites will come within 3 to 5 feet of the riprap.”

There is one exception to the rule, however. If you pay close attention, you’ll run across certain rocky banks that extend further into the water than othersâ€”in some cases the rock can protrude 15 feet from the bank. When you find these areas, it’s okay to back off a bit.

“If the riprap carries on into the water for several feet, big bass will cruise on top of the rocks and look for an easy meal,” Grigsby said. “In these situations, it’s okay to get further away from the bank and target the submerged rock. You’d be surprised by the vicious strikes it will get you!”

Grigsby’s proximity to the rocks also changes depending upon water clarity. He uses a simple rule to help him stay in the strike zone longer.

While many topwater techniques are highly effective in overcast or lowlight conditions, frog fishing around riprap actually calls for the polar opposite. Grigsby looks for high, bright skies instead.

“Overcast days are okay for this, but clouds will hurt the shad activity,” Grigsby said. “They’re not too big on the idea of coming to the surface and getting frisky when it’s cooler and cloudy. Sunny days are outstanding, however. When the sun is high in the fall, the bait will be higher in the water column, which is essential to this technique.”

Windblown riprap is always a hot-ticket item for crankbait fishing in the fall, but it’s not ideal for frog fishing. A small breeze is totally acceptable, but high winds can really hurt your chances

When the sun is high throughout the fall months, shad will be higher in the water column. In lowlight conditions, they’ll stay deeper and less active. If you understand shad behavior, you’ll catch more bass.

“Frogs are a pretty stealthy topwater bait, so it’s hard for a bass to get a solid bead on it with a lot of wind,” Grigsby said. “For that reason, I really like slick, calm days for frogging riprap. On windy days, you’re better off with a Strike King KVD Sexy Dawg because it creates a lot more commotion. “

Grigsby’s retrieve cadence certainly changes depending upon the weather conditions, but here’s the catchâ€”it can change daily. As a result, he stresses the importance of constant experimentation.

“I know it’s clichÃ©, but you’ve got to let the fish tell you what they want,” Grigsby said. “I generally start with a basic side-to-side walking action while incorporating periodic pauses into my retrieve. Early in the morning, they’ll usually eat it when worked quickly, but later in the day you may have to pause your cadence a lot more to get the big bites.”

What to look for in a topwater frog 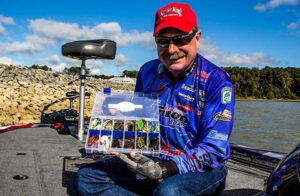 His frog arsenal is extensive, but Grigsby keeps it simple when targeting riprap.

Above all else, Grigsby suggests using a frog that “walks” across the water’s surface. Because fall bass focus so heavily on shad, it’s important for your lure to mimic a wounded or dying shad.

“The Strike King KVD Sexy Frog is honestly the best walking frog I’ve seen,” Grigsby said. “It also has a built-in rattle, so it makes a faint clicking sound which drives the bass insane. I keep my color selection extremely simple, too. More ofte

Even though you’re not fishing around thick vegetation, braided line is the way to go. Grigsby uses 65-pound Seaguar Smackdown Braided Line for all of his frog fishing, regardless of cover. Monofilament stretches too much and fluorocarbon will sink and inhibit the frog’s action.

The next time you hit the water, throw conventional wisdom out the window and try something different. Instead of chunking and winding hard reaction baits on riprap, break out a topwater frog. You’ll catch a lot of bass and have a bunch of fun in the process.