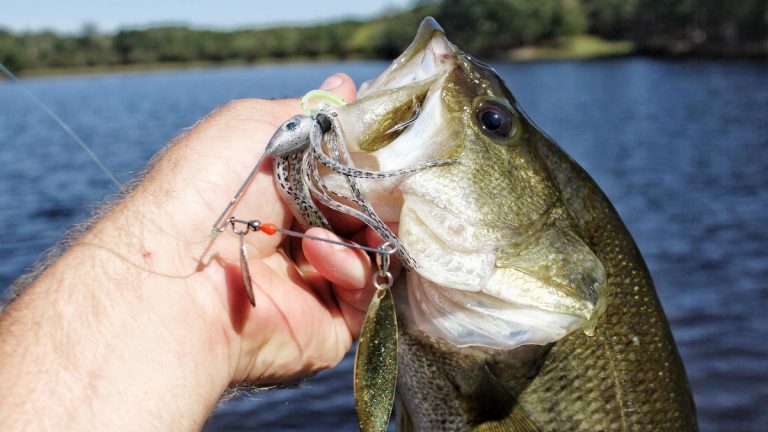 Bass fishing with spinnerbaits is one of the few techniques with which you can expect success throughout the entire year. This versatility comes from the wide array of spinnerbaits available. After all, a 1/8-ounce micro spinnerbait can be used in a completely different setting than a 1 1/2-ounce Ledgebuster, but both are still spinnerbaits.

With so many blade, weight and color options from which to choose and so much bait in the shallows, a spinnerbait is an obvious choice for the fall. But you don’t want to pick up the same spinnerbait in mid December when fall is winding down as you did in mid September as autumn arrives.

So let’s go through how your spinnerbait game should progress through fall. 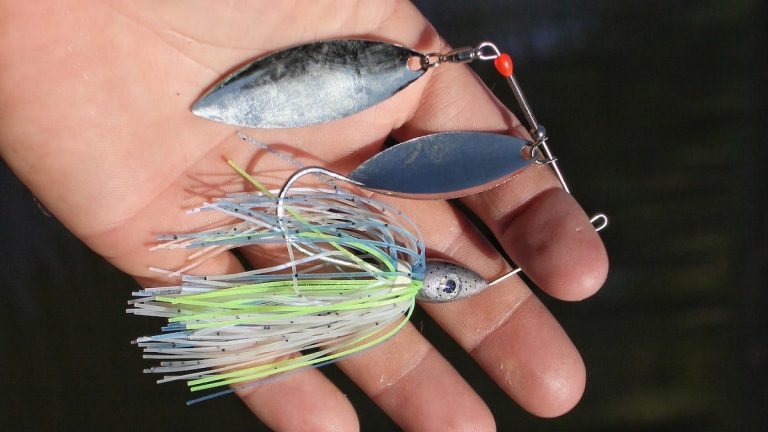 For starters, one of the biggest mistakes we make as anglers is responding too quickly to changes in the weather. After that first cool night of fall, I’ve found myself headed straight to the back of a creek with a double Colorado blade spinnerbait looking to slow roll it and catch a giant. Meanwhile, the surface water temps haven’t dropped 5 degrees and the fish 5 feet below the surface and deeper have no clue a dip in the temperatures have even occurred.

It takes sustained nightly lows and an abundance of clouds or sun for the water temperatures to really change, both in the fall and in the spring. So even though the calendar may say fall is here, I’ve found the bass often forget to check it. The bait is really the best indicator in the fall. Until the bait moves shallow, you shouldn’t. Instead, while the water temps are still in the 70s, I like to stay out deeper and burn a spinnerbait.

“Burning a spinnerbait” simply means to reel it fast, keeping the bait within a foot or two of the surface. Since willow leaf blades offer less resistance than Indiana or Colorado blades, they are best suited for this style of fishing. I’ll usually select a 1/2-ounce spinnerbait in a shad pattern with tandem willow leaf blades both in the 3- to 5-size range, obviously stepping down in size for the interior blade. I go with a 1/2-ounce instead of a 3/8-ounce because of the added range.

You typically need that range since you’re often fishing around schoolers this way. Burning a spinnerbait in areas where the fish are known to school on bait, even if they aren’t actively breaking the surface at present, is extremely effective for catching numbers. Try this around long running points and rocky or sandy humps. The water may be 60 feet deep where you’re fishing, but keep the bait right along the surface and pretty soon a bass will blast it if there’s one around. Oh, and a little wind here is definitely your friend.

Middle of the fall

As the water temps dip into the mid 60s, you’ll really start to see a shift. Bait will begin pushing back into the creeks and larger bays. I’ll look for docks, brush and other cover in slightly stained or green color water where bait is present. It’s this time of year where I like to change up to a Colorado/willow leaf combo, what many refer to as a standard spinnerbait.

You’ll want to stay with that blade combo and keep it in the 3/8- to 1/2-ounce range most of the time, just fishing that bait at a medium pace around whatever cover is present. Be sure to add a little action with your rod tip every 4 or 5 turns of the handle. And it’s always a great idea to “kill” a spinnerbait as it passes by a piece of cover by pausing your retrieve for a second. That makes the bait look injured and is often the last effort needed to trick a staged bass into ambushing your bait.

As I previously stated, that’s the spinnerbait combo I’ll stay with “most of the time” mid-fall. But occasionally, I’ll pick up two other blades this time of year. One being a smaller offering, a compact 1/4-once double willow leaf spinnerbait. And the other, something different all together, a Booyah Super Shad Quad Blade with 4 small willow leaf blades on the arm.

These baits both work really well when there is an enormous amount of bait present. I’ll fish them both around shallow cover and over shallow flats where fish are schooling, the same as my basic mid-fall setup. But these two baits offer something a little different compared to that standard spinnerbait that a lot of other people are throwing this time of year. And I’ve seen instances where both have caught fish in the fall when the basic 1/2-ounce Colorado/willow leaf combo couldn’t draw a bite.

Dad and I have fished Wheeler Lake in north Alabama every October with our local club for decades. There’s almost always a deluge of shad shallow when we’re there. And at times, too much of a good thing isn’t a good thing. With so much of the real thing from which to choose, it’s hard to grab the attention of a bass. Those little 1/4-ounce blades like the Nichols 33 Mini Double Willow Leaf will often do the trick, offering up a smaller profile bait that the bass can’t pass up.

The Quad Blade is something else we also dialed in on Wheeler in the fall. We’ve caught fish on it else where, but that need for something different on Wheeler is what first spurred us to give it a try. We bought one and caught fish on it right away but couldn’t find another and soon found ourselves making our own by tearing down other spinnerbaits and adding blades to the arm. If you can, find the Booyah Super Shad Quad Blade because it’s a much cheaper and quicker option compared to combining the components of multiple spinnerbaits. 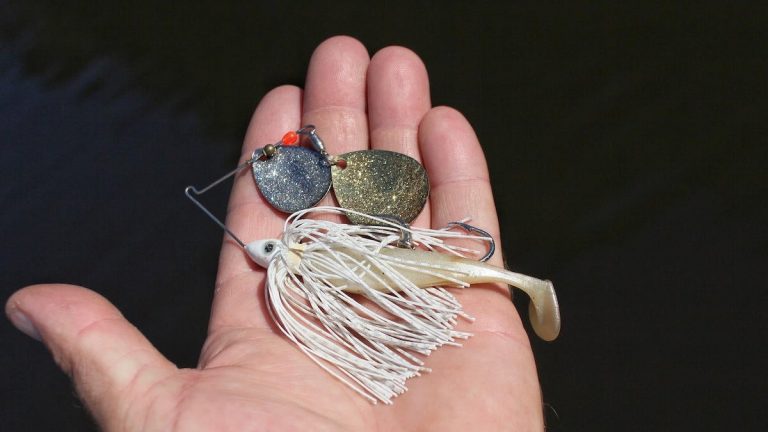 As the water temps start to flirt with the 60-degree mark and inevitably plummet into the mid to lower 50s, the bite really starts to slow down. Well, not the bite so much as the presentation. You can still catch a lot of fish and some of the biggest ones you’ll catch all fall, but you’ve got to start slowing down.

By now, the shad aren’t typically as plentiful shallow. The vast schools of bait that were along the surface everywhere earlier in the fall have since been decimated and the only remnants of their existence is buried in the bolstered guts of the bass still perusing the shallows. The beginning of the late fall is when I’ll circle back to that ‘standard’ spinnerbait in the 1/2-ounce range with a Colorado/willow combo. But I won’t stick with it long.

As the water temps dip below 60 degrees, I’m moving to the most stained water I can find with a double Colorado spinnerbait. I want something I can slow down and crawl through the dirty water in pursuit of increasingly lethargic bass staged alongside cover. I’ll stick with this basic premise as the water temps go from 60 all the way down into the upper 40s through the winter months. And again as the waters warm up and the fish begin to prepare for the spawn, I’m sticking with this bait in the same shallow, dirty water.

The reason you want to stick with a double Colorado in that sub 60-degree water is twofold. The wider Colorado blades offer more resistant and in turn require you to slow your retrieve to keep the bait down. This gives fish time to catch up to the bait. Also, the Colorado blades create more vibration helping bass feel the bait in the dirty water. Those two factors come together to greatly increase your odds versus, say a double willow leaf spinnerbait.

You can fish a double Colorado blade at a reasonable clip to start out with in the late fall, remembering as before with the standard spinnerbait to impart a little extra action along the way by pumping your rod tip. But as water cools into the mid to lower 50s, you’ll really want to slow that bait down. It’s a good idea in the late winter to move to a 3/8-ounce double Colorado so that you can slow your retrieve even further without dragging the bait through the mud. And as the water gets colder, I’ll also take away most of the rod pumping stuff. Just a nice slow retrieve with the occasional twitch is best once the bass become particularly lethargic late in the fall. 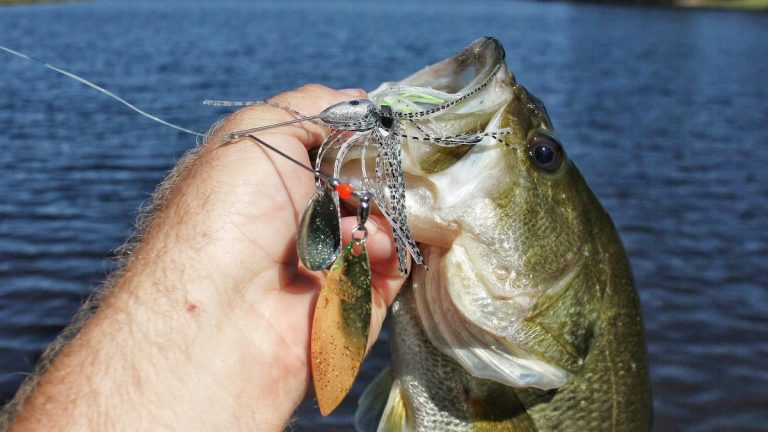 Spinnerbaits have been around forever but they’re still awesome fish catchers and extremely versatile. It’s great to have a favorite spinnerbait but don’t let that confidence in one bait diminish your interests in branching out. I have two, maybe three spinnerbaits I’ll throw 75 percent of the time. But I’ll sprinkle in another half dozen to make up that other 25 percent.

If you’re around a lot of bait this fall and what you’re using isn’t working, try to downsize to a compact spinnerbait or give the Quad Blade a go. And remember, the water temperature doesn’t drop as fast as the air temps do. Be sure not to overrun the bait fish as they make their transition shallow.

Similarly, if you find yourself fishing on a nice and warm, sunny day in December, fight that tendency we all have to fish too fast. Remember, the water temp is what matters. The sun being out may make the fish a little more active and help position them, but you’ll still need to slow your roll to get them to bite.

A spinnerbait is a great bait throughout the fall. Just make sure you tailor your offering to your current conditions and don’t be afraid to mix it up when that first choice doesn’t work. Take water color, water temp and bait presence into consideration when picking your spinnerbait size, color and blade combo and you’ll find your success rate climbing as the temps drop this fall.