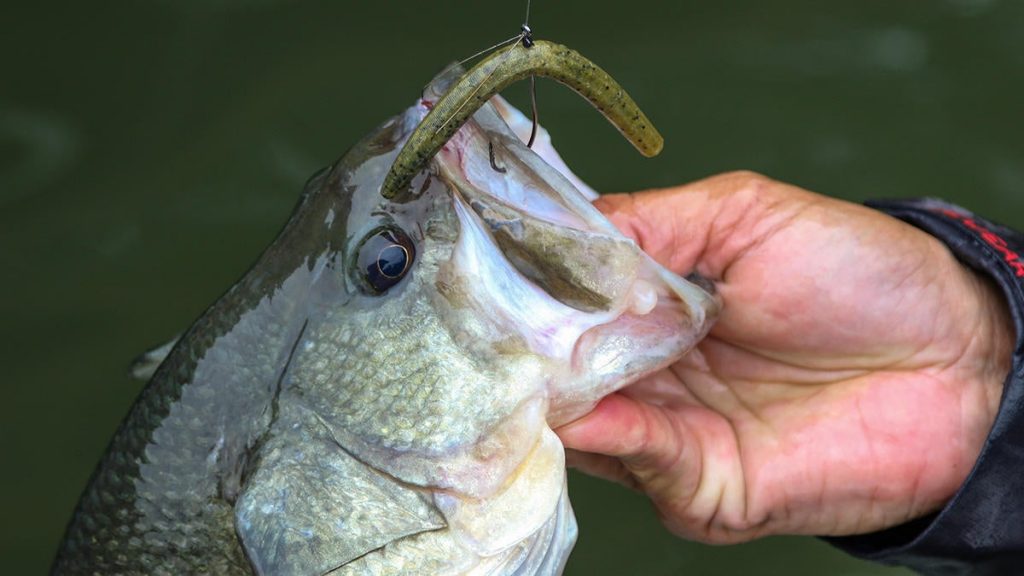 A hook in the middle of a worm; it’s finesse 101, but James Niggemeyer believes the wacky rig has more moxie than most anglers realize. Rather than settling for a timid approach, the Texas pro has developed a rigging style and presentation mindset that takes his wacky game to a more aggressive level.

“We all tend to put baits in certain categories; ‘I throw this in really clear water,’ ‘I throw this around cover,’ ‘I don’t throw this around cover;’ but I think getting out of those mental boxes and really having an open mind as to where you can throw finesse type presentations can revolutionize what you catch in a day â€” especially when the fishing’s tough and the fish really aren’t very aggressive,” he said.

“Throwing a wacky rig in and around cover â€” grass, brush â€” you have to be fearless with the mindset of ‘I don’t care if I lose this bait.’ My hope is that I’m going to throw the bait in there and a fish is going to eat it, so it won’t get hung up on what I’m throwing it at.

“You have to get away from the belief that you can only throw to certain areas and getting to where you’re comfortable throwing 8- or 10-pound line in place where you’d normally throw 16- to 20-pound line.” 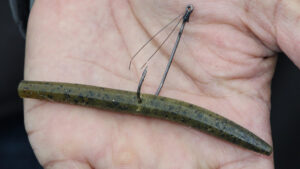 A HOOK TO HANDLE IT

Benefitting anglers off the front or back of the boat, Niggemeyer’s strategy starts with beefing up the hardware. Favoring a Strike King Ocho stick worm, he uses a 1/0 Owner straight shank, cutting point hook.

“With this hook, I feel like I get a higher hookup-to-land percentage,” Niggemeyer said. “Not that the circle hooks (commonly used for wacky rigs) aren’t any good, but I just feel like if I get five bites, I have a high percentage of hooking and landing all five of them with this hook.”

Essential to Niggemeyer’s wacky-rig boldness is the homemade weed guard he forms from saltwater grade rigging wire. With the hook held in his fly tying vice, Niggemeyer forms a loop in a 4-inch piece of wire, passes the ends through the hook eye (front to back), bends the ends against the shank and secures them with fly thread and finishes the connection SuperGlue with a coating of dark fingernail polish.

Once the glue and polish set, he clips the wire loop to create a two-pronged weed guard.

“This works really well at just helping me get that bait through the cover,” Niggemeyer said. “I spread the weed guard on either side of the hook point so if the rig happens to lay on its side, this still keeps it from hooking the bottom or whatever cover there is.” 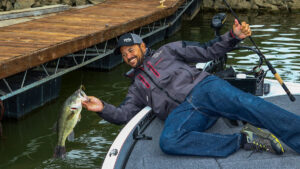 When his wacky rig finds a taker, Niggemeyer mentally shifts gears from that initially bold attitude, to one of prudent patience.

“With your jigs and your bigger flipping presentations, you generally want to set the hook hard and just start winching, but you can’t do that with finesse baits or you’ll pop your line,” Niggemeyer said. “But that actually plays to your favor. Just take take your take time, give a nice clean sweep and follow through with some pressure in the opposite direction of where the fish is going.”

Often, steady pressure will influence a fish into open water, but if Niggemeyer feels his opponent making a last-ditch run toward entanglement, he’ll switch to upward pressure. Normally, we want to keep the fish’s head away from the surface, as jumping risks a thrown hook. But a brief, concentrated effort to alter the fish’s direction can be a game changer.

“If the fish goes right into the cover, just maintain pressure,” he said. “A lot of times, the drag of the line will wear him out pretty quick. He’ll get tired and then you’ll just have to reach in there and grab him. It’ll be surprising what you can do if you don’t panic.” 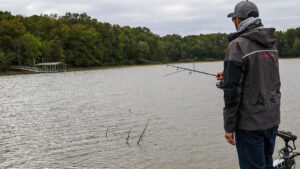