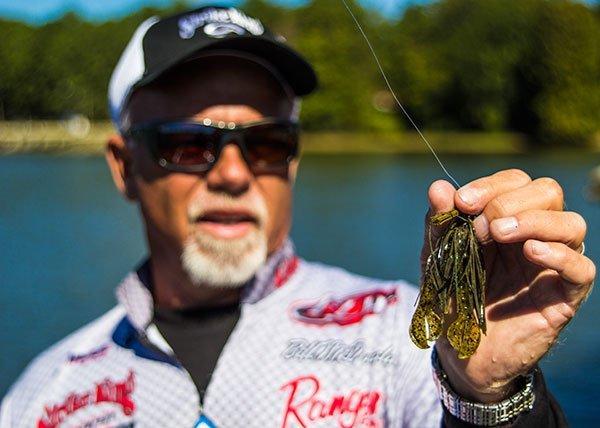 Vertical cover offers outstanding bass fishing opportunities as the temperatures begin to cool. Many of us fish vertical cover, such as dock posts, but do we really fish it correctly?

According to FLW Tour pro Bill McDonald, very deliberate and precise presentations are necessary in order to take full advantage of vertical cover. Although much of his success comes through process of elimination, there are 5 presentations that consistently produce big bass for him.

When an abundance of shad is present, McDonald keeps a spinnerbait nearby when dissecting vertical cover. We tend to overlook the effectiveness of spinnerbaits, but they’ll save the day in a hurry throughout this time of year.

When McDonald is looking for a big bite on vertical cover, he most often uses a Strike King Denny Brauer Structure Jig. With its big profile and snag-resistant design, he’s able to efficiently target standing timber and dock posts.

Stick worms may not look like much in the package, but they’re bass-catching machines around vertical cover. McDonald uses a Strike King Perfect Plastic Ocho to overcome tough fishing conditions. 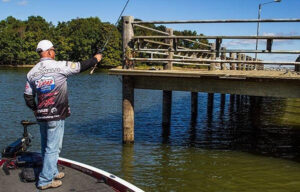 In especially gnarly vertical cover, McDonald prefers using a creature bait, such as a Strike King Rage DB Craw or Strike King Rage Tail Craw. The smaller profile of a creature or craw-imitation soft plastic decreases his hang-ups and allows him to target much thicker cover.

McDonald also does a lot of damage with hard topwater lures around vertical coverâ€”especially if the water is clear. He alternates casts with a Strike King KVD Sexy Dawg and a Strike King KVD Splash Popper until he discovers what the bass prefer on a given day.

Instead searching for more attractive horizontal cover, spend some time this year targeting vertical cover. Not only will it hold big bass, but it’s often overlooked by many anglers. Rememberâ€”unpressured fish are going to be easier to catch.

What is your favorite type of vertical cover? In which times of year do you have the most success on it? Comment below!