If you read any of my articles, you’re probably well aware that I’m a huge crankbait fan. I don’t know why, but there’s nothing better to me than feeling those big head shakes on a cranking rod. I just simply can’t get enough of it.

Fall is an excellent time to fish with crankbaits. As the shad make their annual migrations to the backs of creeks throughout the country, bass aren’t far behind. Shad is the prime menu item this time of year and crankbaits do an excellent job of imitating them. Whether you’re a beginner or expert, you’ll likely find quick success with these bass fishing lures.

I’ve been waiting for this cooler weather all summer long because I have several crankbaits I’m excited about testing. I haven’t fished with them yet, but judging from the looks of them and the hype I’ve heard from several of my fishing buddies, they’re definitely going to be on a lot of anglers’ radars this fall. 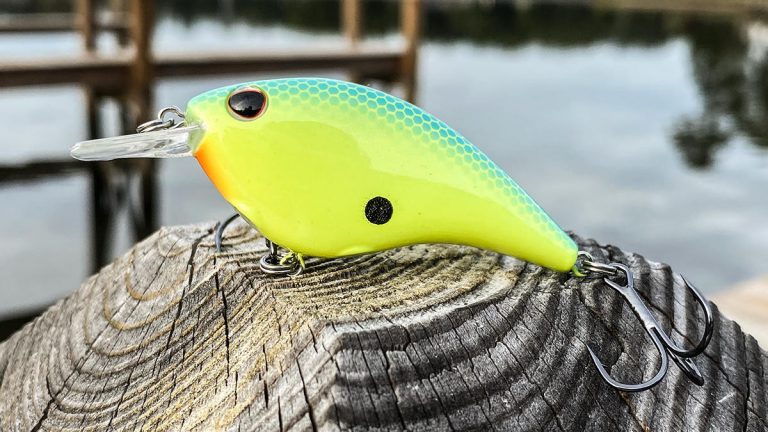 Admittedly, I think I may be a little late to the party on this one. But there’s a good reason for that: I couldn’t find one to save my life during this past prespawn. A bunch of folks I know were catching the heck out of ’em on this flat-sided, finesse crankabit and by the time I got to search around for a few, they were sold out everywhere I looked. I live in the Southeast and it seemed like there was a big tournament won on this crankbait nearly every weekend.

Now that I’ve tracked down a few, I’m pretty pumped up. As the name implies, this series was designed by David Fritts. If you’re not a follower of professional bass fishing, he has been a cranking legend for decades and he actually designed this lure based on the crankbait that won him the 1993 Bassmaster Classic.

I love a flat-sided crankbait in the fall because they just seem to get a bunch of bites. The problem is, however, they don’t always cast that well because of their small sizes. The Berkley Frittside, however, was designed with a weight located on the chin-area of the lure. So while my buddies tell me it has the action of a balsa plug, it has the castability of a modern-day plastic crankbait.

When I’ll reach for it: Whenever the bass get on those shallow, secondary points chasing balls of shad, I’m definitely going to be trying the Frittside. For whatever reason, a small flat-sided crankbait tends to get a pile of bites for me when the shad finally make their way into the small bays and pockets. 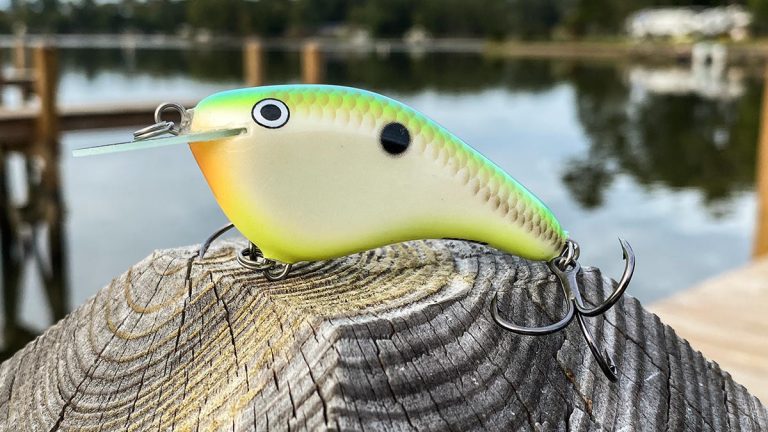 There’s been a bunch of talk about this flat-sided crankbait for the last few months. Jason has fished it a little bit on a nearby river and liked what he’s seen so far, but I can’t wait to get my hands on it. I finally tracked down a few (COVID-19 has made it tough to get a lot of popular lures) and I’m excited to see what it can do.

The “OG” stands for “Ott’s Garage”. Professional angler Ott Defoe designed this crankbait and according to several shallow-fishing aficionados, he’s one of the best bait designers in the business. It’s made from premium balsa and of course, has flat sides and a lightweight circuit board lip. Just looking at it, I can tell it looks very similar to the discontinued Rapala DT Flat, so I’m interested to see how it’s different underwater.

When I’ll reach for it: Diving down to the 6-foot range, I’ll probably use this crankbait a lot around boat docks. That’s a big pattern around here throughout the fall and it just so happens that some of my best-producing docks sit in roughly 6 feet of water. I don’t know if you remember the old handmade Gulp crankbaits that used to be prevalent in the Southeast years ago, but the OG Series Slim 6 favors it quite a bit. The old Gulps used to be a huge dock-fishing staple around here. 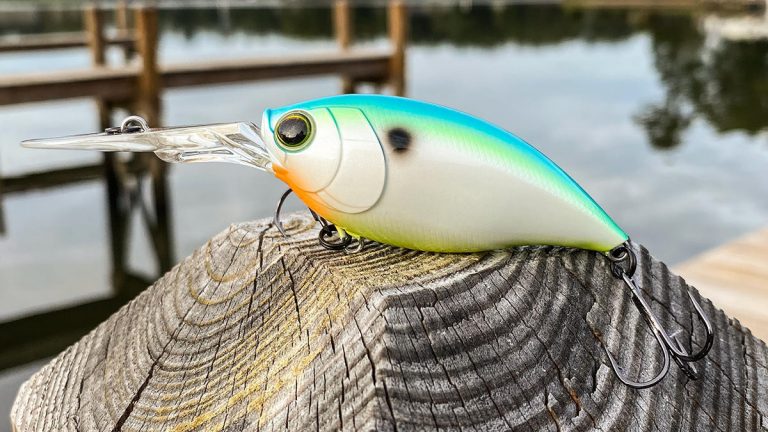 While it’s a bunch of fun to chase and catch smaller schoolers in the fall, hanging back towards deeper water can pay some pretty big dividends if you’re patient. Just last night as my wife and I were heading back to the boat ramp, I ran across a crazy-big scrape of bass on a creek ledge sitting in 8 to 15 feet of water. The Hardcore Crankbait 3+ would have been absolutely perfect for that situation.

But of course, the one I have was sitting on my workbench in my shop. Figures, right?

I feel like I’m going to be able to cast this plug a mile. It has a tungsten magnetic weight transfer system that’s supposed to increase your casting distance by 30%. Again, I can’t confirm or deny that yet, but it would be awesome if that holds true. Cranking those fall creek ledges requires long casts so your crankbait maximizes its time in the strike zone. Not only am I looking forward to testing the castability of the Crankbait 3+, but I’ll be flat-out honest-these are absolutely gorgeous crankbaits and they’re only $9.99. I’d be okay paying double that price for as pretty as they look.

When I’ll reach for it: I’m going to fish a bunch of primary points and creek ledges with this crankbait. The bill angle tells me that it’s going to reach its maximum depth quickly and efficiently, so if I get tired of chasing small schoolers and want to look for a big bite adjacent to deep water, this plug is going to be in the lineup. 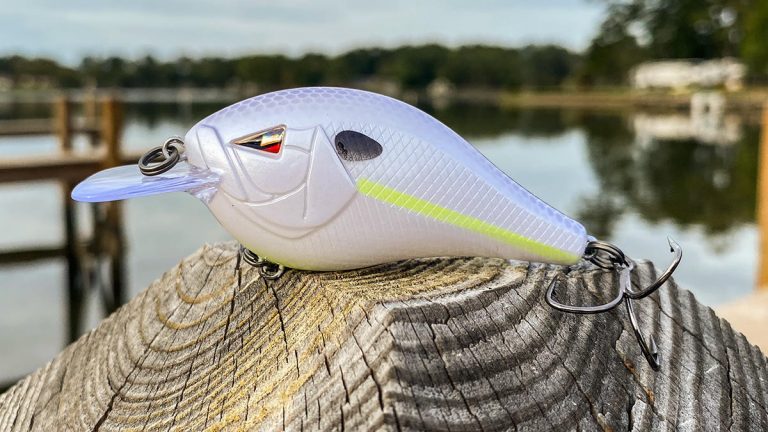 While it’s a wicked-looking crankbait equipped with razor-sharp Mustad Triple Grips, the aesthetics and hardware of the Team Ark Squarebill actually became secondary to me whenever I shook the crankbait in my hand. It has a much deeper rattle than most squarebills I own and just between us, that characteristic can be absolutely money in both the fall and late winter. Any time the water temperature is below 65, in my opinion.

I wish I had some cool, definitive and biological answer to give you. But honestly, I think a lot of the effectiveness of these deeper rattles has to do with fishing pressure. You’re not going to find a time of year in which anglers cast a crankbait more than fall and late winter. But most of the crankbaits on the market feature either a) high-pitched rattles or b) no rattles at all. This deeper and duller rattle is an absolute fish catcher in cooler water.

When I’ll reach for it: I’ll be testing this squarebill around the thickest cover I can find on those bluebird days following a weather front. The high barometric pressure often gets those bass positions super-tight to cover, so when I need to cover water quickly while still dissecting laydowns, stump rows and rip rap, this crankbait is going to get the nod.

I saved this one for last because I think the 3DR Series Shallow Crankbait has all of the ingredients to be the biggest fish-catcher of the fall for me. Now, will it catch bigs or just rats? I have no idea yet. But this is one of the prettiest little things I’ve run across this year. And it’s also just $7.99.

This little crankbait is just 2 inches long and weighs just 1/4 ounce, so I think my biggest issue will be finding a suitable rod to use with it. I’d definitely prefer to throw it on a casting rod rather than a spinning rod, so I’m hoping a medium-action or maybe a medium-light action jerkbait rod might do the trick. But I really haven’t seen a better baitfish-imitation from a crankbait manufacturer in quite some time.

It has an excellent flash to it thanks to what they call a 3D Internal Prism and the hooks seem to be super sharp. They’re definitely small, so I’m going to experiment putting some larger, short-shank hooks on this plug as well. The diminutive stature of the 3DR Series Shallow Crank might now be able to handle anything larger, but I’m certainly going to give it a shot.

When I’ll reach for it: I’ve been seeing a bunch of bait balls on the surface every evening and it’s downright tough to get bit around ’em. I trolled over to one of these baitfish schools, however, and quickly realized it was because I was throwing crankbaits and topwaters that were way too big. The bait is about 2 inches long right now and this particular crankbait is a dead ringer for them. This weekend I intend to go chase some bait and chuck this little dude around. I really think this crankbait will result in some 50+ fish days for me this fall.

Again, I haven’t tested any of these lures yet. But I wanted to give you my first, unadulterated thoughts on each of the crankbaits I’m most excited to try in the coming months. Keep an eye on the website because I’ll be sharing my experiences with each one after I fish and catch some nice bass with ’em.