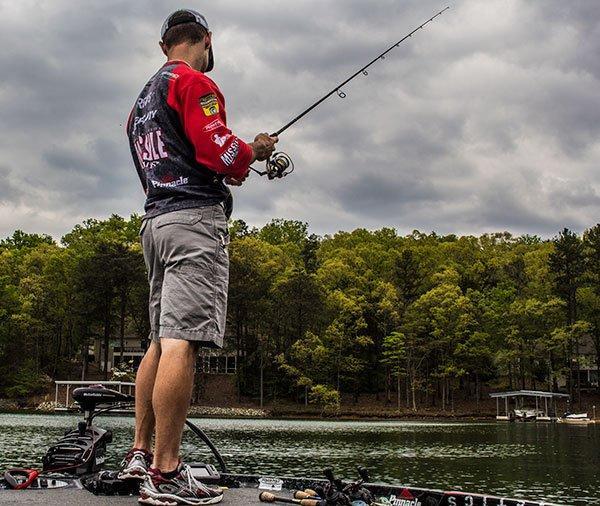 Post frontal weather conditions are often a bass angler’s worst nightmare. It never fails””you’re forced to endure a bright, sunny workweek and the night before your Saturday morning derby, a massive front rolls through the area and totally upends your game plan. Although frustrating, these difficult conditions can actually turn into very productive fishing days.

How do fronts affect bass fishing?

It’s not uncommon to hear anglers condemn post frontal conditions, but it’s important to understand how fronts affect bass behavior. While some blame high barometric pressure and inactive fish, Crews has a more basic take on the situation.

“After a front moves through an area, it usually gets very calm and sunny,” Crews said. “The lack of surface disturbance and the increase in light penetration allows bass to see much better than they usually do. As a result, it’s easier for them to detect the slightest unnatural characteristic of your presentation.”

In addition to prompting wary bass behavior, sunny, post frontal days leave bass with fewer places to hide. Because they are ambush feeders, bass prefer to hide in underwater cover and attack prey when least expected. When they’re forced to tuck far underneath a submerged log or dock, their strike zone is drastically decreased.

“Whenever it’s cloudy or overcast, bass don’t have a problem roaming around because the darker conditions make them feel concealed,” Crews said. “But when they get glued to cover in post frontal weather, they won’t move near as far to hit a bait. They’ll still bite and you can still catch them, but you’ve got to have the right approach.”

Most of us have been taught to slow down when bass fishing after a big weather front, and that’s true””to some extent. While looking for a productive tournament pattern, Crews covers water at a rapid pace until he starts getting bites. Then, and only then, will he slow down his approach.

“Although post frontal fish can be hard to catch, they can also be easier to pattern,” Crews said. “My biggest priority is covering water””I’m not going to spend much time fishing areas that don’t produce. If I get a bite on a dock, I’m going to shoot to the next dock, slow down and begin fishing more thoroughly. Sometimes all it takes is a couple of bites to really key you in on what the fish are doing. 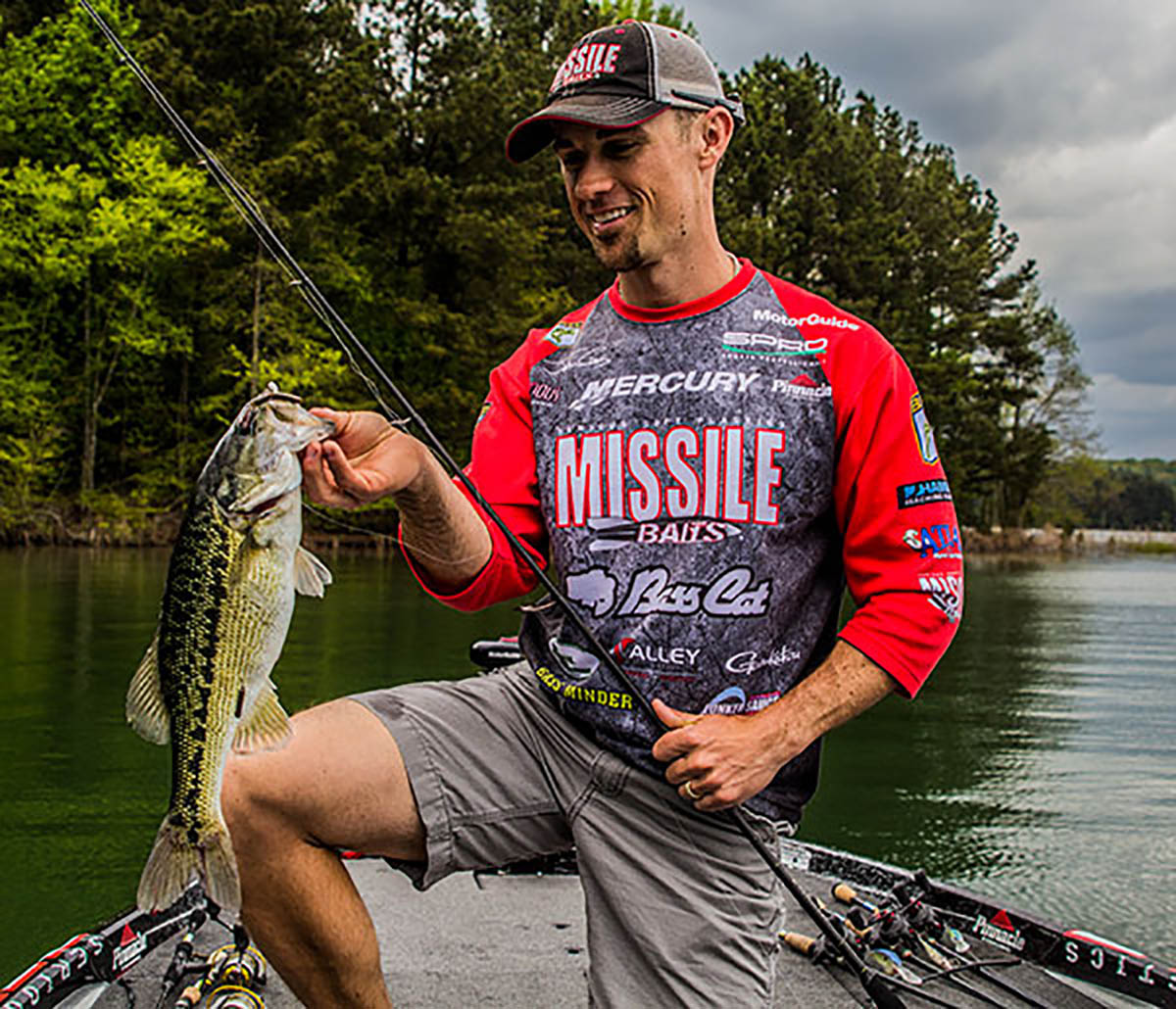 When the fishing gets tough following a weather front, the first thing Crews picks up is a 3/16-ounce Missile Baits Warlock Head paired with a Missile Baits Fuse 4.4 on 8-pound Vicious Pro Elite Fluorocarbon. It’s a deadly combination that has accounted for many of his fish catches.

“I use this combination as a search tool because it catches so many fish,” Crews said. “I’ll fish it on points, under and around docks, on bare banks and on rip rap””this rig will catch fish in a variety of situations.”

When throwing a shaky head, Crews makes very long casts to efficiently cover water. When the bait reaches the bottom, he slowly drags the bait while maintain bottom contact. When he feels a piece of cover, he’ll slow his presentation while incorporating occasional pops and twitches into his retrieve.

“The biggest key is to drag it without getting slack in the line,” Crews said. “The minute you get slack in your line, a shaky head is going to settle into any nearby crevices and get hung. It’s always important to keep a little bit of pressure.”

Crews prefers the Missile Baits Fuse 4.4 during post frontal conditions for one reason””it’s natural movement. The thin arms and pinchers have a very subtle movement without any rod movement. Although very soft and pliable, he also considers it an economical choice as he often catches up to 8 fish on a single bait.

When the bite gets really tough for Crews, he breaks out his drop shot rig””a Missile Baits Drop Craw rigged on a no. 2 Gamakatsu Octopus Hook on 6-pound Vicious Pro Elite Fluorocarbon. Although his bait selection is extremely small, it plays into his favor in post frontal conditions.

“The Drop Craw is so small, sometimes I think the bass can’t really tell what it is, which spurs a lot of bites out of pure curiosity,” Crews said.

Because bass tend to get much tighter to available cover or the bottom after weather fronts, Crews uses a shorter leader for this drop shot rig. He fishes it in the same areas as he would a shaky head, but with an even slower presentation. After a long cast, he’ll drag his drop shot until he finds a piece of cover and simply hold it still while the Drop Craw sways with the motion of the water. Too much movement can spook these wary bass.

“As much as I’ve tried to develop a steadfast rule regarding when a drop shot is better than a shaky head, I really don’t think there is one,” Crews said. “That’s why it’s always important to keep switching presentations until you start getting bites.” 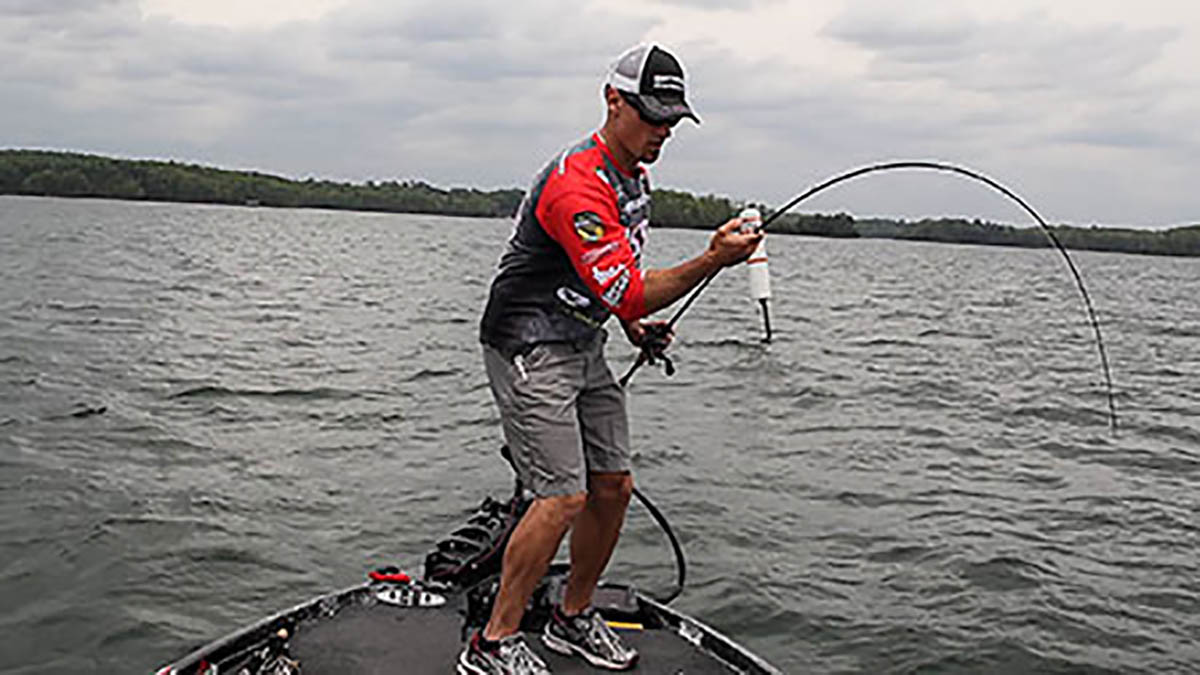 If he finds himself in an area with too much cover for the 2 aforementioned techniques, Crews scales down his usual flipping rig and goes to work. By threading a Missile Baits Missile Craw on a 3/0 Gamakatsu Heavy Cover Flippin’ Hook with a 1/4-ounce weight on 17-pound Vicious Pro Elite Fluorocarbon, he’s able to reach stingy post frontal bass in the thick stuff.

“The Missile Craw has a straight, no-action fall that just darts,” Crews said. “Its fast fall really gets their attention and its neutrally buoyant material gives it a ton of action.”

Crew’s presentation is an important element when finesse flipping. Instead of hopping the bait erratically in hopes of drawing a reaction strike, he drags it along the bottom, the same way he would a shaky head. Even when he’s on a hot bite and a solid pattern, he gets many more bites fishing the Missile Craw slowly.

“It’s usually not too difficult to duplicate finesse flipping patterns on laydowns, docks or even grass clumps,” Crews said. “It’s very important to not make it too complicated””it’s amazing how they’ll find and eat that thing.”

Don’t let the summer’s inevitable post frontal weather keep you at home this year. If you understand how fronts affect bass, cover water quickly and use these 3 techniques, you’ll be able to catch fish in all types of conditions.