Fall bass fishing is a weird creature. It’s tough to run into both quantity and quality in a single day on the water. For me at least, it seems like I have to make a decision right when I launch my boat. Do I want to get fewer bites to catch bigger bass or vice versa?

While I love chasing big bass, it’s hard to avoid the temptation to get out there and just yank on dozens of bass all day long. As the baitfish starts infiltrating the shallow creeks and pockets this time of year, a bunch of bass are right behind them which can lead to an absolute bass beatdown. These schoolers aren’t always big, but this is an awesome way to catch fish until you’re too tired to cast anymore.

Sometimes it seems like these schoolers would eat your flip flop if you threw it towards ’em, but they can definitely get a little finicky at times. I was thinking in my shop the other night and realized that when the fall schooler bite gets tough for me, I tend to reach for three particular lures time and time again.

I’ll go through my thought process and let me know what you think. 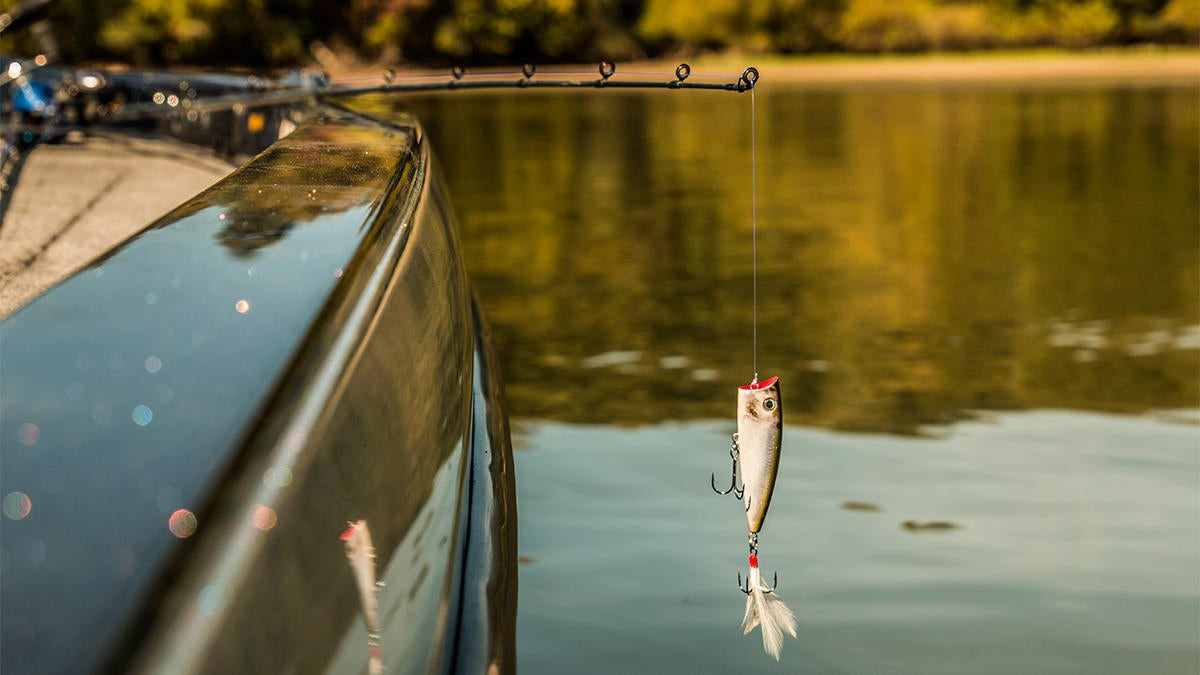 This is weird to me, to be honest. I’ve grown up always hearing that you should throw walking-style topwater lures around schooling bass and until about 10 years ago, that’s what I always did. I had moderate success, but nothing to really write home about.

But man, one day my college fishing buddy Zach and I were hauling down the lake in his little ol’ bathtub of a tin boat and we started seeing both bass and bait busting everywhere. It was a chilly fall day in mid November and we thought we were about to catch a bunch of fish.

As it turns out, one of us was about to wreck ’em. The other person, the man typing this article, was about to have his mind blown.

I threw every dang thing I had in my Kroger sack full of tackle. I threw walking topwaters, soft jerkbaits and who knows what else. I couldn’t even get a bass to look at anything I tried. Meanwhile, Zach picks up a popper of all things and starts getting bit on every single cast. It was the darndest thing and I had never, until then, thought to throw a popper for schoolers. I always assumed they were best used when targeting specific pieces of cover.

To make a long story short, I carry that lesson with me to this day. I’ll always remember that joker giggling like a school girl catching all those bass on that popper. And guess what? I’ve caught several hundreds of bass since then, doing exactly what he did that day.

I was on the lake the other day and I really started studying the baitballs that were on the surface before sunset. When a baitfish breaks the surface, it makes a very subtle spitting sound. It’s unmistakable and that is exactly why the Strike King HC KVD Splash Popper works so well in this situation. Poppers are certainly not all the same and this particular option has a very subtle “spitting” sound that almost perfectly mimics those schooling baitfish. And man, does it get bites. Wow.

Now, you’re not going to cover a bunch of water with it; that’s not what it’s made to do. But if you can cast it towards the baitballs with active bass underneath, you’re going to get a pile of bites. The shad in my area are pretty small right now, so I’ve been having my best luck with the smaller Splash Popper. Even though it only measures 2 1/4 inches, it still weighs 3/8 ounce so casting is still relatively easy with a baitcaster. 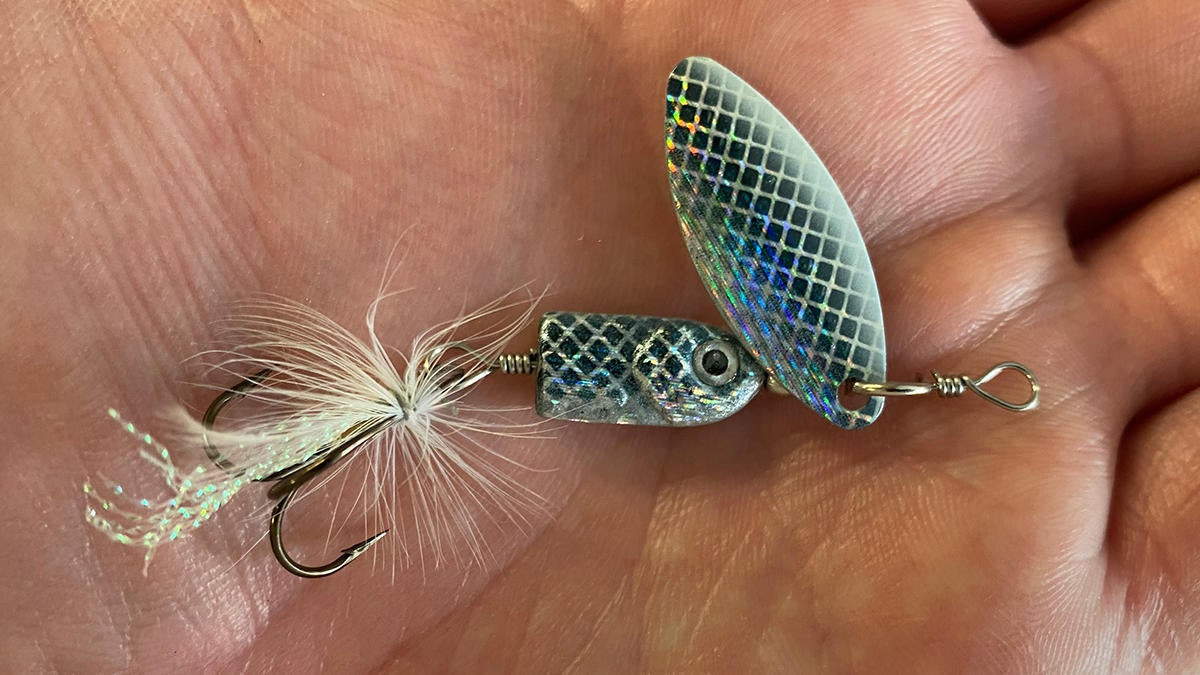 This little inline spinner is a straight up fish catcher this time of year. Don’t be too proud to throw a smaller bait like this when you’re chasing schoolers because they can certainly do some serious damage.

I like this particular inline spinner because it doesn’t have a lot of lift throughout the retrieve. It’s designed with a 30-degree blade that helps the Flash Spinner stay in the 5- to 6-foot range and underneath baitballs. Sometimes the bass surrounding these baitballs aren’t actively feeding on the surface, but they’ll position themselves several feet below the surface to pick off an easy meal of an injured shad. They may not be going crazy, but if one of those shad drop out of that baitball, a bass is going to eat it.

The Blue Fox Flash Spinner allows me to take advantage of this opportunistic behavior. When I’m having a tough time getting bites around all the bait, I’ll cast this lure past the bait ball and let it fall on slack line for a few seconds. As it comes through the bait ball I’ll just barely pop my rod tip to make it swim a little erratic, which is usually when I get a bite.

You don’t need a little flimsy ultralight rod for this particular inline spinner. It weighs 3/16 ounce, so it actually casts pretty well on a medium-light baitcaster setup. Try this when you can’t get ’em to bite anything else and bet you’ll start catching some fish. 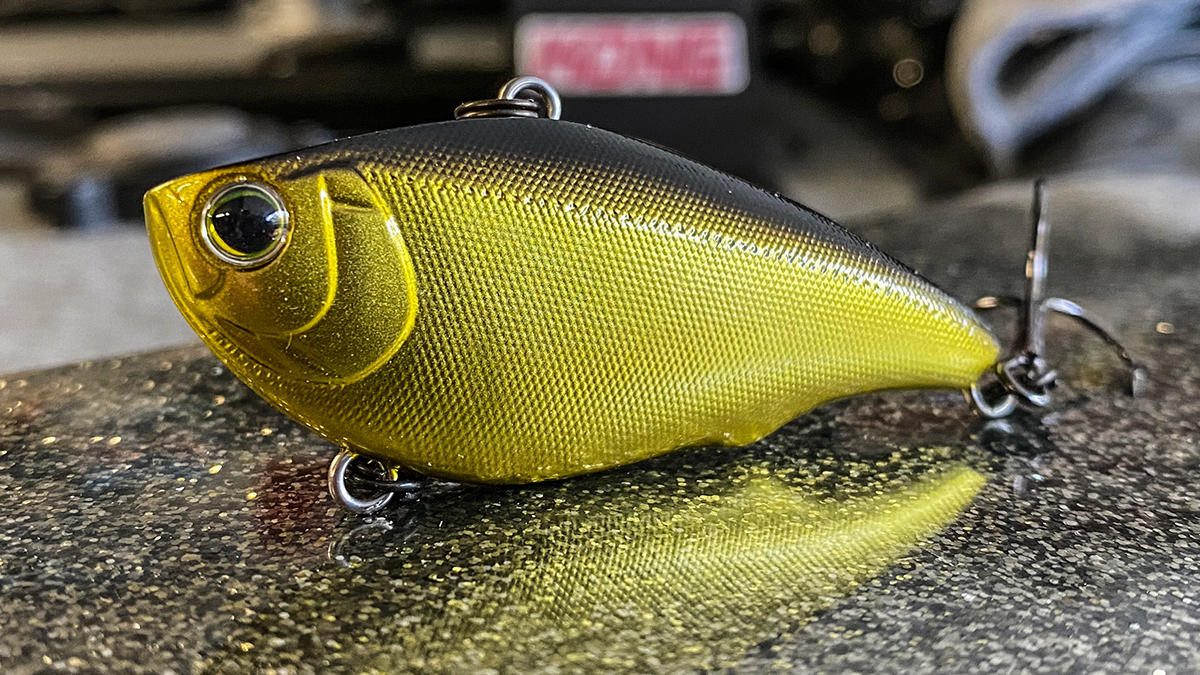 I probably throw a lipless crankbait more than anything else this time of year. Not only does it allow me to cover water quickly but I can also bomb casts across shallow flats and ditches which helps my efficiency when I’m in search mode.

I about cried when the XCalibur XR Series was discontinued. Those were definitely my favorite lipless crankbaits, especially this time of year. I spent hundreds of dollars buying out what remaining stock I could find both online and in stores. Some of them are going for $45 per lure on eBay currently.

But I’ve found another really, really good lipless crankbait. I started fishing the Yo-Zuri Rattl’n Vibe this year and I’m crazy about it. Not only does it have quality components and an excellent action but its casting distance is absolutely insane. The colors are absolutely gorgeous, too. They’re priced starting at just $8.49 and if I didn’t know the price, I’d swear they’d cost upwards of $20 per lure. That’s how high-quality they are and no, that’s not some cheesy sales pitch. It’s just a dang good lure.

Oddly enough, I actually like using the Golden Shiner color in the fall. My local fisheries don’t have golden shiners but sometimes when you get around thousands of baitfish, making your bait stand out a little bit can pay big dividends. In my mind, I liken it to a cat chasing a laser point. I think the bass just react a little more aggressively if you don’t always perfectly match the bait when you’re around big baitballs. Of course, that’s just my opinion.

I’ll cast the Yo-Zuri Rattl’n Vibe past the ball of bait and like the inline spinner, I’ll let it sink for a second or two and run it through the bait. As it approaches, I’ll quickly stop my retrieve and let the lure fall for a second or two on controlled slack line. The bass tend to bite on the fall with this technique, so you’re not always going to feel the bite. When you see your line jump, set the hook immediately.

I do suggest trying these three lures, or some variation of them, this fall. It tends to be a real feast-or-famine time of year for me, especially when I’m chasing schoolers, but these lures tend to make things a little more consistent for me on those tougher days.