I’ve owned several boats over the last 20 years. Owning different brands of fishing boats you find common denominators. Probably the most important thing a good a fishing boat has in common with other fishing boats is a bow mount trolling motor. This year I had the opportunity to fish with a new one from Minn Kota – the Fortrex 112.

After fishing with the Fortrex 112 for 6 months now, I wanted to share my experience with the motor. I received the Minn Kota Fortrex 112 from Minn Kota the first of June.

I’ve fished shallow, deep, in rough water and heavy wind and found several key aspects of this trolling motor to be of note to avid anglers. Here are key points to consider on this relatively new trolling motor:

I didn’t think, at first, going from an 80 to a 109 to a now 112-pound thrust trolling motor would be a big deal. It’s not— if you like swimming. Besides fishing out of my own boat with a 112-pound thrust Fortrex, I’ve fished out of several other pros boats with the 112. The first couple of times I ran the trolling motor, I had to do the big hop to keep my momentum from taking me into the lake. You know where, you jam down on the button with the head cocked to one side on the trolling motor and the boat swiftly swings your momentum and balance out from under you and you have to hop to another spot to right yourself or face the decision to jump feet first or dive head first.

Minn Kota has always done a good job of ramping up to speed when you push the button instead of delivering a full-force blow at the click of a foot pedal button. But at 112-pounds of thrust, the ramp up is considerably faster and stronger. While this is a great feature for battling the wind to hold position away from the bank, it’s something to consider.

It takes 36 volts of power to run the 112 pounds of thrust, so keep in mind with the investment of this trolling motor, there might also be an investment in battery power. 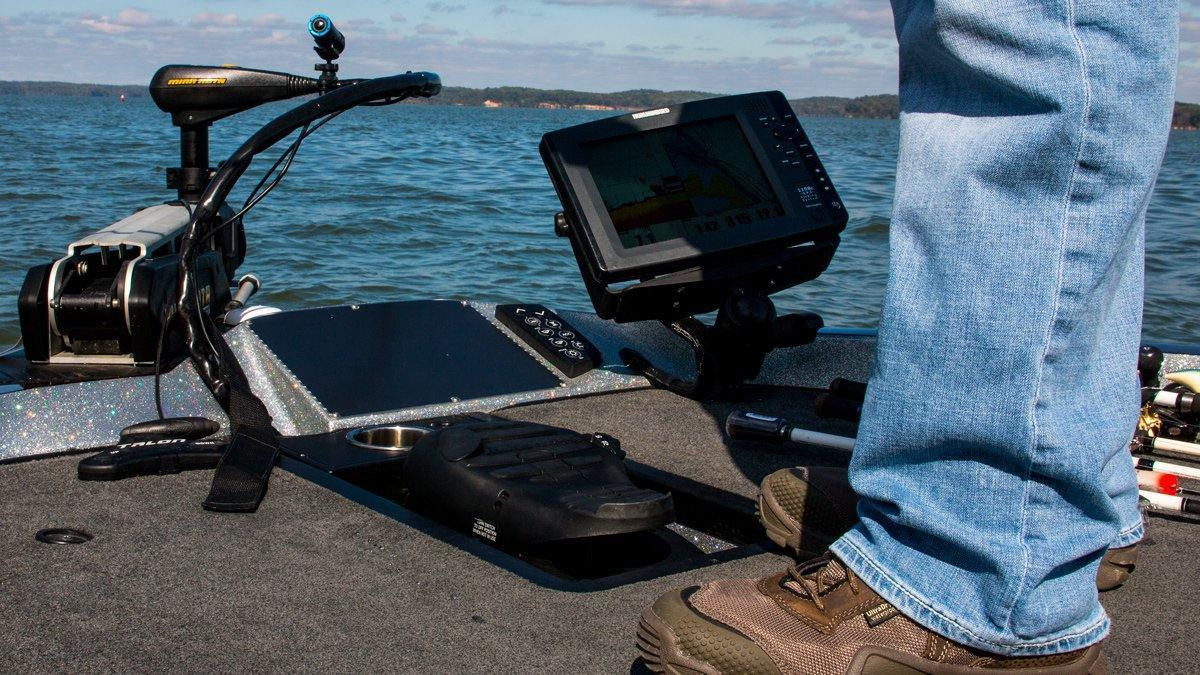 Their Digital Maximizer technology that controls how much power is needed for how long might very well be their greatest achievement. Of course 112 pounds of power is great but not if you don’t have anything left at the end of the day. So I was very relieved with this trolling motor.

Steady as she goes

The other concern involves where I fish most of the time. I live on Kentucky Lake. A great bass fishery, but often not for the faint of heart. Do I need a 112-pound thrust trolling motor to catch a bass? Nope. But it sure is nice when you’re out in 15-25 mph winds with regularity and trying to fish away from the bank in 2- to 5 foot waves.

For the most part, the Minn Kota Fortrex 112 fished very well in heavy wind and waves. The wind blew sustained 20 to 25 mph and even in a bay, fighting the wind was a chore. But we were able to hold with our motor. The variable adjustments on power and speed make it possible for an angler to match the wind precisely and hold on a fish spot to make a good presentation. Nothing is more frustrating than knowing you are around the fish, but just unable to present a lure to them properly because of the conditions.

Get in and out quickly

The most notable aspect of a Minn Kota trolling motor is how easily they deploy and stow when on the water fishing. I really liked that this bigger trolling motor, still raised and lowered easily for fishing. I move a lot when I’m fishing. I try to hit as many likely places as I can on many fishing trips. I can honestly say I’ve raised or lowered a Fortrex 112 thousands of times. Every time it goes up and lays down easily.

I do swap my cables with a T-H Marine G-Force Handle. And that makes stowing and deploying that much better I find. But even with the stock cord, fishing is a lot more enjoyable with the Lift Assist on the Fortrex 112.

Easy to stand it

If you spend all day fishing from the bow of your boat, and on those occasions when fishing is pretty tough, nothing is more frustrating than feeling like you’ve been fighting your trolling motor, foot pedal or both all day. I find I just can’t fish well when I’m struggling with positioning my boat because of a lack of power, or difficult to operate foot pedal.

The Minn Kota foot pedal installs easily and provides a comfortable platform to fish standing on all day. The button is easily operated. The foot pedal is large and can be adjusted to operate very smoothly or very quickly depending on your preference. The rheostat dial allows for precise tuning of speed to match conditions. I love that the trolling motor operated just as well slow in super shallow water this spring as it did out deep in rough water and heavy wind. That says a lot about a product to be useful in such diverse conditions.

I’ve used my trolling motor for several months with no signs of wear or tear. It’s not loose, there is no interruption in the power and it’s smooth and powerful like the day I installed it.