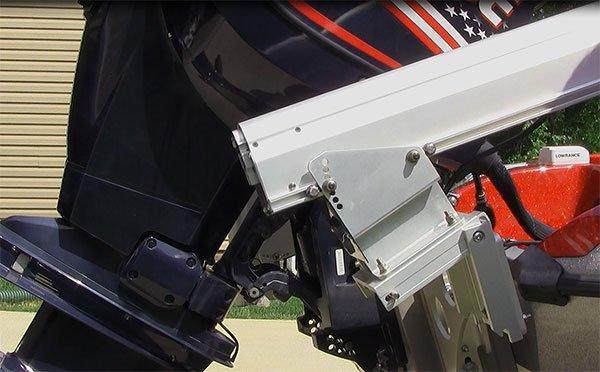 Minn Kota sent me a pair of their shallow-water anchors to test and review last April. I didn’t want to run them for a month and then do a review, so I spent nearly a year testing them before writing this. When I first got them, I thought to myself, “these are going to be handy for flipping.” But I realize now they are so much more versatile than that. In fact I’ve found several ways they have made life easier on a boat, including:

Beyond the several uses I’ve found for having an automatic remote-controlled shallow-water anchoring system, there are several reasons that I like the Minn Kota Talon. Those include the following:

Installation so simple and quick

I installed the Talons in roughly under an hour. It goes a lot faster with another set of hands to hold the weight of the Talon as you slide it into the brackets. The brackets mounted quickly and easily with two bolts on each side of the jack plate. Then you have the option to install an addition quick release bracket to allow you to quickly fold the talons down. I actually installed one with it and one without so I could test both types of installs.

The break-away release bracket is quick and easy to operate but did have a little play in it which causes the talon to rattle some as you run. The one without the bracket obviously could not easily be folded down on the water but it was mounted solidly and could be dropped by releasing tension on the bolts.

Remotes and automation make it easy

I programmed three of the included remotes for my install. You basically hold down a button on the Talon and push a button on the remote and they sync up quickly and easily. I put one remote on a lanyard. I mounted one in the front and one in the back under my console so I could drop the anchors quickly and easily from both ends of the boat.  A simple double click drops the anchors where you are and one click on the up button gets you moving again.

The peg drops and into the water and stabs the bottom three times to make sure it takes a strong hold. You can put it in rough water mode and it will continually check to make sure it gets a good hold by re-stabbing into the bottom at set intervals.

Where the Talon really shines

I have used the Talons a lot on my own. I back the boat off the trailer and anchor down with the Talons next to a dock with a space to keep the boat’s fiberglass from rubbing on the dock.

Then I might get some rods ready before pulling the spikes and heading out. But where I’ve found the anchors invaluable is on windy days when I’m catching fish shallow. I have had numerous occasions where the wind was blowing me down a bank, I catch a fish and it messes up my plastic. I drive the Talons down and retie or re-rig. Pull the Talons up and make one cast and catch another quality fish. If I had just drifted and tied or rigged, I’d have missed that next bass.

For flipping, fan-casting, launching, loading, or just stopping the boat and taking a picture, eating a sandwich or getting some tackle organized, I use the Talon shallow water anchor constantly. They have added a ton of convenience and control to how I fish shallow.