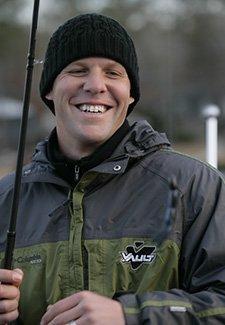 Some guys are known as great flippers and pitchers. Denny Brauer and Tommy Biffle come to mind there. Some are great power fishermen. Kevin VanDam and Skeet Reese are names at the top of that trade. Some are great boat drivers. Shaw Grigsby and Gary Klein are in that mix. Do you know who the electronics guru on the BASS Elites is? Aaron Martens is the top of that class. We call him the “Wizard” here at Wired2Fish.

Aaron Martens is known by his peers as the king of the meticulous. He can be eccentric and a bit in his own world at times, but rest assured, he is one sharp dude, a great stick and loves all things electronic. He is more like a NASA engineer at times than a bass angler. For example, he was installing a new high-end stereo with surround-sound receiver and modifying the internal software on it when we spoke to him.

He is a detail oriented guy, and to him, his electronics are his eyes below the water. He doesn’t just use them to find structure, but rather uses every detail to find “fish” and their quarry as well. Whether it be shad, shell or stumps, Aaron arms himself with the best, and he buys them. Today, he doesn’t have an electronics sponsor, he buys his own and spare parts as well,   but rest assured he knows more about what makes electronics effective than anyone else we have spoken to in professional angling. It’s what makes him tick!

We had a chance to sit down with Aaron to discuss his electronics, and why he uses what he does. Below is part one of a multi-part discussion. We will go over specific settings in more detail in parts two and three.

Editors Note: Aaron uses Humminbird but has had experience with Lowrance as well. He changed to Humminbird a few years ago when side imaging became available. Lowrance did not have it at the time but has since added Side Scan to their line-up as well.

W2F – How important are your electronics, and what determines what you buy?

Aaron Martens – I always try to own the best. I want the largest screen, and I want as much power as I can get. I like the larger screen, so I can see more detail, and side imaging and great sonar are a must. I used to own a paper graph, and these graphs today have as much detail as those old paper units did. Those paper graphs were the deal. I loved mine. For me the new electronics have to be super sensitive and have excellent definition. I choose the bigger screen because it’s so much clearer. I don’t have to squint to see them either. I depend on my electronics. They are my eyes under the water, and I can now look below the boat and to the sides equally as well.

My electronics are crucial to my fishing, and they have to be perfect. So much so, that I usually install my own. I want them re-enforced and protected and have a special way to do that. I always install my front graph in the center of the boat right in front of the trolling motor. I fish from both sides of the boat so I want to be able to see it equally well from either side. I am working on a console for the front that could be pretty cool too. Having it in the center makes sense on the bow.

On the console, I still think there is a better way to mount them. Some are in dash and some are put on a RAM mount but they are not easy to reach many times. I want mine closer to me so I can use a single finger to change settings etc. I want them mounted solid in the boat and close to my face and hands. I am working on something for the console too.

I make sure my transducers are set up perfectly for the best picture too. They have to be flat with the water so no air bubbles get trapped or under them. You get the best picture when they are flat and don’t forget that when you are moving it changes the angle of the transducer. For example when you are moving around 1-4 or 5 miles per hour the nose of the boat it up a bit. The angle of the transducer has to account for that to get the best picture. I have had great luck with transducers but they do wear out. If the picture starts to lose detail it could be the transducer and I will change them out if I see that. I carry spare transducers but have not had a unit failure in 4 to 5 years with the units. We also have the luxury of the service truck on tour, but I haven’t had a reason to use them yet.

W2F – Just about every boat on the water has electronics. What has been your experience level with how much people know about them?  What features do you use the most and why?

AM – I think most people do not take the time to learn them like they should. I have to be honest here and say there are also many pros that do not know their electronics as well as they should. I see a bunch of guys that are super good anglers but would be even better if they knew more about them.

When side imaging came out, I had to have them. I could now look under my boat and to the side at the same time. I can look under docks and more clearly define objects that hold fish that may be to the side of the boat or even in front since I have a transducer mounted in my trolling motor too.

I have several anglers that ask questions of me, and I love talking about electronics. The functionality and clarity of the new units is superb. I test everything on my units and am always messing with settings and screens. I tweak my settings all the time, from color, to screen speed, to sensitivity settings to transducer settings. All were designed to do something in particular, and that doesn’t mean you set them once and that is it. Bottom hardness, baitfish populations and types of structure are different all over and the settings have to be managed to get the best read.