We love to fish, and while catching fish is what it is all about, finding fishing is where we find the real reward anymore. There is nothing better than searching for good fishing spots off the beaten path and finding a place loaded up with fish and catching them one after the other. While doing that we encounter many cool things going on below the surface that we would otherwise be oblivious to without a good set of a marine electronic fish finders. Lowrance, Humminbird, Garmin and Raymarine have all really been getting after it the last few years in terms of pushing the technologies and advancements to give anglers better tools for finding fish. So we thought we share some cool captures as we close out 2016 and another great year of fishing.

I found this school of crappie hovering around an old brush pile on Kentucky Lake the middle of November. The crazy thing about this screen shot was I took this capture, AFTER I caught 35 crappie (20 keepers and 15 shorts) in about 45 minutes of fishing. That’s when you know you are on a good brush pile. You literally could not beat the fish off this pile in a couple of weeks of trying. I captured it with my Lowrance HDS Gen3 units with the new 3D Structure Scan transducer. 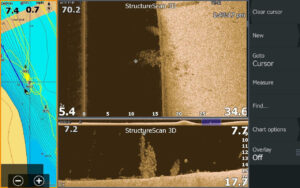 There is just something cool about fish on cover. And seeing the fish separated from the cover. But sometimes the fish make the cover seem more than it is. That was the case with this pile. It looks like the pile has leaves. When in actuality the pile is just bare smooth branches. Those are fish literally piled on the pile. Another quick limit of crappie came from this pile and off the bottom around it. Lowrance HDS Gen3 with Structure Scan 3D. 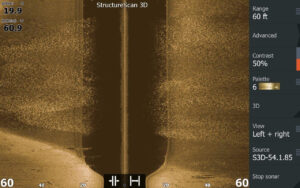 My next favorite thing to watch on a graph other than the fish I intend to catch or the cover they hide around is the baitfish on which they feed. Here is a great shot of massive amounts of baitfish or small asian carp on Kentucky Lake. Amazing how much they spread out in open areas when they are not being moved around by bigger predator fish or boats. Lowrance HDS Gen3 with Structure Scan 3D. 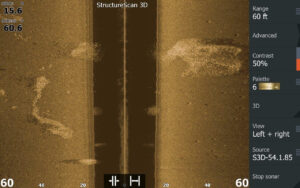 When they are herded by gamefish or boats, baitfish will ball up into tight schools and meander around in an area trying not to get picked off. It makes for some neat screen shots. Lowrance HDS Gen3 with Structure Scan 3D. 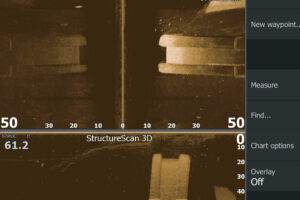 These were a few of the spotted bass I caught off a big bridge this summer that were suspending on baitfish. It was neat to scan around the pilings and find the fish setup on just one corner of the pilings and that would change throughout the day probably related to shad and how the schools of bait were moving through the area. Lowrance Structure Scan 3D with Gen3 Units. 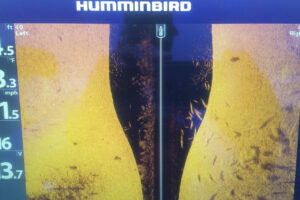 Terry Bolton captured this big school of gar on his Humminbird Helix units earlier this year.

Sunken Ship on its Side

Kevin McManus (L.A. Sonar) got this awesome shot of a sunken ship laying on its side on the bottom with his Raymarine unit. 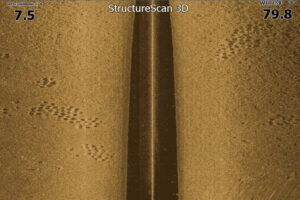 I use my electronics for all my fishing. Bass, crappie and bluegill. I find big beds of bluegills in the spring by scanning big flats in the backs of pockets. But one key I’ve found is to not stop and fish unless I see actual bluegills on the beds. Notices the dark circles of their beds in this shot and the white dots in the middle of them are big bedding bluegill in the actual bed. Lowrance HDS Gen3 Structure Scan 3D. 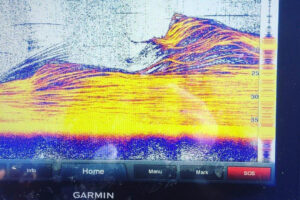 Elite Series pro Paul Mueller got this stellar shot of a massive school of white perch stacked up on his home lake with his Garmin unit. If you’re a northeast angler or just like cool fishing shots, he’s a good follow on social media. 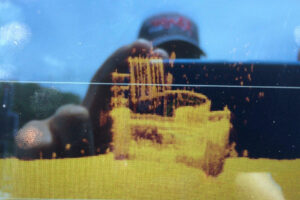 Terry Bolton found this boat sitting on the bottom with his Humminbird Helix units this past season.

Brush on Both Sides

Another detailed shot from Kevin McManus and his Raymarine unit of a ditch with brush stacked on either side on Gibson County Lake in Tennessee. 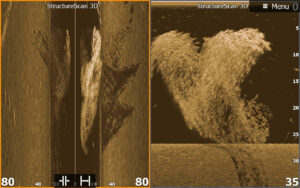 This shot reminded me of those saltwater documentaries where you see big sharks or whales herding massive schools of bait around. They almost dance in unison like an underwater ballet in slow motion. I thought this shot captured how baitfish move in a flowing mass throughout the water column. And pardon me but is that a heart shape of bait on the right.  I love you too.

Terry Bolton found this big school of bass on top of a high spot on a TVA ledge this summer. He said it was full of quality bass. In recent years these smaller schools have been the ones that had the right kind of bass in them. 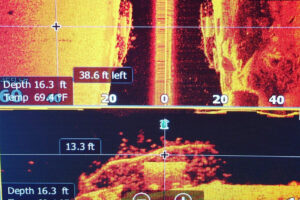 Crappie on the Cover

We saw this shot on Tony Burch’s Facebook page this fall and loved it. Such a detailed shot of crappie on a hard cover with a tree laying across it. Bet that was a fun day of catching! 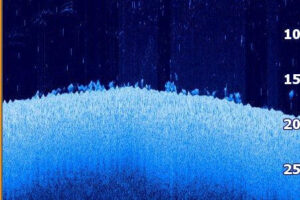 Bass in Current and Waves 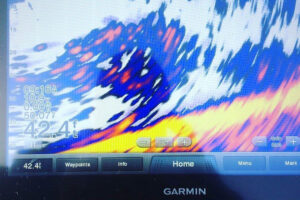 Another great shot from Paul Mueller, this time of the widely talked about new technology called Panoptix from Garmin. This new technology is forward looking sonar. Here Mueller marked a nice school of crappie in front of his boat and was able to cast ahead to them and catch them with pinpoint accuracy. 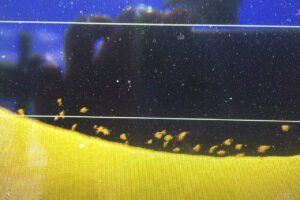 Bolton found another good school of big bass this time sitting on the bottom of a drop. It pays to scan up and down a likely looking spot from multiple angles because it’s easy to miss a brush pile or nice group of fish by a few yards.

Roadbed on the Bridge

Finding road beds is a good way to really learn what your electronics are showing you with side scanning technologies. The lighter or more dense the return, the harder it is. The darker or more faint it is, the softer the bottom when you’re talking about rocky or muddy bottoms. The hard edges are a solid giveaway as to the makeup of this road bed. 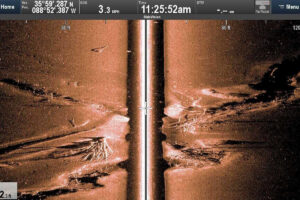 Another great shot from Kevin McManus on ditches with trees laying in and around them. 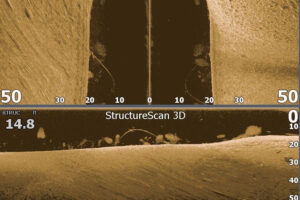 This is a pretty simple shot but it’s very telling. Notice the schools of bait. Then notice the voids in the middle of them with just a solid dot in the middle. That is a bass running through the school and plucking off individual bait and scattering the centers of the schools. All suspending around a dock cable extending out from a floating dock in clear water. 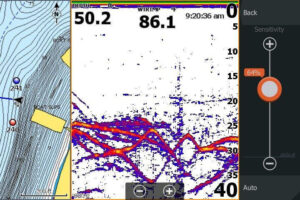 It’s been a banner fall on Kentucky Lake for crappie fishing and large part of that is because the crappie have loaded into the deep brush piles this fall and winter. I’ve caught more fish off of piles I’ve found just this year than any fall in the past. It pays to spend the time learning your electronics and tuning them up and down until you get a good picture. Scan lots of different depths, bottom substrates, different forms of cover and keep tweaking to get the best images. This was taken off my front unit while on the trolling motor fishing vertically for these fish.