Late last fall or maybe early winter depending on what you call cold, I was fishing a channel swing bank with a variety of baits and having some success. The bite seemed a little odd where I felt more like my bait was bumping into fish rather than them coming up and biting it. As luck would have it I had an unfortunate incident turn into a fortunate incident.

My crankbait got stuck on an underwater laydown on a sharp break. After trolling up to the branch and dislodging the crankbait, I backed away from the channel break and noticed five or six big “yellow” arches on my Lowrance HDS 8 unit. I took a quick screen shot and kept backing away. As you can see the bank drops rapidly at about 45 degrees into the channel. The fish were positioned down the break and suspended just off the break. I thought if I could bring a bait down and then across over their heads I could catch them maybe. Hopefully at least get a few of their attentions.

I fired a Megabass Ito Vision 110 up to them and started it down the break and then jerked it out across them. First cast and I was hooked up with a large bass weighing more than 5 pounds. Next cast I had a solid 4-pound fish. Next cast was another fish weighing more than 5 pounds. Then a 3 pounder. Then another 4 pounder.  In five casts I had caught more than 20 pounds of bass. The thanks goes to being observant of my graph and understanding when I saw those several yellow arches suspended over the break, that I needed to change my approach.

Notice the bait above them in 4-8 feet of water. They had to be looking up for my offerings. I think with the crankbait, I was going underneath the bass and missing the boat. But when I switched to a bait that went above them and they were looking up to eat, and that first bass triggered, the rest of the bass started feeding too. It only lasted for about 15 minutes but there weren’t that many bass there I don’t think.

When using color depth on your Lowrance HDS units, you can tell when a signature is a small fish and a large fish. You can tell when it’s bait or brush. Learning to interpret the color will make you a better fisherman.

The general rule is the harder the bottom, the brighter yellow it will be. The softer the bottom the more red or blue it will be. So when you’re looking for hard bottoms that bass like to relate to, you will see it change from Red/Blue to more yellow when it turns to rock and shell beds. Same thing for the fish. When you’re marking shad isolated here and there, you will see red and blue with a little yellow if they are grouped densely together. But when you see a larger game fish, it will have more yellow to it.

The guides down on Lake Fork have been calling those big bass on the bottom “Yellow Bellies” for years, at least that’s where I first heard the term. So when I see arches that look to be the right length and height on my graph that are yellow, I get a little excited. Keep in mind you’ll only see arches when you pass over stationary fish. IF you’re sitting still with a fish underneath you, you’ll generally see a red line on the graph.  Also when you see arches that are larger and on your sonar they appear to have moss or something draping off of them with red noise below them, those are typically larger rough fish in my experience like carp and gar. For some reason their hard scales give off a lot of noice so they almost look hairy on your sonar return.

This is just a quick tip on paying attention to your graph, noticing where the bait is in relation to the bass and looking for color density when trying to find bass. The shallower water you get in, the more you might want to turn your sensitivity down as it can be overbearing. Like wise, when you get in deeper water, you might want to bump your sensitivity up a notch to give you a better color separation on shad and game fish, soft bottoms and hard bottoms.

Your pings are much stronger in shallower water, whereas the more water it has to pass through, the more signal strength you’ll want to have. 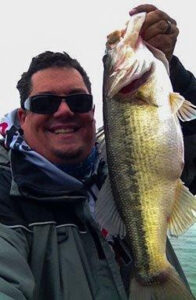