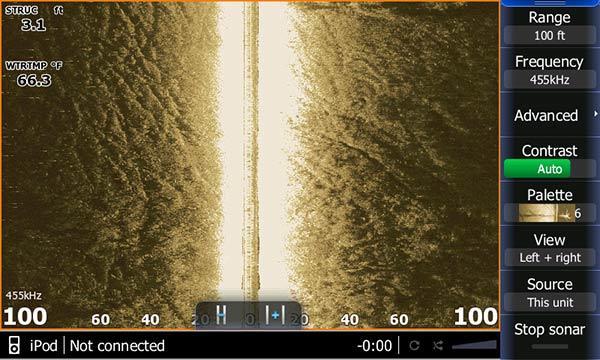 Lowrance unveiled the latest iteration of the their popular HDS Fishfinder / Chartplotters yesterday. The new Lowrance HDS Gen 2 Touch had lots of gear heads like us “oohing and awing.” Todd Hammill and Scott Glorvigen have in fact had the units in house for a couple months now testing and filming for Wired2fish TV. Lowrance Dealer Service and New Product Validator, Chris Meyer has had the units since June and spent some time with us yesterday going over the features he’s come to love on the new units.

“The Touch Screen units have been a 2-year project,” Meyer said. “There were a lot of things we wanted to incorporate into these units that would be great improvements over anything else out there. These things work when wet; they work when it’s freezing cold; finger prints don’t affect the viewing; they’re perfectly viewable in bright sunlight, with sunglasses on; it doesn’t matter. I have yet to find one thing I don’t like about the units, and I see a lot of units.”

Probably the most endearing attribute of the new Gen 2 Touch units will be their ease of use. The fact is we live in a smart phone tablet era, where when we get cluttered or confused, we simply hit our home key to take us back to the main menu again. The way we move around on our smart phones will translate intuitively on these new units. Touch the screen hold down and drag things into place, stretch and zoom, draw boxes to highlight areas, swap screens around, and more will be much simpler now with the Gen 2 Touch units from Lowrance.

There is a lot of automation built into these units too. The displays are some of the clearest we’ve ever seen. Their is some built in automation as well like auto contrast. Those of you that scan a lot with Structure Scan know that as you scan deeper you have to bump up the contrast, but then as you come shallower your screen gets blown out so you have to back the contrast way off. Now the units detect that blowout and auto contrast for you. Couple that with its auto speed sensing ping and you’re going to get the best tweaks to your units automatically so you’re always getting the best picture in your Down and Side Scans. 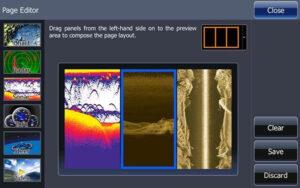 The units come with their 4-way sonar and popular Track Back Feature so you can back up your viewing and drop waypoints on items you see on your scanning or using sonar. Then new features like exporting regions is going to be very handy for organizing files and such if you fish a lot of different bodies of water. With this function you can draw a box around the area you want to save and then export just the waypoints, trails and such in that region to a file set. So if you fish a body of water, you can mark your spots and save your waypoints and trails for just that body of water.

The form factor of the units change to a more wide display. They removed most of the key pads allowing for a wider viewing pane with the same hardware footprint. What you’re getting with the HDS Gen 2 Touch 12-inch unit is the largest screen Lowrance has ever made with the best viewing ability you’ve ever had. 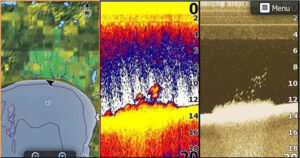 Because of this wide footprint, you have some more options for screen splits like three screens split into three equal vertical panes or two stacked on one side with a full pane on the other side. Sizing is as simple as two button clicks and then just drag your lines into place. The ease of use for configuring your units is the best we’ve ever seen.

The price points seem high until you compare them to current offerings. Because you have to buy Gen2 HDS units currently separate from LSS2 Structure Scan boxes there is an added cost there. But now you can buy these new units, like the HDS Gen2 Touch 7 with the whole kit, structure scan ready out of the box for basically $200 more than you would pay for a Gen2 7 and Structure Scan now.

The 9-inch and 12-inch HDS Touch models are going to have dual Ethernet ports, NMMA port, Power/video port, Structure Scan transducer direct port, and Built-in Broadband Sonar port. From that you could run an Ethernet cable to your front HDS Gen2 Keypad unit and network them together. So upgrades are going to be slick with a lot less components like expansion routers.  The HDS 7 Gen 2 Touch will only have one Ethernet port and no video capability.

The video capability will be slick for folks that have underwater cameras and clear water. You can hook your camera from its video output into an adapter cable that feeds into the power on the back of the unit and port video right into your unit. 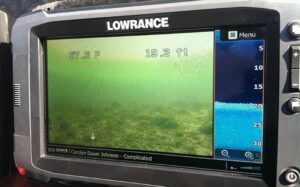 All in all, we’re very intrigued and excited with these units. The ease of use, improved waterproof design, better viewing in all light conditions, especially direct sunlight, auto correcting functions, and quick installation and networking are going to make these units a welcomed addition to savvy anglers fishing boats. We live and die on the water with our electronics and all the technology that is assembled in these news units enhances the search process greatly.

For more about the new Gen 2 Touch units from Lowrance, visit their new and improved website at Lowrance.com. 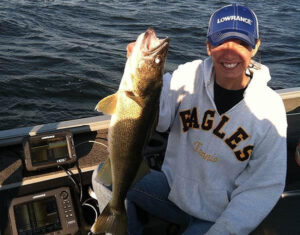