Nowadays a bass boat can look more like a Black Friday sale at your local TV store than a fishing boat. With multiple electronic units reading sonar, Side Scan, and Down Scan, it is very easy to get overwhelmed. Still, it seems that everyone from your professional bass angler to the weekend recreational fisherman now has $1000 – $3000 in electronics on their boat.

There are a lot of people that own these electronics that couldn’t tell hard bottom from a stump, or a fish from clutter on the screen. So we wanted to hopefully clear up some things on reading your electronic fish finders with savvy professional angler that has done his homework when it comes to electronics.

Recently, I had the opportunity to sit down with FLW Tour Pro Tom Redington and listen to some of his insights on utilizing his fish finders. Redington flourished in recent offshore tournaments thanks to his prowess with his electronics and finding deep schools of bass. In the 2014 FLW Tour Event on Kentucky Lake, Redington led days 2 and 3 of the event before finishing in 6th place, and he did it all through intense scanning with his electronics.

Here he offers up some knowledge on how he sets up his Lowrance HDS units and how he deciphers what he is seeing with them.

Keep it simple and consistent

Redington likes to keep it as simple as possible when he starts playing with his electronic settings. He will shut off all the factory set filters on his electronics. Not that these units aren’t ready to go right from the store. In fact, Redington believes today’s Lowrance Down Scan and Side Scan technologies are so good that almost anyone can pull them out of the package and be able to find and catch fish.

However, he takes these simple steps so that he can distinguish everything he sees on the graph himself. The filters do a lot of assuming and can be fooled by false returns from the sonar. Redington insists this will lead to you being much more knowledgable and efficient when looking at your electronics.

“To me, the most important thing about graphs that people need to understand, is that there is no one correct setting,” said Redington. “It’s not like there is a perfect setting, there are a lot of wrong and right ways to set them up. But you really just have to find something that works for you and stick with it. Once you get them set up and you start looking at different structures, a consistent look becomes critical. That way, if I see a certain type of bottom, or structure or the way a school of fish is set up, I can tell immediately what it is and if I can catch those fish or not.”

Redington also keeps it relatively simple when it comes to color palettes for his electronics. He has found two different color settings that he gravitates to, one for Side Scan and another for Down Scan. Redington uses these color schemes because they are what he is accustomed to and they are the most easily recognizable to him.

“I usually go with the red/yellow/purple scheme for Down Scan to differentiate fish from cover. Whereas in Side Imaging, I like that brownish scheme, as I am looking for structure or actual bottom contrast,” Redington said.

Once you hit the water with your electronics, you run into a whole host of details to decipher. Most notably, how to recognize and discern between schools of fish when graphing offshore structure. Redington not only can distinguish schools of fish with his electronics, but he can usually tell what species of fish they are, and even if he is likely to catch them or not.

“It’s almost the same thing as sight fishing,” he said. “If you have sight fished a lot, you can immediately tell when you pull up to a fish if it is going to be easy to catch them, or if you are going to have to spend a lot of time working on that fish. It is the same with your electronics once you understand.”

There are three distinct school formations Redington looks for and recognizes when bass move out to their deep haunts. 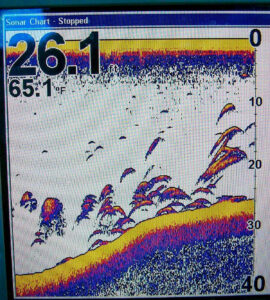 This is what Redington wants to see when graphing for bass, what he calls “attack position”. Notice the vertical formation to the school of fish. Redington says this is the most important thing he looks for when graphing for an active school. The fish are in a tight group with a vertical formation, but still relating to the bottom. When you see a school like this, Redington says you can throw most any lure to them and expect to get a bite.

“These fish will still be relating to the bottom somewhat, but they are grouped in a sort of mound, or haystack formation. If you have a ledge, point or a hump, these fish won’t be all over the whole structure. They’ll be in a tight little wad, within five feet of the bottom, with some vertical formation to them. When you see a school like this, you had better get up and get casting. It’s time to load the boat,” Redington said. 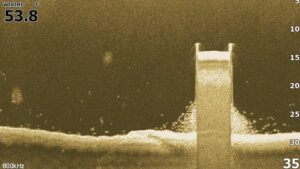 Here the school of fish is scattered across the bottom, not really in a group per-say. There is a large ball of baitfish grouped under an old bridge in the middle of the image; but you’ll notice the larger fish, in this case bass, are spread out to the left and the right of the baitfish.

These fish are sucked right down to the bottom and spread out evenly in what Redington refers to as “wall-to-wall carpet” formation. Redington suggests soaking a bottom bait on a slow day to catch a few stragglers or to hopefully get the school fired up. He also suggests leaving this school and checking back later. As he can often catch more in 10 casts out of an active school, than he could in 5 hours of fishing on a school grouped like this.

“It’s like playing a slot machine… you only have to hit jackpot once a day to make it a great day.  Definitely stop back again later in the day though, as this is a timing deal. Sooner or later this group is going to get together and eat.”

Even though an “explosion” of fish on your graph may look and sound like an enticing thing, Redington believes differently. He notices that the fish and baitfish are spread out in all directions, with no true formation of any kind.

“When I come across a school like this, I’ll come back later and see if they all group up together in a small area relating to the bottom, but I won’t waste a cast now,” Redington said. “A lot of beginners tend to see this and spend a lot of time on a school like this, but it is extremely hard to get a fish to bite when they are set up this way. I tend to see this formation a lot on post frontal days. If I see this formation on 4 or 5 spots in a row, I’m going to start thinking about a shallow backup plan.”

Redington’s tactic to finding bass on offshore structure is to first slowly idle over the structure with a zig-zag approach. When he starts to graph schools of fish he believes are bass, he will make a few casts to confirm his notion. Once Redington knows that there was a school of bass in say, 20 feet of water, he can narrow his search. If bass are offshore, they will typically inhabit similar depths throughout the lake, river or reservoir.

“Once I have an idea of what depth to look for, I will go back to the map and find as many structures with a lot of area in that productive zone as possible,” Redington said. “Say I found a few schools of fish on sloping points in 14-17 feet of water. Well, I now want to find as many points as possible that have a lot of area in 14-17 feet and give them all a look with my electronics; applying what I know about school formation to what I see. This eliminates so much water and lets me zone in on the most productive depth.”

This process lead Redington to being extremely efficient when looking for schools of bass during a short practice period, and he does it all by keeping one eye on his electronics. 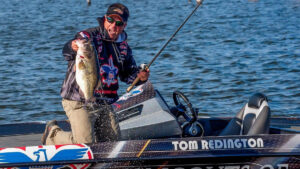 Redington makes a living fishing for bass, but these insights can be applied to using electronics to find any species of fish. Electronics are so good these days, it is scary. Even a novice angler can use modern electronics to find a mega-school of fish. You don’t have to be intimidate by high-end electronics. Follow a few keys to understanding and interpreting your graphs will make you a more well-rounded and successful angler in any capacity.