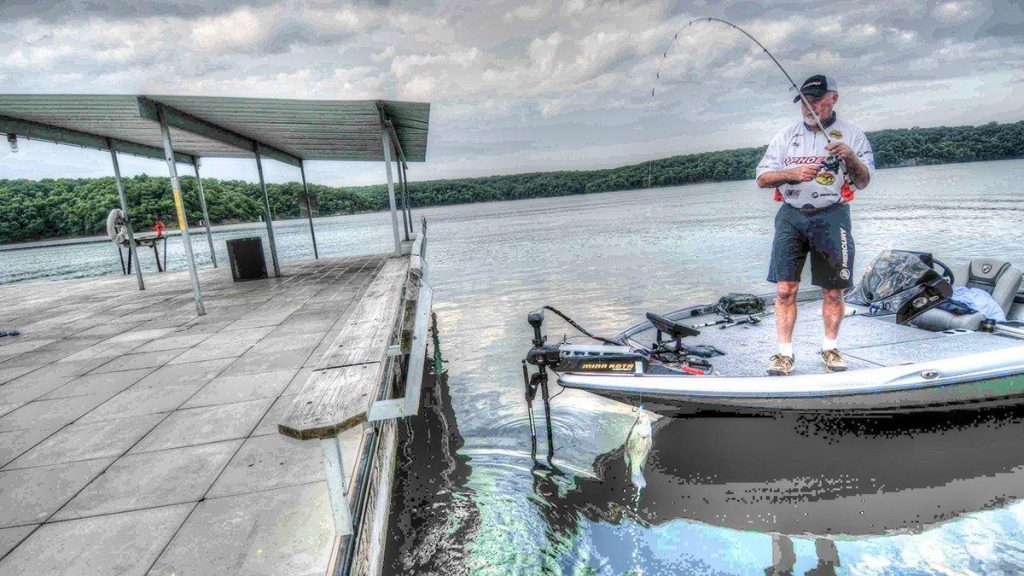 When fish settle into the wide-open expanses of deep water during the summer, Lake of the Ozarks guide Terry Blankenship relies on his Humminbird 360 imaging system to pinpoint the crappie.

The Missouri angler mainly vertical jigs along bluffs and ledges or shoots docks for crappie in the summertime. He previously used side-imaging technology to find crappie in deep water, but now he favors 360 viewing over side imaging. 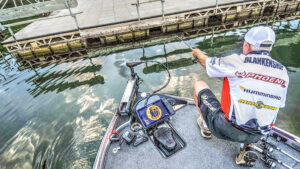 The 360 Advantage for Crappie Fishing

“When you have side imaging you just scan whatever is in that scan line as you drive the boat,” Blankenship said. “Most of the time it is behind you, so the advantage of the 360 is that you can see fish in front of you while you’re up fishing on the front deck.”

“One huge advantage of using 360 around docks is to be able to keep an eye on where the fish are at because the fish tend to roam back and forth under a dock a lot of times,” Blankenship said.  “So there have been times when I have fished and thought I had caught them all or they quit biting. Then I would pay attention to my 360 and notice they had moved.”

Blankenship has seen on his 360 when crappie have moved away from him to the other side of a dock after he had caught several fish. “So I would go around to the other side and find them on my 360 and start catching them again,” he said.

Since he never uses an anchor, Blankenship depends on his trolling motor to stay on top or within casting distance of crappie schools.  While waves or current can make it difficult to keep  his boat in the right position, Blankenship  looks at the radar-style imaging of the 360 to cast accurately to a piece of cover or a school of suspended crappie.

The veteran crappie angler also notes the 360 imaging shows him if the cover or crappie school is at a 90-degree or 180-degree angle from the nose of his boat. “It is just a huge advantage to help you find the direction you need to cast.” Blankenship said.  “So basically what a 360 can do for you is keep the fish pinpointed for as long as they stay within range of your unit’s reach.” 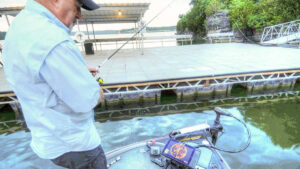 For best viewing results, Blankenship manually adjusts the settings of his 360 system and always favors dialing on the high side. “I would rather run my settings higher than lower,” Blankenship said. “Water conditions sometimes dictate what I want to do (with the settings).  One of the tricks of trying to figure out how to do the settings is once you spot something on the screen just freeze the screen by hitting the cursor button. Then just starting messing with your settings a little bit and see which way gives you the best detail.”

Blankenship recommends adjusting these features of the 360 system rather than using the default settings.

The auto setting for sensitivity is 10 on a scale of 1 to 20 so Blankenship usually starts at 13 and adjusts to a higher setting if necessary.

Blankenship also starts at the same number (13) on the contrast scale as he does with sensitivity.

The Missouri guide usually sets the range of his 360 system at 60 feet for the best results. “If you are looking too wide everything is so small that you miss some detail,” he said.

Although not a setting on the 360 unit, the speed of your boat while scanning with 360 will also enhance or diminish the images on the screen.   Moving too slow or too fast will blur the imaging so Blankenship favors idling his boat at 3 to 4 miles per hour for the best readings. 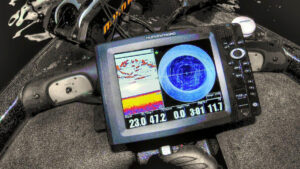 Combining 360 with sonar and side imaging

Blankenship frequently splits the screen on his Humminbird unit to watch both the 360 imaging and sonar so he can get a better idea of the depth under his boat and how deep crappie within his casting range are suspended.  One of the disadvantages of the 360 imaging is its lack of clarity compared to side imaging, according to Blankenship. So if he wants a clearer image of a piece of cover or details under a dock he was radially viewing, Blankenship will scan the area with side imaging next.

During his guide trips, Blankenship notices his clients who own side-imaging units are puzzled by the 360 image they see on the screen.  “The image is different (than side-imaging), “he said. “It is looking twice in a circle at things the whole time and it blurs things differently. There is just a different look that you have to get used to with a 360.

“The best thing you can do drive over a familiar underwater object or spot you know, whether it is a brush pile or rock pile or a point. “Go out there and cruise around it a little bit and get a feel for what things are looking like.”

Then you will be ready to track down those summertime crappie in the deep waters of your favorite lake. 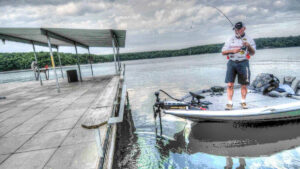