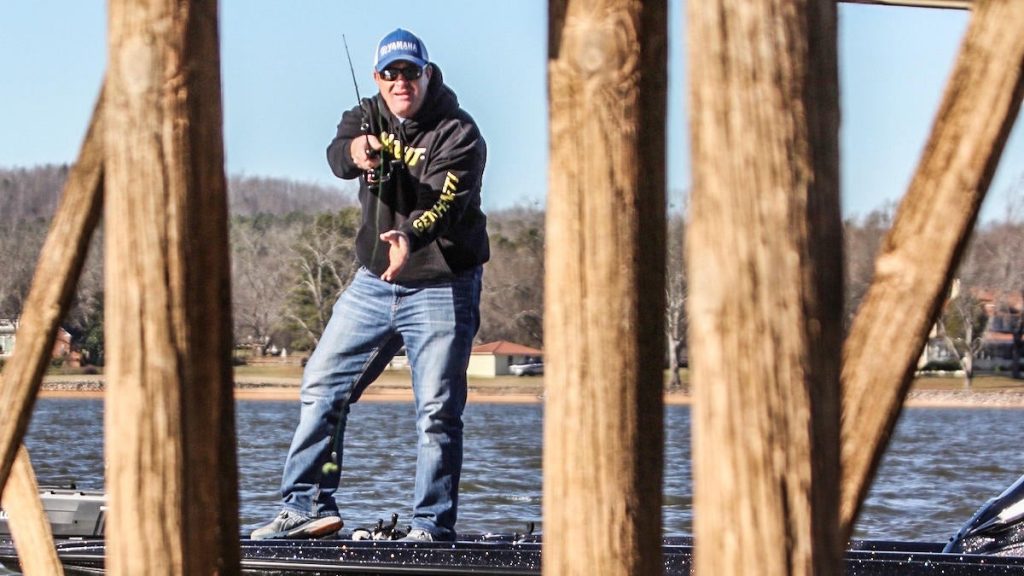 “Shooting docks for crappie is just fun man,” Canterbury said. “I love it. You shoot that thing in there and let it sink and they knock the fire out of it. I just love it. We’ll catch a hundred some days doing it and 50 sometimes off just one dock.”

So what exactly does “shooting a dock” mean? Well, it’s fairly easy to pick up and in itself, pretty cool. Canterbury takes a little 5-foot spinning rod, bends the rod by pulling back on the crappie jig and then releases the bait which lets the rod unload and fires the bait way back into places no one could possibly reach with a traditional cast.

“The trick is to let the jighead go a split-second before you take your other finger off the line at the reel.”

Gaining access to untapped water this way opens up a world off fish catching possibilities. Crappie stage on docks in a very particular way. They’ll often group tightly together and relate to one piece of cover, dock post or the darkest patch of shade.

“That’s the deal with shooting a dock,” said Canterbury. “You can cast all around it, but you can’t cast it back in there to the darkest shade or that particular piece of cover. Sometimes I’ll fish a massive dock with 15 poles under it and I’ll catch all the crappie on one pole.” 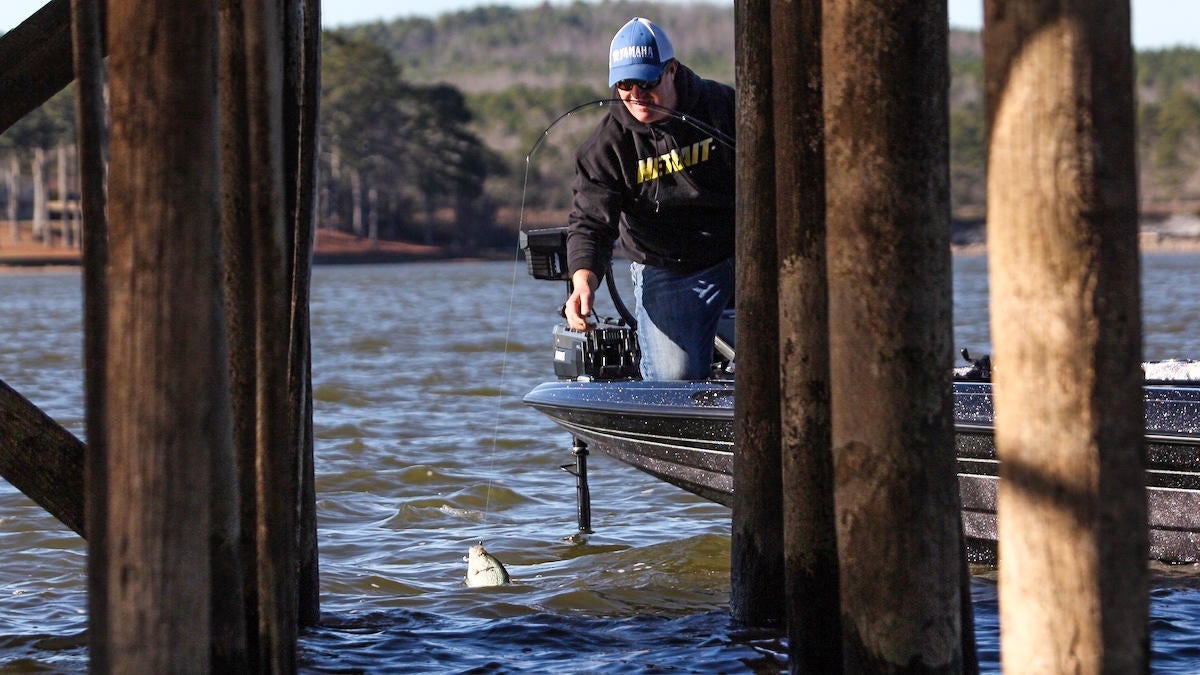 Which docks are holding fish changes day to day, so it’s a process of elimination. But once you find them, you can set up shop for a while and catch several on one dock.

Floating docks can be a little more reliable at times, especially on lakes with a winter drawdown where the shade of a pole dock moves a lot throughout the day. Because they’re so close to the water, floating docks produce more consistent and darker shade.

Depth is another variable that changes day to day, but there are some generalities that Canterbury has noticed.

“I’ve caught them from 3 feet deep to about 18 feet deep shooting under docks, but the 6- to 10-foot range seems to be where I catch most of them. If the water is a little clearer though, you may have to go to those deeper docks.”

And the water does need to be fairly clear to catch crappie, according to Canterbury. Not necessarily crystal clear, but certainly not chocolate milk either. A little color to the water is fine, but you have to keep in mind how important visibility is when you’re fishing this way. The baits Canterbury uses are very small, and give off little to no vibration. So water clarity is important.

The depth at which the fish suspend also varies quite often, and is another thing Canterbury has to experiment with to find a concentration of fish.

“Most of the time my approach is to let the bait go all the way to the bottom and then fish it back. If I don’t catch one pretty quick doing that, I’ll count it down halfway to the bottom and then start fishing it. Then there are times where I’ll throw it in and just start fishing it back about a foot deep. It just something you have to play around with to find them. But I’d say 80 percent of the time they’re down around the bottom.” 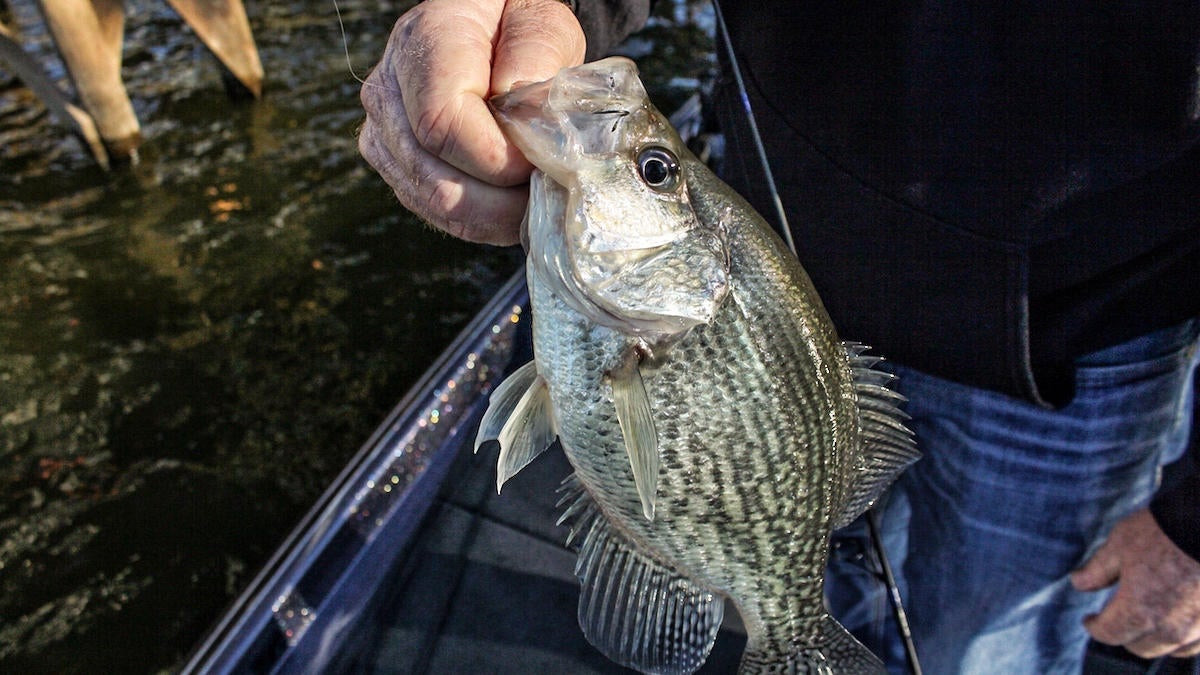 “The 1/16-ounce jighead is my favorite because it’s the easiest to fish. But if it’s really calm or really clear or if it gets really cold, they seem to like those lighter jigs. There are times when that 1/32-ounce is really good and it’s all they’ll eat. It’s just really slow.”

Canterbury prefers a short rod with a soft tip for shooting docks but it does need to have a little back bone.

“You can get a rod that is too flimsy and it will effect your accuracy. It’ll actually spring up too far when you release your bait and make the bait go up.”

When the rod unloads, you want it to basically straighten out. You don’t want a rod with a parabolic bend because the rod will oscillate too much and that upward swing will cause your bait to shoot upwards into the dock instead of straight under it.

Line size is also critical simply because the baits are so small. You can’t effectively shoot or fish them on heavier line.

“4- to 6-pound line is all I use when I’m shooting docks. I can shoot it a little further with the 4-pound test and be a little more accurate. But the 6-pound test can still get it in there pretty good and if you get one around a pole he’s a little less likely to break you off.” 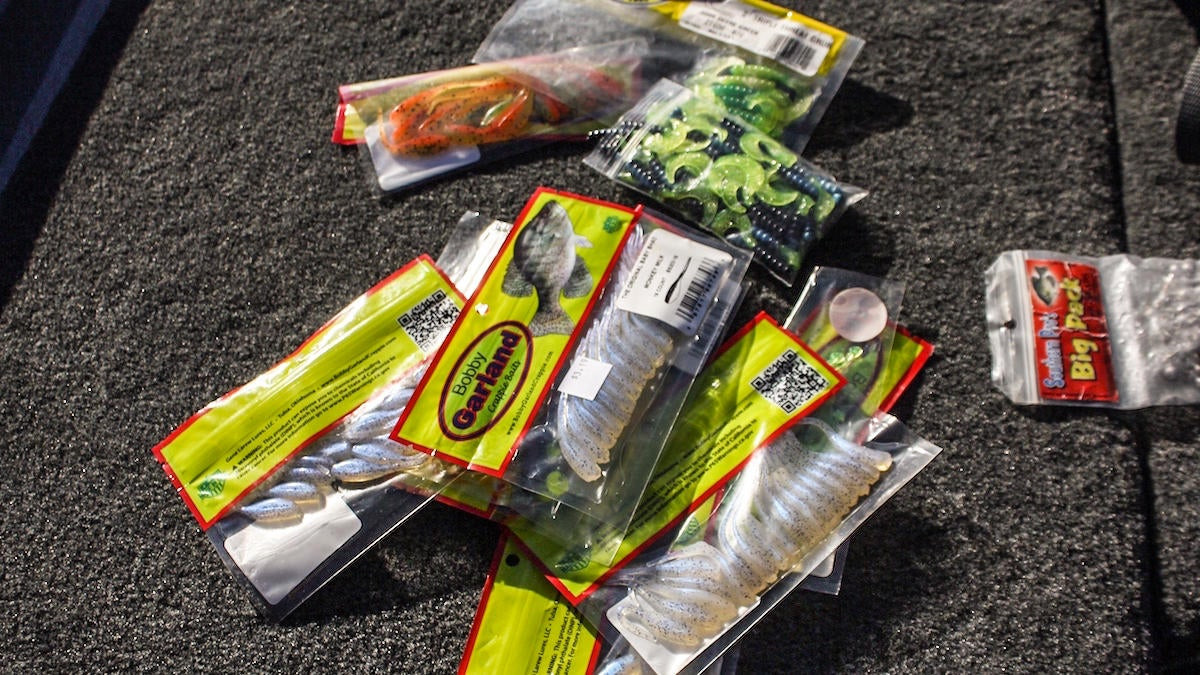 There are a lot of baits out there that will work for this style of fishing and Canterbury has sampled quite a few. One of his favorites is the Bobby Garland Baby Shad in Monkey Milk.

“Colors are something that everybody varies on a little but everybody knows about Monkey Milk. It’s really good in clearer water.”

Canterbury also uses a curly tailed grub a lot. More specifically, a Kalin’s Triple Threat Grub. And most of the colors he likes have a chartreuse tail.

“Color selection is mostly dependent on water color, but it makes a difference if it’s cloudy or sunny too.”

On cloudy days or in muddy water, you want to go with the brighter colors. On sunny days or in clearer water, the more translucent and natural colors seem to shine.

“I know that color makes a difference because we’ve fooled around with it a bunch. The Monkey Milk one is my favorite. Patriot and Tuxedo are really good. Cajun Cricket. John Deere Green. Barbecue Chicken. Ice blue is one of my favorites too when the water’s really clear.”

The names of these colors are almost as fun as fishing with them can be.

But at the end of the day, the most important thing is accuracy. I found that out first hand on our trip, as Canterbury put on a clinic and I struggled out of the gate to get the hang of it. But after awhile, I was able to get the bait into the strike zone; about 25 feet back under a dock and within about 15 inches or so of a couple particular poles. Of course, I caught a few slabs right quick.

They do knock the fire out of it. And I can now attest to the allure of shooting docks that puts such a twinkle in Canterbury’s eye. It’s fun. And action packed. And a little stressful with the light line and little rod. It’s all the things that fishing is supposed to be. So whether you’re a seasoned crappie angler who’s never tried it, a hard core bass guy like myself or anyone who enjoys fishing at all, I highly recommend giving it a shot. Literally.