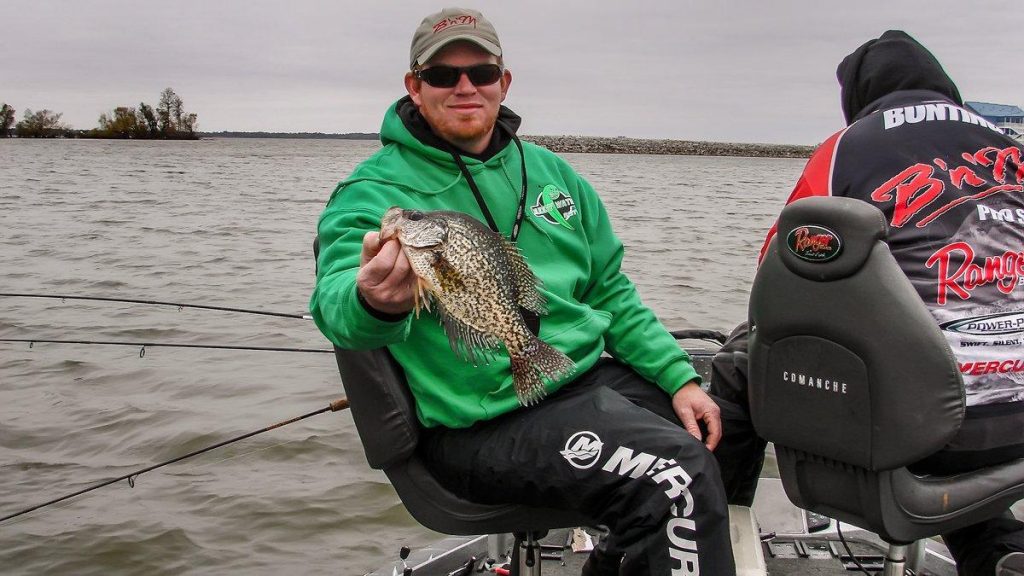 Most serious crappie fishermen change their tactics with the seasons, not because they want to, but because the body of water and target species necessitate it. However, some anglers find something they like and stick to it. Not all tactics can be successful all year, but long-line trolling is one crappie fishing exception.

Anglers generally long-line troll, or “pull,” by securing rod and reels in stationary rod racks and letting line out behind the boat, pulling 1/32 to 1/4-ounce jigs at various depths and speeds through likely areas with a trolling motor.

The 2-time National Champion team of Travis and Charles Bunting are far from one-trick ponies and have utilized about every tactic in the book to catch crappie, but they claim long-line trolling as one of their favorites because of its effectiveness all year on any body of water.

“Long-lining is basically casting and retrieving, but you’re letting the boat do the cranking, and you can use multiple rods to get more baits in various depths and spreads to increase your chances of catching fish,” said Travis Bunting.

Long-line trolling can be successful during all four seasons, but adjustments are necessary to match the mood of the crappie. Here are tips for each season:

“We like to target balls of baitfish that are broken up,” Travis said “That lets us know crappie are actively feeding and disturbing those baitfish. 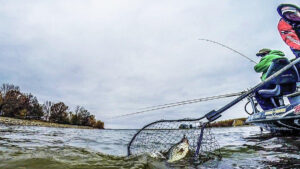 Long-lining can be done in nearly any water, with the only snag being, well, snags. In areas with heavy cover, keeping the baits just above the cover is key for both catching fish and avoiding hang-ups.

The Buntings always start out at 0.8 mph and have found that this speed will work most of the time. If the bite is inactive, they will make “S” curves with the boat. This reduces the speed of the lures on the poles on the inside of the “S” and increases lure speed on the outside. If they pick up fish on one or the other side they know if they need to slow down or speed up.

Depth is determined by speed, length of line out, lure weight and drag. While there are formulas that will give exact directions to attain a given depth with any size lure, the Buntings, like most, take a simpler approach.

“I’ll take the inside pole and cast it out behind the boat, then pull one arm’s length (about 4-foot) and flip the bail. On the second pole, I’ll pull 2 arm lengths and 3 on the third. This gives us enough variance combined with speed alterations to hone in on the fish.”

If their baits are hitting the bottom or snagging on cover, they’ll reel up until they’re above it. 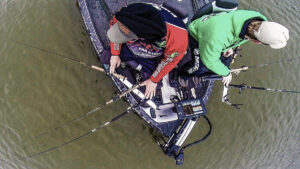 Setting up for success

Gear does not have to be complicated for long lining crappie. Here are some suggestions from the Buntings to get you started.

Long-line trolling is a fairly simple tactic that can be employed on lakes and rivers all over the country during all four seasons. These tips hopefully will help you put crappie in the boat all year long.