Typically, when someone tells you they’re taking a blade to the grass, you’re thinking the lawn needs a trim. Well, Bassmaster Elite Series pro Brett Hite’s not talking about lawn care â€“ he’s targeting big, ripe largemouths that have invaded the sparse grass of southern shallows with bladed swim jig.

In truth, the scattered patches of aquatic weeds burgeoned by warming spring days can easily serve prespawn habitat needs, as well as straight-up bedding grounds. But first, consider this establishing thought on why this scene suits the bass’ interest.

“If you have just solid grass, fish are not going to spawn there because it’s too dense,” Hite said. “They like the isolated grass with holes in bottom; it’s a great place for the fish to spawn.

“They have the protection of grass and they can be right up against the edge. It’s that warm-and-fuzzy feeling where they know they’re safe.”
In terms of prespawn staging, Hite points out that sparse grass creates strategic ambush points for nearly-ready fish that want to pack on a little more weight before the spawning fast. With crawfish, bluegill and other forage also traversing the grass, it’s like a waiting room with a well-stocked vending machine. Nothing to do but eat.

Depending on bottom firmness, Hite finds that prespawners utilizing shallow sparse grass may not move very far to spawn.

“I like to stick my rod down and feel what kind of bottom it is,” he said. “If it feels like gravel, or hard sand, I know that the fish will probably spawn right in that area.

“If it’s mucky and you get a bunch of mud on the rod tip, that’s probably not the spot where they’ll spawn. They want to find harder bottom.” 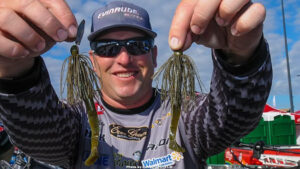 For prespawn applications, the bladed jig is a simple premise: mimic prey fleeing through the grass. Staging bass are in a full-on food mood, so the flash and vibration triggers quick reaction bites.

For the spawn, this probably isn’t the best option for sight-fishing a big bed fish in a foot of water, but in the sparse grass fields, it’s deadly.

“When you have fish spawning in holes within the grass, you can’t necessarily see them,” Hite said. “If you have a pretty good idea of where they’re spawning, you can reel that bladed jig through the grass without snagging and give them a reaction look.”

Even when visibility allows you to get eyes on the prize, clarity may fluctuate with daily weather. That’s another reason Hite likes the bladed jig.

“Say you went into an area where you were able to see the fish in sparse grass, but a front stirs up the water and you can’t see them any longer. The bladed jig is a good fallback pattern for whatever you were using to sight fish them.

“Even if you can see them on calm days, you have a backup pattern with windy days. And we know that bass tend to react more on breezy days.” 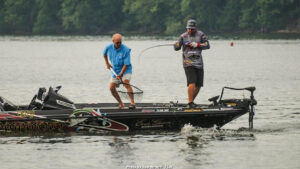 When he’s searching for subsurface sparse grass, Hite relies heavily on his Humminbird 360, which shows him a sonar image of what he’s approaching.

“I can see where the grass is and how dense it is before I get to it,” Hite said. “There’s no other technology that allows me to see ahead of my boat and that’s important for lining up the proper cast.”

Essentially, Hite said he wants to target the shady side of the grass because that’s where the bass will position most of the time. He also wants to make his bait to impact the edge of the grass and erratically deflect off, similar to snagging and ripping a lipless crankbait.

Hite typically expects his bites to come at that moment of contact or deflection, but if a cast fails to trigger such instant response, he has one more trick up his sleeve.

“If I pull my bait by the grass and it doesn’t hit anything, there might be a bass there that didn’t react to it,” he said. “If I believe there’s a bass in there but I don’t get bit when my bait goes past, there might be one following it. So, once my bait passes the grass, I’ll give it a couple of erratic jerks and that might trigger a fish that’s following the bait.”

Hite expects to find the fish hunkered down in the sparse grass on sunny days, but cloudy conditions usually find them roaming the edges. The bladed jig will catch fish in either scenario, but positioning affects presentation.

“On sunny days, I’ll use a tighter roll cast to pinpoint the shady sides, but on a cloudy day, it’s more fan casting,” he said. “You just have to get it around the grass when it’s cloudy, but on sunny days, you have to be more specific.” 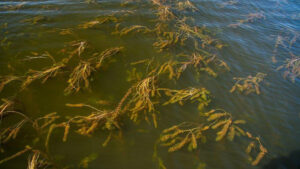 During the prespawn, Hite uses a ½- to 3/4-ounce bladed swim jig because he wants to make sure his bait makes contact with the grass, just like a lipless crankbait. During the spawn, if the fish move shallower, he likes a 3/8-ounce bait.

On the back end, Hite fits his jig with a Yamamoto Swimming Senko. He’ll go with a 4-inch bait for the spawn, but in prespawn scenarios, he’ll use the 4 1/2-inch version, or Yamamoto’s new Heart-Tail swimbait â€“ also 4 1/2 inches.

“The fish are trying to bulk up in the prespawn, so they like those bigger baits,” Hite said.

Day in and day out, green pumpkin is Hite’s go-to trailer color because of its resemblance to much of the finfish forage in southern lakes. When later spring finds the tail end of the bass spawn overlapping shad spawns, he might mix in a lighter trailer color to tempt finicky bass.

“A bream colored bait is key,” he said. “Anytime a bream gets around a bass bed, the bass will run them off or eat them.”

Whatever package he throws, Hite keeps a 3/8- to 1/2-ounce swim jig handy as a back-up bait. He’ll use the same trailers and fish the more subtle bait in slick calm conditions when the fish avoid don’t like a lot of action. 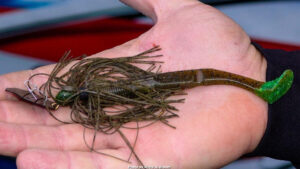 “Right out of the pack, I’ll cast a new bladed jig out and reel it back really fast to see if it pulls right or left,” Hite said. “If so I tune it just like a crankbait. The loop that the blade’s attached to â€“ you can tune right or left.”

Hite said he’ll also switch out a bladed jig’s standard clip with a double locking clip. Absent this option, he suggests a little drop of Super Glue at the clip’s closure.

“Ripping it through the grass can open up that clip,” Hite said. “This is insurance that it won’t open up on you.”

Now, if he’s getting a lot of short bites, or if he observes smaller batifish in the vicinity, or if a multi-day tournament sees the fish shying away from the pressure, Hite might bite about a half inch off his trailer to make his overall presentation more compact.

Also helpful â€“ highlighting the tails with a chartreuse marker. Whatever his efforts to increase his bait’s appeal, Hite knows well the value of securing his trailer.

“Always Super Glue the trailer before pushing it up on the keeper,” Hite said. “You’re always ripping through the grass and slapping the water to get rid of the grass.

“After you trailer falls down once it will never want to stay up right. But a little drop of Super Glue will keep your trailer in place so you won’t end up going through so many.”