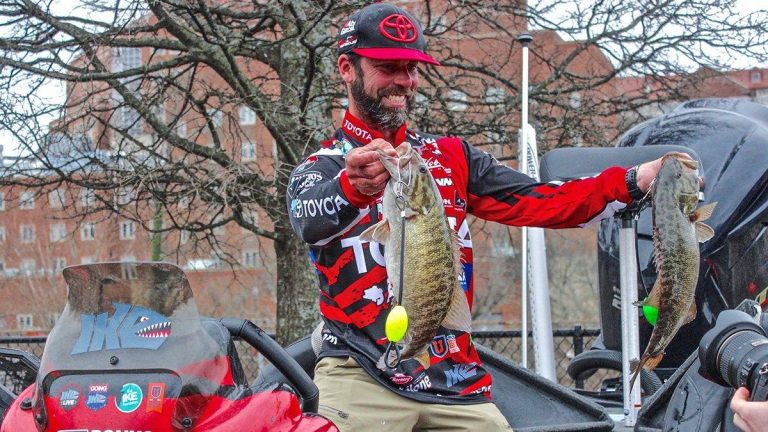 Targeting bass in the wintertime typically means tough fishing in the majority of country. While there are certainly exceptions, anglers usually have to work hard for five to ten bites a day during the winter months. The bass you catch are often big ones, so if an angler can land every bass that bites their bait this time of year, they can come back to the dock looking like a hero.

During winter fishing days, especially winter tournaments, it is extremely important to maximize your opportunities; the difference between hero and zero is incredibly slim. Full-time fishing pros know this all too well and agree that attention to detail is imperative.

To help you catch more bass this winter, I asked four notable professional anglers to weigh in on four winter bass fishing staples and explain what gear gives them the very best opportunity to catch every fish they trick into biting. 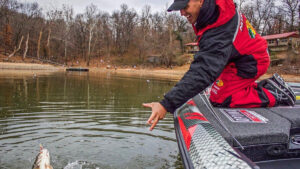 2016 Bassmaster Classic champ Edwin Evers said if he was narrowed down to one lure for winter bass fishing, a Sexy French Pearl-colored Megabass Vision 110 would be at the top of the list. Evers has spent a lot of hours on the water mastering this technique and divulged his preferred equipment for jerkbait fishing in the winter.

Evers selects a shorter, medium-action rod for cold-water jerkbaiting to augment his efficiency with this technique.

“Using the right rod is extremely important when using a jerkbait,” Evers said. “A rod that has a lot of play in the tip is critical because it gives those treble hooks an extra second to bite into the fish, but having a solid backbone in your rod is also important. The somewhat stiff backbone assists with making longer casts and getting a good hook set on a fish that bites on the end of a long cast.”

Evers’ reel choice for his wintertime jerkbaits might surprise you, as he employs an extremely fast 8:3:1 gear ratio reel that many anglers associate with fast-moving reaction lures or close quarters flipping and pitching.

“I fish with a really high-speed reel for my jerkbaits ,” Evers said. “Bass are typically feeding up in the water column when you get them to bite a jerkbait and I want to be able to pick up slack as quickly as possible when I see my line jump from a bite.”

Not only does a fast reel help Evers’ hook-up ratio when fishing with a jerkbait, but it allows him to get his bait in front of more bass, too.

“Cold-water jerkbaiting isn’t a technique you get to cover a ton of water with,” Evers said. “So in between my jerks and pauses I burn the lure back to the boat as fast as possible so I can make more casts in a day’s time. I’ll get a few more casts in than someone I’m fishing against which may not seem like a big deal, but one or two bites can make all the difference during the winter.”

Evers primarily throws 10-pound fluorocarbon when fishing a jerkbait in the wintertime and only opts for monofilament in certain scenarios.

“I get more bites on a jerkbait in clear water when fishing with fluorocarbon,” Evers said. “The fish can’t see it, I can make super long casts with it and it doesn’t stretch which helps on hook sets. I will, however, switch to 10 or 12-pound monofilament if I am fishing shallow water or over the tops of shallow brush piles with a jerkbait. Mono floats and therefore keeps the bait a little higher in the water column, which can result in a few more bites in those shallow scenarios.”

On top of his equipment particulars, Evers offered one more piece of advice on a mistake he has seen anglers make over the years.

“A lot of anglers simply pull too hard on jerkbait bass in the winter,” Evers admitted. “I see lots of anglers rush the landing with winter bass. Those fish aren’t going to fight real hard in cold water and typically only make one or two big runs when you get them close to the boat. I back my drag off once I have a fish hooked up and take as much time as I need to with them. The hooks that come on a Megabass are super sharp and a bass’ mouth is harder than usual in cold water, so there is no excuse for losing those fish other than rushing to get them landed.” 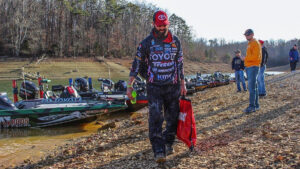 2016 Toyota Angler of the Year Gerald Swindle is well known for his prowess with a jig no matter the time of year. It comes as no surprise to learn Swindle has a 1/2-ounce Buckeye Lures G-Man Ballin’ Out Jig tied on all winter long and serves as his favorite bait to catch winter bass. Swindle makes a few minor, but important changes to his tackle when jig fishing in the winter.

The first change Swindle makes is dropping down in line size.

“I typically try to use as light of line as I can get away with in the winter,” Swindle said. “I generally use 20-pound Sunline fluorocarbon on my jigs but in the winter I drop down to 14-pound. The water is generally clearer during the winter months and I am usually fishing deeper. A smaller diameter line gives me a little better sensitivity and a few more bites throughout a day.”

In conjunction with lightening his line, Swindle opts for a medium heavy-action rod for winter jig fishing as opposed to the heavy action rod he relies on throughout most of the year.

“You have to be careful to not over power your line with your rod,” Swindle said. “If you use a big, stiff heavy action rod with lighter line you are liable to break off fish on your hook set. By backing down to a medium heavy-action rod I feel I’m doing a better job of matching the rod to the line.”

Outside of cold-water scenarios, Swindle fishes a jig on a super-fast reel with an 8:1:1 gear ratio, but during the winter he slows his presentation down some by using a 6:1:1 speed reel.

“I like 6:1:1 reel in the winter simply because it slows me down some,” Swindle admitted. “In my mind I am typically only fishing for 7 to 10 bites a day in the winter. If I can land every fish that bites I know I’ve had a good day, whether I’m fun fishing or it’s the Bassmaster Classic. Taking advantage of every opportunity in the winter is hugely important and I’ve found using a little bit slower reel stops me from jerkin’ the jig out of a fishes mouth!” 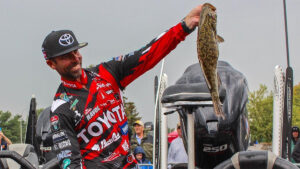 Finesse cranking is another go-to winter fishing technique for anglers across the country. Mike Iaconelli regards this presentation as his absolute favorite way to catch bass in the winter.  Iaconelli primarily uses two crankbaits for cold-water finesse cranking: a Rapala Shad Rap gets the most play from the New Jersey pro, followed closely by a Rapala DT 6 or DT 10.

“Something a lot of anglers fail to realize is that a bass really doesn’t need to eat much in the winter,” Iaconelli said. “The water is colder and their metabolism is much slower. So a bass doesn’t really have to feed out of hunger too often in the winter, but they can still be triggered with a reaction strike.”

A Rapala Shad Rap is largely considered one of the best cold-water crankbaits of all time. Iaconelli completely agrees with this notion and commonly employs the little balsa plug when bass fishing during the winter months.

“Throwing a Shad Rap on a spinning rod and reel will help you land more bass this winter,” Iaconelli said. “I primarily fish the No. 5 or No. 7 sizes and I use a medium light-action spinning rod. I use such a light rod because it makes it easier for me to make long casts with a tiny lightweight crankbait like a Shad Rap. Also, the soft tip and parabolic bend of the rod help me set on the hook on soft bites, which are very common throughout the winter.”

Line type and size is just as important to Iaconelli as the rod and reel he uses when fishing a Shad Rap in the winter.

“Sensitivity, castability and lack of stretch are all necessary functions of fluorocarbon,” Iaconelli said. “Most importantly though, fluorocarbon is extremely dense and helps slow the rise of my crankbait in cold water, making a Shad Rap less buoyant, which will get you more bites during a day of fishing. Lastly, using light line allows a Shad Rap to dive to its deepest depth which is another important factor in cold water.”

“Another way to slow the rise of a Shad Rap in cold water is to upsize the hooks,” Iaconelli explained. “I carry VMC Short Shank Round Bend Treble Hooks ranging from size 6, all the way to size 3 if it’s cold and I know I’ll be cranking. By swapping out the hooks I can control how fast or how slow my plug rises when I bump into something and pause it. Typically I want my bait to be as close to neutrally buyout as possible in cold-water scenarios.”

Jason Christie has been one of the hottest professional anglers in the business in recent years, and the Falcon pro is especially skilled when the water is cold. Before making the switch to solely fish the Elite Series in 2014, Christie used a YUM Flash Mob Jr. to capture an FLW Tour win on Arkansas’s Beaver Lake. While he admitted he has hardly fished an umbrella rig since 2013, Christie has the equipment subtleties dialed in when it comes to fishing this productive wintertime lure.

Upon initially testing out this new lure back in 2012, Christie learned using the proper rod for an umbrella rig was absolutely imperative.
?”Using a long, heavy action rod with a relatively soft upper third (or tip) is extremely helpful,” Christie said. “The soft tip helps me ‘flare’ or feather an umbrella rig, but more importantly it made it very easy to make the lob-style cast needed for that lure. Throwing a big, cumbersome lure like an umbrella rig flat wears you out if you don’t use a rod that makes your job easier.”

Christie’s second umbrella rig nuance was opting to use fluorocarbon over braided line.

“I felt like using heavy fluorocarbon got me more bites,” Christie said. “Whether I was fishing in dirty water or clear water, I’d throw my umbrella rigs on fluorocarbon. It gave me the confidence of being able to go behind other anglers throwing the same bait and still trick a few bass into biting.”

With five paddle-tail swimbaits and three to five willow blades, Christie realized it was very easy to “overwork” his umbrella rigs. Therefore Christie opted to use a mid-speed reel in a 6:8:1 gear ratio.

“You need a tough, heavy-duty reel that can withstand the wear and tear of an umbrella rig,” Christie said. “There’s a lot of torque on your equipment when fishing an umbrella rig all day and the Lew’s Super Duty was the best reel I found to handle the abuse. It has a big spool on it too, which you need when you are trying to make long casts with thick, heavy line.”

All four of these lures or techniques are excellent ways to target bass this winter. Before you head to the water to employ these techniques though, look over your tackle and ensure the rod, reel and line you’re using fit within the tips laid out from these four professional anglers.

Winter bass fishing is all about efficiency and following their formulas will help you maximize your opportunities.