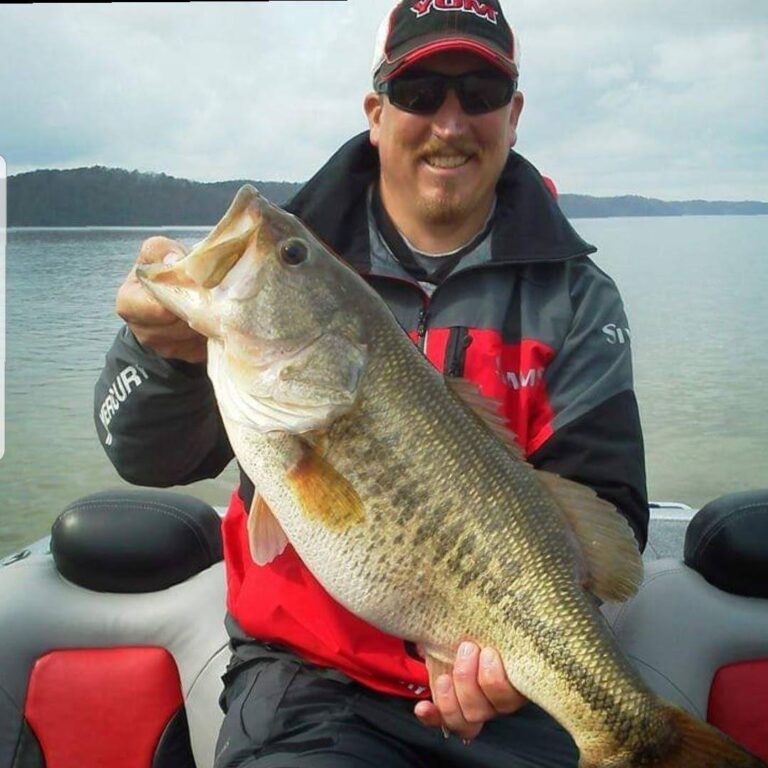 Pickwick has been showing out this week. In a fishery not really known for a surplus of double-digit bass like those in Texas, Florida and California, two fish over 10 pounds have now shown themselves thanks to umbrella rigs on the AL-TN-MS fishery.

Bassmaster Open pro and Alabama fishing guide Jimmy Mason fished with his long time friend and fishing buddy, Lance Walker, who most of you know now caught what was arguably the new Tennessee State Record Largemouth bass and released it to avoid killing the trophy fish just a few days ago.

The duo set out for a fun day of fishing on Wednesday on Pickwick to take advantage of what Mason termed “a perfect storm” on Pickwick Lake right now.

“The lake is setup perfect for catching big fish,” Mason said. “They are pulling 160,000 cfs which is producing a lot of current. The lake is 51-52 degree water temperatures. And there is a good stain to the lake. It’s not muddy but I call it that perfect stain to get those fish actively moving into shallower water.”

There always seems to be something about the big ones biting when the conditions seem to take a big change. You always hear of big bass being caught on those nasty days. This seems to be the same case.

Walker and Mason fished for about 8 hours and managed about 20 keepers, all on a Yumbrella rig with Yum Money minnows. There best five would have weighed nearly 28 pounds, but it was one fish that set the tone for the day. Early into the morning, Mason had a savage strike on the rig. He set the hook and after a short but powerful fight, Walker helped him land a 10.7 pound largemouth.

“That’s the third biggest bass I’ve caught in my life, and the biggest I’ve ever caught in Alabama waters,” Mason said. “Those days when you catch one of your biggest is just a special day. I sat on the couch last night watching TV and all I could think about was that bass and how hard it hit and fought in that current. I’ve fished all over the country for most of my adult life and it’s just an amazing feeling when you catch a double digit fish like that. I had a 13 pounder on Toledo Bend and an 11.18-pound bass on Lake Toho in Florida. But this one is special because it was at home.

“I love throwing the Yumbrella and Alabama Rigs for bass. It’s been a fun way to fish for bass. I lost some confidence in it last summer because there comes a time when they won’t bite this as good as say a crankbait. Last summer I’d be catching them every cast on a crankbait, pick up the rig and throw it 20 times and not catch a fish. Then pick up the crankbait and go to catching them every cast again.”

Mason describes this being the perfect storm for the Alabama Rig and other Umbrella rigs because we’ve in essence had 4 months of fall. The fish have continued to suspend and behave like they do in the fall all through the winter because it has been so mild. But there will come a time when the umbrella rigs lose some of their luster.

But he knows for the next few weeks there are going to be some big bass caught on it around the south and midwest part of the country.

“My biggest concern I guess with the umbrella rigs is that people take care of their fisheries,” Mason said. “I’ve never seen a bait that attracts such big fish like this does and folks are going to catch some remarkable bass. I just hope folks coming and fun fishing on the lake and enjoying what the rigs can do don’t take advantage of the fishery and throw all the giant bass they catch in coolers. Nothing wrong with eating some fish, but if we could just save the truly trophy fish to be caught again and protect how awesome a fishery like Pickwick has become.”

Here is the fishing tackle Mason used to fish with the Yumbrella while bass fishing this fall and winter on lakes like Pickwick, Guntersville, Neely Henry and more: