The temps are finally dropping to their normal levels in much of the country after several days and nights of below freezing temperatures through the Midwest and south. No doubt that the mild temperatures probably had the bass, crappie and other gamefish relating to areas and fishing presentations a little atypical for January in much of the country. Now that winter is settling in, a few techniques will really start to produce.

One technique we really like in the late fall, winter and early spring is working 45 degree banks and offshore high spots with a blade bait. This time of year the shad on many Midwestern and southern reservoirs are stunned by the colder temperatures. As the waters dip into the mid 40s, the shad struggle to survive and as the temperatures continue to drop, they begin to die – often in massive quantities.

We really like to capitalize on that stunned shad situation. The bass, and other game fish as well, know they can get a pretty easy meal without having to expend much energy, something they relish in the colder months. They can just ease around and pick off struggling baitfish from the pack.

Many anglers opt for a jigging spoon first during this seasonal event, but a blade bait often yields better catches as we feel it’s easier to cover a more horizontal swath of water. So if you know the fish are suspending or relating next to steep breaks but you’re not sure where along the breaks they are, you can simply cast and work the blade back to cover the water more effectively.

Where a jigging spoon is extremely effective at covering the water in one narrow band vertically, a blade bait is effective at both vertical and horizontal. The lead in the nose of the bait and thin metal body get it down quickly but also give it a very subtle but noticeable vibration. A blade fishes many different ways effectively as a result. That is why we feel it’s such an effective tool when the water cools.

As far as tackle goes, we keep it pretty simple. You can fish these on spinning rigs with light line, but we’ve found because they cast so well because of their very narrow and front heavy design, we’re able to stick with our baitcasting gear and 10 to 12-pound fluorocarbon line as the water is typically lightly stained to clear when we fish these baits. A good 6 ½-foot medium-heavy power rod with a moderate tip works well to cast the lure a long ways and detect the changes in vibration.

We also like a pretty fast gear ratio on our reels, which is another reason we opt for a baitcasting gear. We can use our 7:1 gear ratios to our advantage. Anytime you have a bait that you lift and drop, you impart a lot of slack into the mix and you need to be able to get the slack out quickly to hit those light-biting fish. The higher gear ratio makes controlling the fall on a semi-slack line a lot easier. A 1/2-ounce bait is a great one to start with. I occasionally go up to 3/4-ounce if I’m fishing in deeper water. 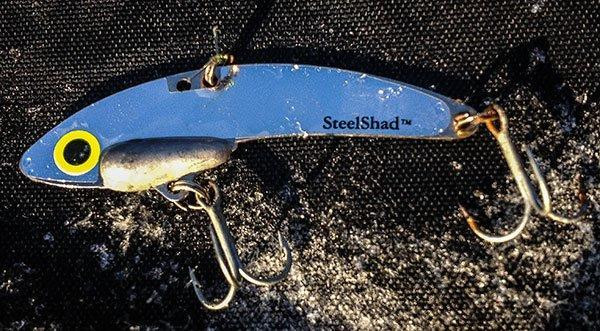 On the hooks we often swap the stock hooks that come on blade baits. Baits like the Steel Shad, Silver Buddy, Buckeye Jiggin Blade, Poor Boys Blade Bait, and others often come with standard bronze hooks. These hooks are fine for smaller fish, but knowing that we’ve taken 6 and 7 pounders on blade baits in the winter, we always upgrade the hooks. I really like the Mustad KVD Elite Triple Grip hooks and of course a standard round bend Gamakatsu hook is tough to beat. I do make one modification to my hooks.

Because where I fish is often littered with stumps, I will snip the down facing front treble off. Now if you just like to cast and wind the blade bait back in, you might not even need to do that. But what I’ve found is if you yo-yo the bait, as I often do, the bait drops nose first and then you jerk it up into the cover. So the bait raises its nose and exposes the belly hook to the cover. So I like to cut that front barb off. It doesn’t seem to affect my hook-up ratio with the fish, and I seem to get snagged a lot less.

If your bait does hit a piece of wood, then the phrase “knock on wood” is never more appropriate in fishing. Because the bait is designed with a weight in its nose, you can use that weight to often free the lure. When a hook is snagged, simply get close enough to the snag where you can pop several inches of slack line. With a series of 3 to 4-inch pops of the rod on semi slack line you can feel the bait knock against the cover. This repetitive knocking will often wiggle the lure free of the snag and save you a few bucks in the process.

There are a variety of presentations and retrieves that work with the blade bait, but a lift and flutter retrieve can be the best one to start with. As you continue to fish, you should continue to refine your retrieve to how the fish are reacting. You might start with a 2-foot upward snap of the rod but later find out short light hops of 6 inches work better. One typical rule of the thumb is the colder the water, the smaller and slower your hops should be.

Keeping control of your line is the most important part to yo-yoing a blade bait. You want the bait to have freedom to fall, but you also need to follow the slack so that if it stops falling early, you can stick a hook in the bass. So you raise your rod up to about 10 o’clock position, then as it falls you drop the rod tip so there is a slight bow the whole time in the line but it’s not laying slack on the surface of the water, reeling in slack to maintain a consistent bow. If the line suddenly stops falling before you think it should or you see it snap tight, it’s time to set the hook.

I am looking for certain types of banks and sharper offshore breaks this time of year with the blade bait. I like those banks that feature larger than average rock, stair stepping steep breaks or just a nice 45-degree bank where I can sit in 20 or 30 feet of water, yet still reach the bank. Some days I’ve found bass in less than a foot of water when it’s less than 45-degree water temps. So I like to try to get as shallow as I can on a cast, keeping in mind that you’ve got to move the bait immediately or it can snag. Then as I work it out on a steady retrieve, I will start my yo-yo retrieve when I feel there is enough water to start letting it drop safely.

On the yo-yo retrieve you also are keeping semi-taut line and anticipating when it hits bottom because you never really want it to stay there. You want it to just touch bottom and then you’ll raise your rod again and let it fall. So as you lower your rod, you’re taking up line watching to keep that small bow in the line to let the bait fall naturally. Then as it just goes slack, you raise it again. How hard and fast you raise the rod is really a matter of the mood of the fish. Sometimes you’ll snap it up. Other times you’ll barely pull it up, feeling that light thump as you do.

A vertical approach can be good too. Where a jigging spoon flutters and dances as it falls. A blade bait does its vibration as it rises and falls. Sometimes it can trigger fish that shied away from the spoon, and it can give you another vertical option in deep cold water. Try to avoid light pops on slack line as the bait will have a tendency to turn on its side and grab you’re line. You’ll know when it’s grabbed the line because it will suddenly feel heavier and have a lot more resistance in the water.

The bites are often not felt but perceived and the line is the best indicator so make sure you can see it and watch it. A blade bait is a great bait because it’s equally effective on smallmouth, largemouth and spotted bass. It will also catch other gamefish as well like walleye, sauger, crappie, stripers and more. So it can be fun fishing in the winter because you can catch other big fish that you weren’t expecting.