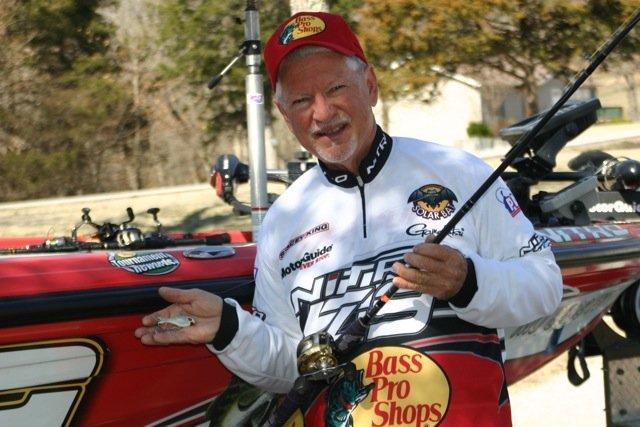 Going into the final day of the 2011 Walmart FLW Tour event on Beaver Lake, most people had their eyes on Brian Thrift and Ron Shuffield. Yet many still don’t realize how close Stacey King came to winning his first FLW Tour event with his final day heroics on a bait that is more than 40 years old and no longer in production. He ended up finishing second by a mere 2-pound, 2-ounce margin. And he had the fish on throughout the tournament to win.

The Megabass Ito Vision 110 jerkbait and Storm Wiggle Wart bite are well documented on Beaver Lake, and all the Ozark Lakes for that matter. But it appears, King, may have wrote a new chapter in the Ozark legacy by letting a cat out of the bag on a throwback bait he’s been using for a number of years in very small windows and situations in the colder months.

King did most of his damage the final day on a lure no longer in production by Cotton Cordell called a Super Shad.

“It’s funny to me because the bait has been around for years,” King said after hearing how much folks are talking about the lure. “It’s a real situational bait. There is really only a small window where I throw it in the late winter and early spring.”

What King found during the Beaver Lake event this year were the bass were suspending in the tops of trees in certain key areas. When it was overcast and windy he actually found he could catch bass cranking the Wiggle Wart and jerking a Megabass Ito Vision 110. However when it got sunny he pulled out his ace in the hole for this situation.

“I’ve fished this bait for 40 years and have a lot of confidence in it,” King said. “These bass were suspending in the tree tops and they were a little deeper than I could reach with the jerkbait. It only works really good when there is sun out and a little ripple on the surface. The trees might be in 25-60 feet of water but the tops were 10-15 down.”

There were two sizes of the Super Shad made — 1/4 ounce and 1/3 ounce models. King prefers the 1/3-ounce model because the 1/4 ounce was just too light. But even at 1/3 ounce, the bait sinks very slow and that is the beauty of the bait. And King’s tackle played into the bait’s performance as well.

“They were slamming it and then trying to take it down into the tree,” King said. “I lost two big fish the first day and a 5-pounder the last day because I just couldn’t get them out of the trees. That’s why you have to fish with heavy line.”

King’s application of the bait is fairly straight forward. He makes a cast either besided a tree or past a tree top and counts the bait down to 10-12. Then he just pumps the rod from 9 to 11 o’clock slowly. It’s not a hard rip. He pumps the rod and then immediately lets it fall on semi-slack line so that he can detect the light bites. Sometimes it’s just a tick. But on the final day they were feeding and knocking the bait.

“With the one treble hook, you would think it would get hung up more than you do. I only lose maybe one a year. I’ve got a pretty good supply of them, but usually if I get hung I can shake it loose. If you’re patient and don’t set it into some wood you can usually get it loose just shaking it against a tree.

“I don’t get to throw it very often in a tournament, but when it’s right it can really catch them. Last year on Table Rock, there were just too many dying shad and it didn’t produce for me. That’s what I mean about it being very situational and not being something that works all the time.”

The bait is about 2 inches, with a tail spinner and a single treble hook. It’s a silent bait with no rattles and King primarily sticks with shad colors. He had some white ones that he custom painted with grey backs and sparkle to make them more shad like for this tournament.

Mann’s made a similar bait that we reviewed a while back called a Super George, but the Super George was a one-knocker with a tail spinner and a bit heavier. More like a big plastic version of a Little George, which King acknowledged is a dynamite bait.

“That Little George sometimes works better than the Super Shad because it’s heavy and you can throw it further and work it a little faster,” he said. “It’s a dynamite bait too, but the high sun and slow dying shad, made the Super Shad a better choice.”

It’s very interesting when baits like the Super Shad come back around and perform in a big tournament again so many years being out of production. The folks at PRADCO sent us an old catalog page of the Super Shad and Stacey posed for photos with the bait so you know what one looks like at least. However, we’ve not seen many out on the market so coming by one might be hard. 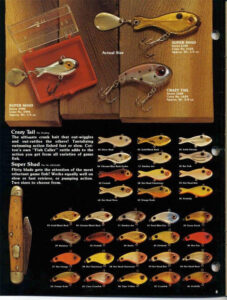 The whole story of this bait got me wondering if a guy could tweak a silent lipless bait, removing the back hook and replace with a tail spinner and do the same thing. Worth experimenting we thought. What do you think of our little test bait? This is a Damiki Tremor with an added tail spinner. We might give it a whirl they next time we’re faced with cool suspending bass with dying shad present in late winter and early spring.

It may not swim like the Super Shad, so it’s hard to say if it could be as good, but since the baits aren’t made anymore, maybe we can find something that will work in these small windows.